Proving ties to your home country when applying for a Schengen visa as a non-employed visa national?

A friend from Russia (Moscow) is planning to visit me in late August. She is about to apply for a visa but she's worried that they will deny her application because she doesn't have anything to prove her willingness to return. She is 22 years old an just got her first degree in university and even though she will continue studying in the next semester, she won't have any documents from the university until September.

Is it likely that she won't get the visa? If so is there anything we can do about that, like proving she has a return ticket / reservation?

Edit: I should add that she lives with her parents (who are paying for the trip).

You have a friend in Russia who is young, female, and living with her parents. She is a student and currently between semesters. You have never met in person and you want to invite her to Germany and that requires that she obtain a Schengen short-term visa. I assume that she has no prior history of travel from which her performance can be reckoned. She is having anxiety that her circumstances may cause her application to be refused.

Is it likely that she won't get the visa?

The outlook is poor. While everyone who wants to will begin international travel at some point, you gave no indication why a visit to Germany is appropriate for her at this particular point in time. It means her premise is weak and possibly untenable. Moreover, she has things which elevate the risk in issuing a visa to her.

If so is there anything we can do about that, like proving she has a return ticket / reservation?

Reservations (or a credible itinerary) are a requirement for Schengen visas, so having these things simply qualifies her to submit an application. They are easy to obtain and do not prove intent.

For the rest of your question, sometimes it is hard for a young person to acquire quality evidence because they are just starting out in life and have not built up the social and economic standing needed to be successful. If all she can present is low quality evidence, like school enrolment, your best course of action is to advise her to wait and propose an alternative.

For alternatives, you can consider meeting her in Russia. September in Moscow affords lots of great things to see and do before winter sets in. Another popular alternative is to meet in Turkey. The travertine terrace formations at Pamukkale, for example, is a great venue in the autumn. Meeting in person has the added benefit that it provides a premise for future applications: to maintain personal relationships. It's a great premise when it's properly established.

For your implicit question: is her anxiety well-founded? Yes, it's likely that someone in the circumstances you have described will have difficulty succeeding. Overall, the lack of a viable premise will likely be the show-stopper. The refusal reason associated with this is "Justification for the purpose and conditions of the intended stay was not provided" and sometimes they will throw in the generic reason: "Your intention to leave the territory of the Member States before the expiry of the visa applied for could not be ascertained." for icing on the cake.

I have plenty of first-hand experience regarding Russians visiting Germany, as well as a tangentially related account of obtaining an Austrian tourist visa.

I really do not think that the likelihood of obtaining a visa is as low as Gayot Fow made it out to be. I won't state any specific rules here (though you'd be well advised to check out http://moskau.diplo.de for exact regulations).

First, the situation, as presented by OP. The girl has everything booked in advance, tickets, hotels, the lot. Her parents would do well to provide a letter confirming their sponsorship of her trip with bank statements proving their income. This, theoretically, is sufficient to get a tourist visa. This is exactly what happened when my then GF and I decided to go skiing in Austria from Moscow. We were both students at the time, but I hold a UK passport, so I was free of the hassle of applying for a Schengen visa, while my GF had to be interviewed at the Austrian embassy. This was her first travel anywhere beyond the former USSR. But, and this may play a role, the trip to Austria was a package deal and the visas tend to go somewhat smoother in this case.

[...] I'm not sponsoring her (or even formally inviting her, unless that helps somehow) and she has the funds for the trip.

I'm not surprised, really. When I relocated to Germany, nobody among the locals could explain to me how best and quickest to invite a Russian (above mentioned GF) to visit me. It turns out, a formal invitation tremendously simplifies this process. Here (German language), for example, is a form to be filled out and handed in to the local Rathaus, where for a charge of 25 euro they will print out a nice colorful document like so, called a Verpflichtungserklärung: 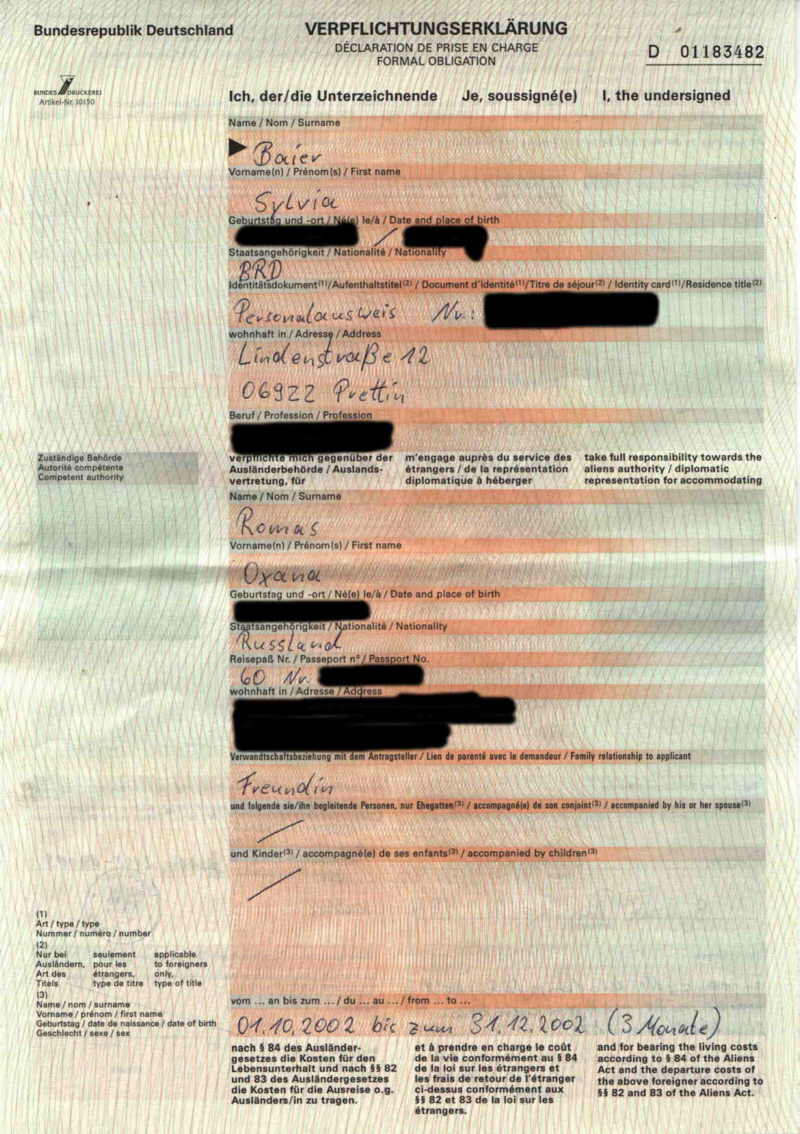 EDIT: I had not realized this at first, but check out the details entered in this form, I randomly found through a google image search - they're relevant. It is indeed a German inviting a Russian woman, whom she describes as "Freundin" (friend). Pulling in my discussion in the comments to Gayot Fow's answer, it is not of paramount importance that the relationship between the inviting and visiting parties is a very deep one. Friendship does not necessarily cause a verifiable paper trail, so in principle I can invite anyone I know to some extent. So long as the invitation is in good faith, everything should be fine.

I have not mentioned proof of close ties with Russia, but at least some piece of paper, proving she is a student is probably necessary (e.g. student pass). The authorities don't seem to be too strict about it, they don't need any special official form from the university, but they would like some confirmation. END EDIT.

This is essentially a declaration of your (OP's) financial commitment to the removal of the foreigner if they overstay. The OP then snail-mails this document to the visa applicant. Because Russian post is Russian post, take some sort of express mail option (don't remember the name, in the 10 euro price range) and it still will take around two weeks to reach the recipient in Russia. Things to also mail may include a photocopy of OPs German passport. Double-check on the German embassy's website.

What complicates this particular situation, is that the visitor has her own plans for travelling through Germany, so on one hand the OP would be saying "yeah, I take her in on my responsibility, she'll be staying at my place", but on the other hand, she won't be staying at his place, she's got hotels booked and all. Of course, no one expects her to stay at his flat the whole time, but why is he inviting her, when the tone of the comments seems to suggest that he isn't intending to even meet her? I don't know, how reluctant the Germans will be to issue a visa if they feel, that this invitation isn't really an invitation, but merely assistance in obtaining a visa.

The declaration of commitment puts some responsibility on the OP, of course. He has to have a sufficient income and sufficient space in his flat to offer an invitation. He'll need to provide proof of income (Lohnzettel).

All in all, this is a perfectly feasible undertaking if OP makes a formal invitation in good faith and the visa application form is filled out carefully. The details of how to fill it out are a different matter and I won't go into this, since when I invited my GF and later wife, she genuinely visited me, stayed at my place, and was financially supported by myself.

Not the answer you're looking for? Browse other questions tagged visas schengen germany russian-citizens or ask your own question.

9
Applying for a Schengen visa from Sri Lanka
14
How to prove strong ties back to country when one is self employed?
2
Can I live in the UK for a long time through repeat visits?
6
What is the transit procedure in AMS when en route from a Schengen country to the USA?