Is there a website for figuring out who secret carriers / super saver fares are with?

I've seen both on onetravel and kayak now, where it describes flights as:

Seven months ago, I asked on this site what that meant, as it was new to me. Now I'm used to knowing, and then got asked what a certain secret carrier was.

After a bit of sleuthing, I was able to work out, for example, which flight left Rome for Warsaw at a particular time, and that was fine. However, it involved some googling and looking up schedules.

Is there a site that you could just give it two airports and one of the dep/arr times and have it tell you the airline?

I admit it's not a terribly complex thing to look for, but if such a site existed, it'd save me some time :)

Indeed you can. Once again it's the Swiss Army knife of airline search engines matrix.itasoftware.com that comes to your rescue. 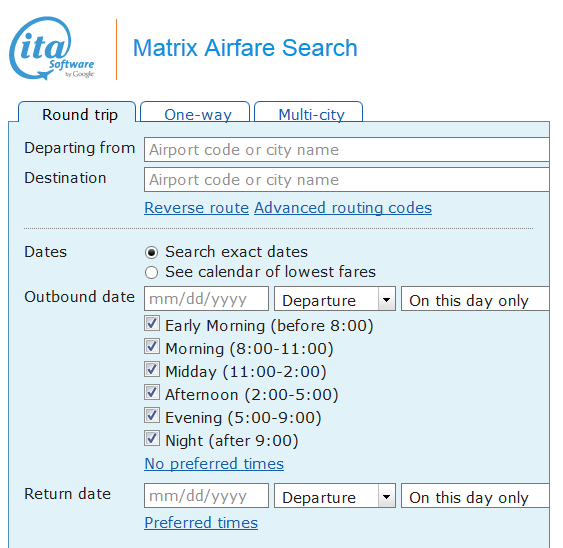 While it won't allow you to restrict searches to a specific time, it does allow you to choose specific time windows, which in most cases if you order according in ascending/descending order on the results page will allow you to quickly narrow down the flight that is being offered as a 'secret carrier'.

Not the answer you're looking for? Browse other questions tagged online-resources airlines terminology travel-tools or ask your own question.