Flighthub terms on canceling flight with refund due to potential terror threat?

My girlfriend has purchased a ticket via Flighthub.ca in March.

Due to yesterday's terror attack on Istanbul's airport, Ataturk, my girlfriend doesn't feel safe to go to Tirana via Turkey anymore due to potential risk. The flight is scheduled for August.

I tried reading Flighthub's terms, but it doesn't mention anything regarding this issue. The underlying tickets purchased via Flighthub are from Turkish Airlines.

Is there a way to cancel this flight with a full refund or at least change the route without additional payment? This is a matter of security, so could this be considered?

This is the purchase summary

If she completely cancels her flight, can she get those taxes back? How long does a tax refund take?

Turkish Airlines published a notice on their website regarding this very issue. Unfortunately the link is currently down (probably due to the large load), but here is a cached copy: 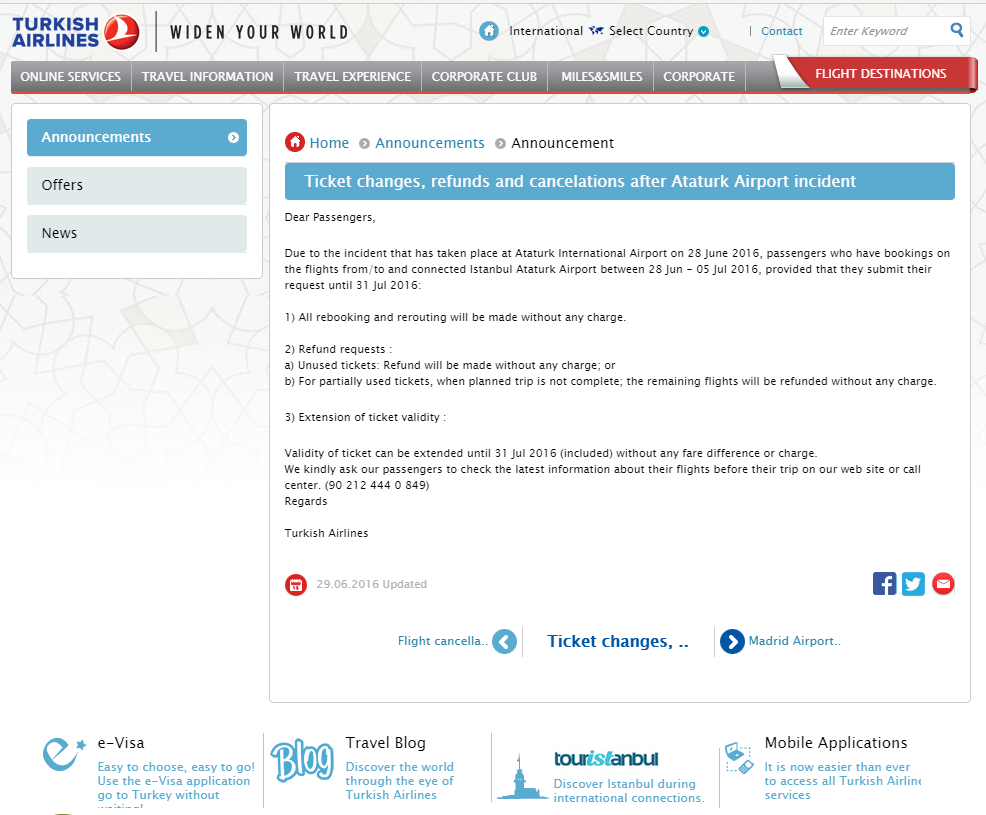 Dear Passengers,
Due to the incident that has taken place at Ataturk International Airport on 28 June 2016, passengers who have bookings on the flights from/to and connected Istanbul Ataturk Airport between 28 Jun - 05 Jul 2016, provided that they submit their request until 31 Jul 2016:

1) All rebooking and rerouting will be made without any charge.

Validity of ticket can be extended until 31 Jul 2016 (included) without any fare difference or charge. We kindly ask our passengers to check the latest information about their flights before their trip on our web site or call center. (90 212 444 0 849)
Regards

Unfortunately this does not apply to you as you are traveling in August. Even if it did apply in your situation, you would have a difficult time getting any recourse from Turkish Airlines as the ticket was purchased through a third party.

Thus, your only recourse is to ask flighthub.ca for a refund, and here is what they have to say about it:

The majority of airline reservations booked in economy class are non-refundable and non exchangeable. In some cases an airline may issue a credit voucher in lieu of a cash refund, which can be used for future travel with that airline. Please be aware that these vouchers are usually valid for one year from the date the original ticket was issued.

In the event where the ticket you purchased is refundable it will be subject to penalties imposed by the airline as well as a processing fee by FlightHub. Any cancellations will be handled on the day the request was made. Please note that any refunds can take as long as 6 weeks to appear on your credit card statement.

I had a somewhat similar experience, specifically with FlightHub, a couple of years ago. I bought a ticket on a small Russian airline from Russia to Israel, and that flight was later cancelled by the airline due to security concerns (rocket attacks from the Gaza strip). According to the airline website, they were issuing refunds. I expected a refund right away, but I was wrong.

FlightHub did absolutely nothing to issue the refund proactively. Whenever I called (often with over 30 minute wait times), they tried to call the airline with me on the line (more wait time), unsuccessfully every time. They seemed completely unwilling to do anything "offline" - they were only trying to deal with the issue when I was on the phone (despite promising to do so), forgetting about it as soon as I hung up. Out of all the callbacks promised to me, I was called back exactly zero times. I tried calling the airline myself, but the airline could only issue a refund at the request of FlightHub and not to me directly.

I finally decided I've had enough and filed a credit card chargeback, attaching all relevant information including a screenshot of the airline website (stating clearly that refunds would be issued for cancelled flights). This was quickly resolved in my favor.

Thus, when dealing with FlightHub refunds (assuming that you're actually entitled to a refund according to the airline rules), I would advise calling them a couple of times and giving them the chance to do the right thing, but if it doesn't help - don't waste your time and use the credit card route (or complain to industry associations, etc., if you didn't use a credit card).

37
Is there any personal benefit in formally cancelling a (non-refundable) flight?

10
When canceling a flight purchased with miles, do I get the miles back?
7
One way refund of round trip flight due to flight cancellation
5
Long Haul flight with 9 month old with potential no Bassinet
8
Need guidance on how to navigate Istanbul Atatürk Airport (IST)
9
Ticket Refund Rights with British Airways After Terror Alert Raised at Destination
2
How to get airport tax refund of unused flight with Wizzair 2 years ago?
1
Refund amount for cancelled last-leg flight due to a strike: Alitalia
1
International flight missed because of delay in national flight - Compensation options?
0
Chances for getting recompensation for bad/no treatment and getting sick due to delayed/cancelled flight
2
Get a refund for a flight to a country that has closed its borders due to COVID-19