I've just read about Yrjonkatu, which is a Finnish swimming pool where nudism is allowed, but only on separate days for men and women.

Are there any pools in Finland that allow mixed-gender nude swimming?

Also, the article Twenty reasons to visit Helsinki claims that nude swimming is a Finnish tradition. Is it really a Finnish thing, or just a quirk of that particular swimming pool?

In short, no. Even the Yrjönkatu pool is a bit of a historical quirk that has probably survived largely thanks to general conservatism (it's Finland's oldest and operated very much the way it did in 1928) and patronage from Helsinki's gay district Eerikinkatu (conveniently located right next door) — no, it's not a gay club or anything, but even heteros like me have heard that it's a bit of a cruising spot. 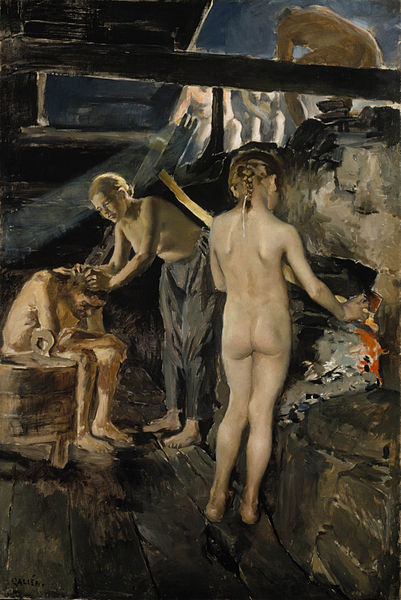 That said, nude swimming is indeed a Finnish tradition, but only in a very specific context: after a sauna! Families and close friends commonly go to the sauna together, and since you're already naked together inside, it'd be silly and cumbersome to put on bathing suits when you go for a dip in the lake. Also, most Finnish saunas are located in remote spots in the countryside, meaning there's nobody around to see you anyway (except possibly other nude bathers).

Unfortunately there are (AFAIK) no mixed gender public saunas in Finland, they're invariably either segregated into separate men's and women's sections, or they have separate shifts/days for each. Some small local saunas (eg. apartment buildings, university dorms or small hotels) might have a sekavuoro ("mixed shift"), but in practice these are largely a male domain.

But there's one place you can get your nude on, at least in summer: the nudist beach at Pihlajasaari, a short ferry ride from Helsinki, and one of only two in Finland that's mixed (the other is apparently in Pori). Although this, too, has a bit of a cruisy reputation, and it's only a "beach" if you accept large, flat rocks as a substitute for sand.

11
Is it possible to go with a mixed group of people to bathe naked at the Abanotubani sulphur baths in Tbilisi?
15
Can solo travelers go to a mixed gender onsen?
30
Sunbathing naked in public parks in Germany
8
Open water swimming in the Saarland?
4
Indoor swimming in Tel Aviv. Israel?
3
Russian citizen travelling US → Iceland → Finland → Russia and back. What visas?
4
How to interpret austrian sauna timetables
8
How do you behave in icelandic public swimming pools?