Can solo travelers go to a mixed gender onsen?

One ojiisan (old man) told me that obaasan (old women) are the only women who bathe without a towel in mixed onsen nowadays. Maybe that means I wouldn't be accused of having bad motives in choosing a mixed onsen, unless a fetish for old women exists in Japan.

Also, I've heard that mixed onsen are becoming increasingly rare in Japan, mainly confined to conservative rural areas (perhaps non-tourist oriented onsen?). Why is this happening? Are western influences to blame? (I asked the ojiisan about it, and he didn't know either)

Mixed gender onsen are indeed increasingly rare, and younger ladies frequenting them tend to wear swimsuits these days. Most of the remaining ones I know of are public, free and have no staff on site. They're also very basic, with usually just a single bath, so they're mixed more by necessity than choice -- there isn't really any alternative!

Nyuto (or, rather, Tsurunoyu, which is by far the biggest and best known bathhouse there) is a bit of an exception in being a big "commercial" onsen and having mixed-gender pools. A big part of which is that it's also unusual in another respect: the water is milky white (hence the name: 乳頭 means "nipple"!), so you can't actually see anything below the neck anyway. So, no, nobody will think you're weird if you go to the mixed section; a female friend of mine who frequents rural onsen reserves that term for the guys who sit outside the pool facing in with their legs spread, family jewels on display. (Hint: use the little towel you get to preserve a shred of dignity when out and about.) 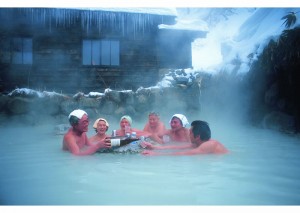 As for why, blaming "Western influences" is a bit too facile. Traditionally, Japanese didn't have baths at home, they went out to public, shared sento bathhouses, which were not segregated, or had token segregation at best (eg. a rope across the tub dividing it in two). These days everybody has bathtubs at home and sentos are an endangered species, so hanging around naked with members of the opposite sex is no longer common.

It turned out that while there were separate areas for men and women for the indoor spas, outdoors, there was only a mixed section, and a section for women only. So being in the mixed section was not so much permitted as mandatory!

There is a slang term for males who only go to mixed gender onsen to see naked females. They're called wani (ワニ). Many Japanese people I've talked with haven't heard of the term, though, and nobody accused me of being one.

Not the answer you're looking for? Browse other questions tagged japan local-customs solo-travel nudism hot-springs or ask your own question.

9
How can I go to a thermal bath in Merano?
10
Are there more mixed nudist baths like Friedrichsbad in Baden Baden in Europe?
4
How common are onsen that require swimming costumes in Japan?
5
Karaoke for solo travellers
7
Can tourists meet onsen geisha nowadays?
12
Mixed-gender naked swimming pools in Finland
19
What is the proper etiquette at Japanese onsen?
17
Are onsen attached to hotels available to non-staying guests?
19
What to do with long facial hair in the onsen?
2
Are there public onsen in Ogoto Onsen?