Are there any guest houses close to the Buddha Park in Vientiane, Laos?

In a recent question I was looking for day trips or weekend trips near Vientiane.

One of the very good answers was the Buddha Park (Wat Xieng Khuan), which is about 25 km from Vientiane. 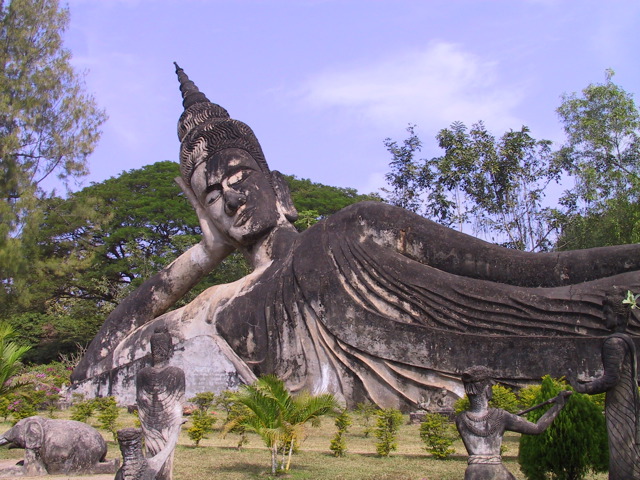 Now one of the reasons for a day or weekend trip is to get away from the "big" city and relax somewhere quiet for a day or two.

So far I haven't been able to locate any guest house, hostel, or other cheap accommodation near the Buddha Park and not near Vientiane itself. I don't mind places that don't specifically cater to foreigners or tourists. Just somewhere to sleep away from insects, shower in the morning, and laze in the shade reading a book.

Preferably strolling distance to the Buddha Park but a tuk tuk ride is OK.

(Please don't answer saying "Why not just take the bus from Vientiane because it's so cheap" - that's not my question.)

There are several cheap places near the Buddha park, but almost all of them are in Thailand. This is not really surprising since the Buddha park is in a relatively undeveloped place, in Laos, just across the river of a reasonably big town, called Nong Khai, across the border.

The only exception in Laos seems to be the Thon Pho Ngern resort north-west of the park.

The ones in Thailand are still along the streets (not via swimming across) 4-10km away from the park instead of the 25km to the city, so you could easily walk there. Since Nong Kai is the location of the Thai-Laos Friendship bridge, one of the major border crossings into Laos, I would assume that you should find pretty much any TukTuk to there from Vietiane and to the Buddha park. I would think that the hostels in the area advertise the park as a local attraction. There is even a shuttle bus across the bridge.

So a few days ago I decided to just hitchhike from "downtown" Vientiane to the Buddha Park and see if I would just stumble across some guest houses on the way. I departed quite late and didn't get any rides before it got dark so I only got as far as I could walk before too many angry dogs made me not want to push on.

I only got about one quarter to one third of the way and did pass a few guest houses. The one I stayed at was indicated on Google Maps with a slightly different name than on their road sign. Somvang Guesthouse or Souksomvang Guest House. 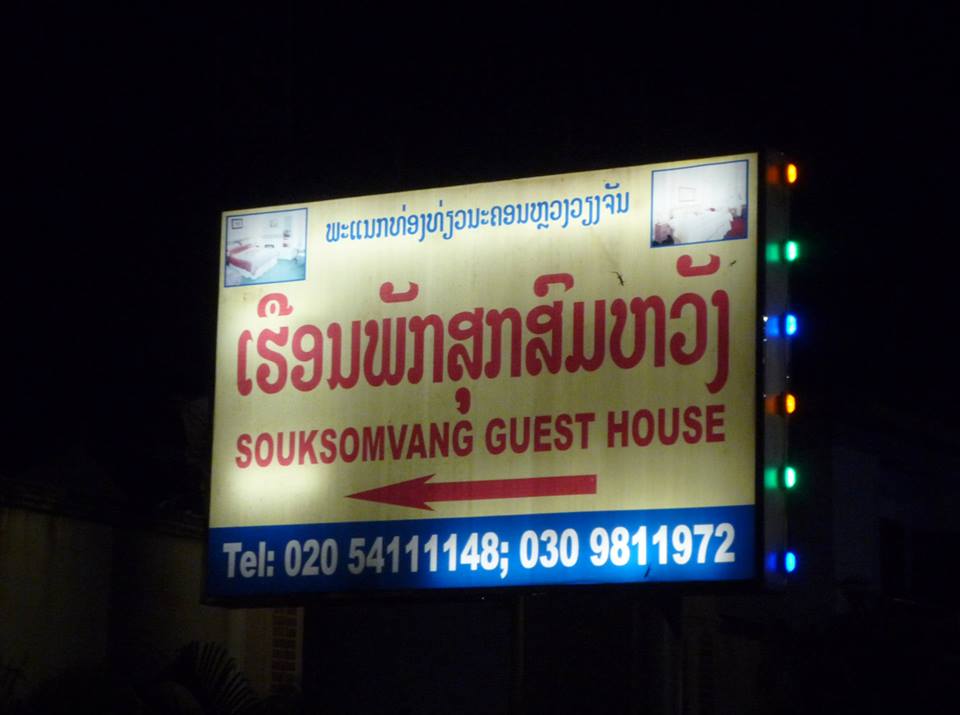 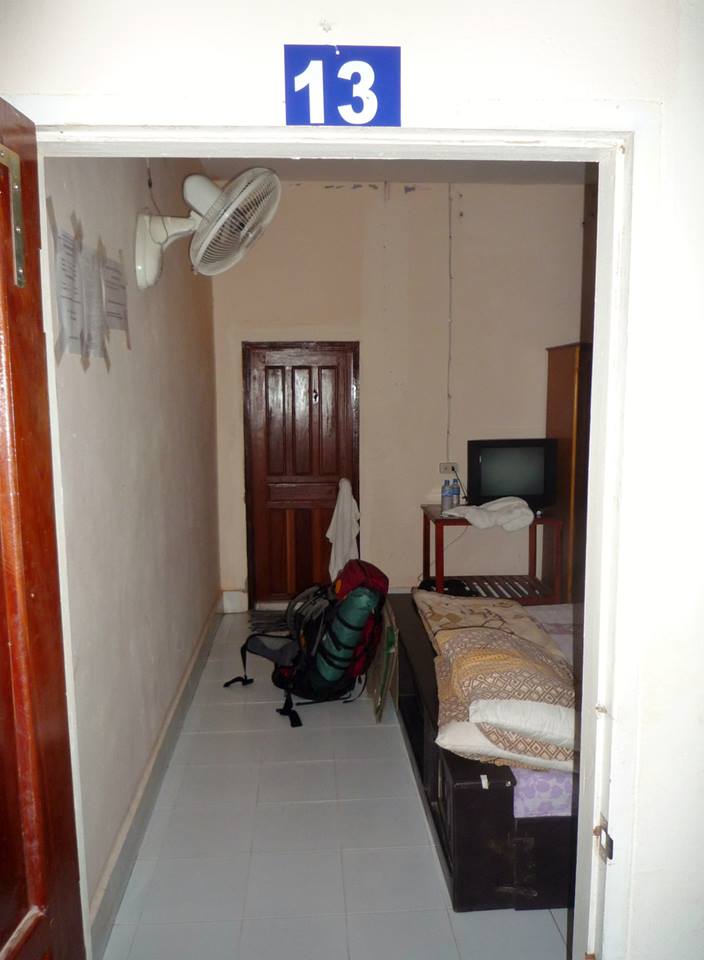 It's almost opposite the site of the new US embassy under construction but it's still 16.5 km / 10.5 miles from the Buddha Park. So further away than the resort that uncovery found and not within strolling distance. It is on the main road to the park however and it is cheap.

The problem is that it's disgusting. It looks quite fancy from the outside but these days it seems to be mostly used by prostitutes working in some of the "bars" or "night clubs" along the highway. For 60,000 kip ($7.60 / €5.70) you'll get a room with a fan and bathroom. The floor, toilet, sheets, and towels will be clean but nothing else. There were cigarette butts and condom packets nobody bothered to get rid of. But there were no bed bugs.

If you somehow end up here and can't get to the city itself and have low expectations you could crash here if you really had to.

The next morning I got rides easily. I thought I saw one or two guest houses a bit further but can't be sure as I was in a moving car on an extremely bumpy road.

On leaving the Buddha Park I headed further down the road away from Vientiane to see if there might be a guest house nearby in the other direction since there is more or less a village there. A local who knew some English told me there were no guest houses so I turned back.

Not the answer you're looking for? Browse other questions tagged budget accommodation southeast-asia laos vientiane or ask your own question.

3
Day trip or weekend trip from Vientiane, Laos?
5
Are there guesthouses or cheap accommodation on the road between Vientiane and Savannakhet?
5
When do boats actually race at the Boat Racing Festival in Vientiane Laos?
8
What are the risks drinking tap water in Laos?
12
Are there actually any hostels in Macau?
1
Is there a budget accommodation in Vientiane, Laos with kitchen?
12
Are there any hostels in Iran?
3
In which Nairobi suburb are there budget guest houses frequented by mainly non-tourists?
3
What are the current requirements to get a visa to Thailand in Vientiane (Laos)?
2
Are there vaccines requirements to travel from the USA to Laos?