I am travelling to Paris via Munich and I will reach Munich Central Bus Station at 7:00 AM. From there I have to travel around 40 km to Munich Airport within about 1½ hours. It will be too costly to go by taxi. Please suggest how to reach the Airport on time.

Are frequent buses available to the Airport at 07:00 or will S-Bahn be running at that time?

The S-Bahn certainly starts that early, as you can check yourself at DB BAHN - the stations are called "München Hackerbrücke" and "München Flughafen Terminal".

Bus arrivals are subject to traffic conditions, a friend of mine recently arrived an hour later in Munich from half your distance. Also, the S-Bahn is not always on time. You might want to take an earlier bus. (10 min to Hackerbrücke + up to 12 waiting + 42 on the train + 10 to the terminal = 1:14 h of 1:30 h. During major disruptions (which do happen occasionally when you are in a hurry), Hackerbrücke might not be served by one or both lines (starting at Hauptbahnhof instead), so add another 10 min waiting, plus 20 for a cancelled train, plus delays. Personally, I'd take a train at least 40 min earlier.)

There is also a Lufthansa Express Bus from nearby Hauptbahnhof, which takes about 45 min. First service is at 5:15, every 15 minutes.

There are two apps that show current timetables and disruptions: "DB Streckenagent" and "München Navigator" (has a live map). On the internet, there's the DB website, and a live map (tick the various boxes on the upper right menu). All of these are not totally reliable in case of major disruptions, but you will at least get an idea about the current state of the S-Bahn.

As the other answers have already mentioned, your mode of transport of choice is the suburban train, S-Bahn, identifyable by a large white S on green background.

You will arrive at the central bus station or ZOB in central Munich which is not far away from the central station and town centre. It is located exactly beside the Hackerbrücke suburban train station. The following map (Openstreetmap predicts three minutes which may be just a tad optimistic if you’re travelling with luggage; maybe four or five minutes are more realistic) shows you the way to go: 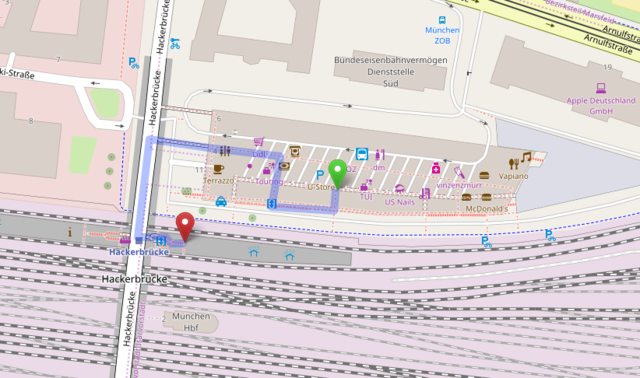 You need to find some way to reach the first floor. In case you don’t immediately see a better option, there are stairs on the outside on the South-West; just left of the taxi symbol on the map. After ascending, cross over the small footbridge onto the street bridge, the actual Hackerbrücke. A few metres southwards and you are above the platform, ready to go back down. There is an elevator to bring you down to the platform if you can’t use the stairs.

As you can see in the map, there is only one platform. You will want to take the first train that goes to Flughafen (Airport). It can either be an S8, in which case it will arrive on the southern track, continue via central station, city centre and East station and you can board any part of the train. The other possibility is an S1 which will arrive at the northern track. If you’re taking an S1 make sure that you board the part of the train that actually says *Flughafen (Airport) and not the part that says Freising. Typically, this is the rear part of the train — but recently I have also witnessed entire S1 trains going to the airport (and likewise entire S1 trains going to Freising), typically late night or on week-ends. The S1 trains get separated in Neufahrn, two stops before the airport. (If you accidentally got on the wrong part, you can still change in Neufahrn. The part bound for Freising leaves and the part going to the airport has to wait a few additional minutes.)

Both trains run in 20 minute intervals on weekdays and are interweaved so that there is a train every 10 minutes. Trains seem to be running all through the night albeit at larger intervals. But since 7 a.m. is well into rush hour in Munich, there will be trains.

The terminus, the airport station, is conveniently located underground close to the airport terminals. There are escalators and elevators to bring you to the ground level and into the terminals. Check beforehand whether your plane departs from terminal 2 (Star Alliance flights) or terminal 1 (all other flights) and follow the signs.

You didn't include which weekday you are going, but looking for Friday, Saturday and Sunday this week shows that service on the S-Bahn starts well before you arrive in Munich.

From the bus stop (I suppose you mean München ZOB) you have to get to München Hackerbrücke which should take about ten minutes by foot according to Deutsche Bahn, and then you can take the S1 or S8 to the airport. I think both terminate there so they should have written München Flughafen on them.

There is a train approximately every ten minutes (in fact, as pointed out by Jan in the comments, the two lines run every 20 minutes, but are not shifted by 10 but by 8 minutes) and the journey takes around 40 minutes, so there is no need to worry about missing your flight.

Above linked bahn.de also has an English version, so use it to adjust it to the specific day you are arriving on.

Not the answer you're looking for? Browse other questions tagged public-transport airport-transfer munich muc or ask your own question.

5
Amsterdam - How to reach from Schiphol Airport to Hotel Nes by cab and Metro?
44
Why is public transport from/to the airport so expensive?
8
Other public transport from Rotterdam Central Station to Europort
7
Finding the "Airport Express Shuttle Bus" at Hong Kong station?
6
Is there any simple public transport route from Ljubljana Airport to Lake Bohinj?
4
Need to catch an early morning taxi from central Paris to CDG airport!
15
How can I reach Marktoberdorf from Munich Airport? Disabled person
4
How to reach Munich Hbf from Munich's Airport (Terminal 2)? Disabled person
5
How can I can I get from Zaventem train station to the airport?
6
How to get from Geneva Airport to Metabief, Doubs, France by public transport?