Which information is stored in European Passports other than what is written in it?

The data that can be stored on them is governed by ICAO 9303 (specifically part 10 and 11). Most of the data that it allows to be stored is optional, and only required data is also printed on eMRTDs' identity pages.

From what I've seen, the data that's on eMRTDs varies greatly between country and country, and can even vary between different types of passports (such as between Regular Passports and Special Passports).

Even in the EU, there's a great variety in the sets of data that's encoded in the passports, however, in some cases I've seen countries share the same set of data (Belgium and France, iirc).

The list of files (rather, "data groups") supported by ICAO 9303 can be seen below: 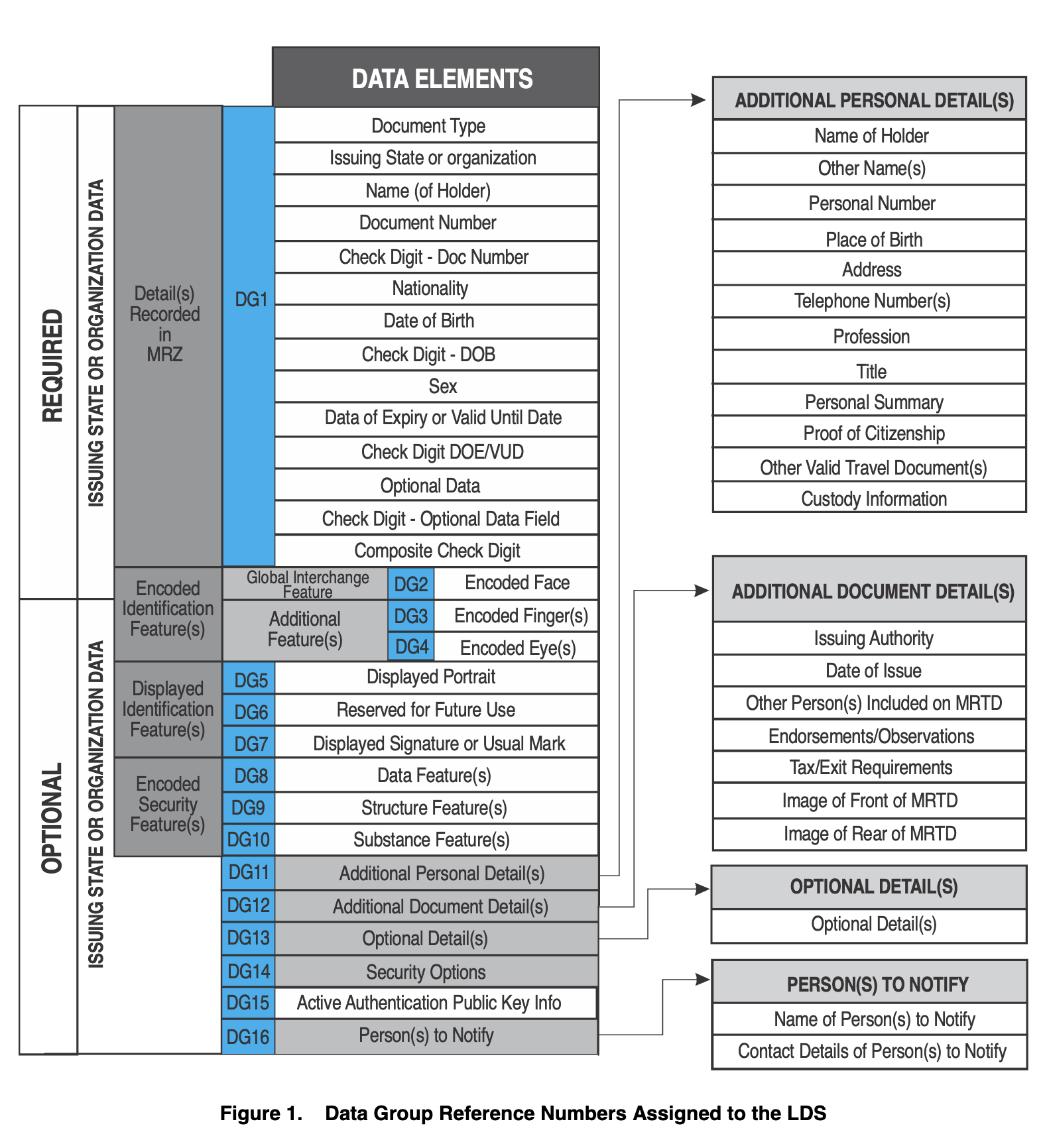 Out of the ~15 types of supported data groups, only 2 are required, and these are just the information that also is visible on the identity page of your passport: DG1 and DG2.

DG5 and DG7 are optional, but they represent data that's also visible on the identity page.

As for commonly included information that's not visible on the identity page:

The files on eMRTDs get write-locked after the initialization process. That means that they cannot be modified after the document has been issued.

These files are all hashed, and these hashes are then signed and stored on a PKCS#11 certificate on the chip (on a file called "Security Object"), allowing detecting counterfeit eMRTDs with fake or tampered information.

All files (except for those specifying authentication parameters) require authentication to be accessed. Most authentication schemes (BAC and PACE) require document's expiry, birthday and document number to derive the keys to authenticate. This is why passport readers at border control have to read the MRZ before they can read the chip.

Some countries (like Germany and Turkey) offer additional functionality on eMRTDs, though usually these are on eIDs and not on ePassports. These are usually country-specific and are not as widely deployed.

To answer your example questions:

The only way to know what exactly is encoded in your passport is to read it.

There's a number of mobile applications that allow you to do so on your own, such as ReadID NFC Demo for Android or ReadID NFC Me for iOS. While these apps may not be able to list all the data that's encoded on your passport, they should give a rough idea on what may or may not be in your passport.

By the way: the specification European and any other passports comply to is not a secret and it is publicly available (in six different laguages!): ICAO Doc9303; note that only a small fraction of what is specified there, gets actually implemented (e.g. no address in German passports; although the specification describes it).
Also reading and verifying most of the digitally stored data (not the biometric data though) of a passport can be done by anyone having the right tools (NFC reader or NFC-capable mobile and the right software; no special legitimation required).
This is not the case, however, in general for ID cards (e.g. German ID card).

Which information is stored in European Passports other than what is written in it?

In French passports, until 2008 the chip didn't contain any other information on the passport holder, then in 2008 the law changed and fingerprints of two fingers were added. Note that the chip does include a digital version of the photo printed on the passport.

With high probability, it contains exactly what is written on the hard plastic card, nothing more.
How would that other information even get there? The chip is read-only, so you would need a new passport every time they want to store that you travelled.

In addition to the information which is also written as human-readable text and the facial image that is printed in the passport, the chip also contains biometric data such as fingerprints (one exception is for passports issued by Ireland, which do not contain fingerprints). See https://en.wikipedia.org/wiki/Biometric_passport#European_Union_/_EFTA for details.

The information regarding travels abroad is not stored on the chip (but it may exist in some government database and could be retrieved by the authorities, when needed).

65
Is the RFID chip in e-passports read-only or is it read-write?

24
Biometric passport: How can I know if the chip is still working? Does it matter?
4
Getting a tourist visa sticker not put into passport, rather as a separate document
3
Easier to travel on a Swiss passport than American?
5
Will an overstay in India as a child affect future travel?
5
In what ways are Åland Islands passports different from other Finnish passports?
4
Are there known bans on the Machine Readable section of some UK Passports?
41
Why did a gate officer and exit immigration officer try to peel my visa sticker?