What is the weather like in south of Tenerife in early December? [duplicate]

Ask Question
Asked 4 years, 9 months ago
Active 4 years, 9 months ago
Viewed 397 times
2
This question already has answers here:
Is there a website with historical temperatures and weather data? (5 answers)
How can I find out what the weather is like in a given location on a certain month? [duplicate] (3 answers)
Closed 4 years ago.

I'm looking for a sunny escape from cold European winter. Therefore I was thinking about the canarian islands, more specifically Tenerife. As there are direct flies from my nearest airport.

Because I didn't make it to the beach this year, I would like to be able to do that. And there comes my question. I found very different information on what the weather and temperatures will be like. Most say it will still be "bikini weather" during the day. But I also read that the sea will be rather cold (below 20). So at least for me not very inviting for a long swim in the sea.

So can anyone help me with personal experience? What will the situation be like in lat's say Costa Adeje or nearby area?

Edit Thanks for the links to historic weather data. I already checked those. I'm really more looking for personal experience as mentioned. Numbers alone can be misleading or not cover all microclimas. And I heard there can be big differences on Tenerife

Tenerife South Airport is in the south-west of the island, near the large tourist spots like Playa de las Americas, where the climate is very warm and very dry.

For this airport, Wikipedia states average temperatures of 16-23°C, with extremes of 10°C and 30°C in December.

Since Tenerife is in the Atlantic, water temperature is quite cool with 20°C. Even in the summer, it's usually only about 23°C!

In addition, there's often some wind, even in May/September it could sometimes be a little too cold for sitting at the beach with nothing more than swimming togs.

So, it is possible to go to the beach, it's also possible to go swimming, but this would be a "cool" experience. If you are looking for a destination with summer-like weather, Tenerife (and also the other canary islands) are not the right choice for you.

I have not been on Tenerife in December, but (also on other islands) in May, September and October and can confirm the temperatures.

But remember: If someone tells you he was there once in December, and there was bikini-weather, he has only seen one or two weeks, in a single year. But one year can be warmer than the other, and even an exceptionally warm week can be followed by an exceptionally cold one. So I would thrust numbers taken over long periods more than the report of a few people.

You can find a complete atlas of the climate of all the Macaronesian islands through the websites of the Portugese and Spanish meteorological agencies. The atlas has legends in three languages: Spanish, Portuguese, and English. This atlas is far more specific than the answers in the duplicated questions.

You are right that the Canary Isles have strong microclimates in winter, in particular precipitation, due to elevation differences and wind. The north and east of the western islands will be rainy. The south and west will be sunny and dry. 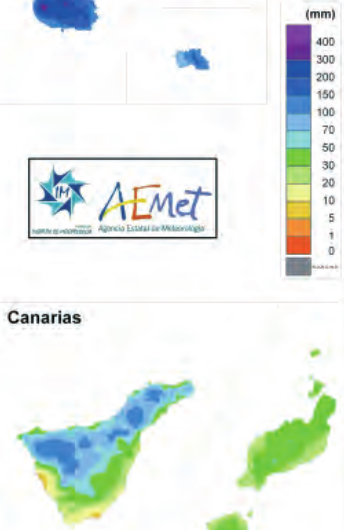 Excerpt from Figure 72 on Page 72 from the aforementioned atlas, showing mean rainfall in December. As you can see, rainfall in Tenerife in December varies from 5–10 mm in the southwest to 100–150 mm in the higher parts of the north and northeast! 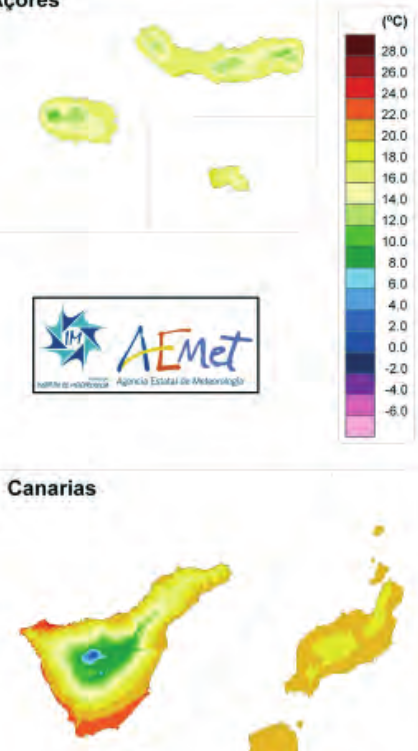 Part of Figure 51 from page 56, showing the mean maximum temperature in December. Here we mainly see the effect of elevation.

Not the answer you're looking for? Browse other questions tagged weather-and-climate tenerife or ask your own question.

14
Is there a website with historical temperatures and weather data?
7
How can I find out what the weather is like in a given location on a certain month?