How to Identify Trains in Austria and Switzerland?

Sometimes, it is desirable to identify a particular train rather than just finding any train that travels to a given destination. For instance, discounted train tickets in Germany are usually valid only on a particular train.

Train station display various information on scheduled trains, and my questions refers to that information. I would like to identify the information relevant for my particular train on such displays. This question is not about how to recognize the train when it is already waiting at the platform (as it might be too late then and I like to wait on the platform before the train arrives).

When travelling by train in e.g. Germany and France, information on trains is displayed along with the unique (per day) number of the train (cf. e.g. this display from Germany, or this one from France).

Now, I might be able to figure out which one is my train (even though it still seems risky to me, if an earlier train to the same destination happens to be delayed) if I know its departure time and its destination. However, especially for the destination, this is unlikely - unless I happen to ride that train all the way until its final destination, neither am I interested in where the train travels to after I got out, nor do I usually even know (at least German online tickets for trains do not indicate the final destination of the booked trains, I would have to specifically retrieve that information from the online itinerary system).

Practical example: When taking an IC train from Mannheim (blue marker in the map below) to Mainz (green marker), depending on the exact time of travel, the final destinations of these trains (red/orange markers) are Düsseldorf, Greifswald, Hamburg-Altona, Magdeburg, Münster, Dortmund, Cologne, and Mainz itself. While many of these are at least roughly on route when extrapolating the path from Mannheim to Mainz, it is, for instance, geographically rather counterintuitive to travel toward Magdeburg or Greifswald (orange markers) when one wants to go to Mainz:

So, even if you know where the final destination displayed for a train is, it is by no means guaranteed you could, without any further info, use that information to determine which train is yours.

Therefore, my primary question is: How are travellers "officially" supposed to identify one's train on such displays in Austria and Switzerland; what's the idea on how to use the information displays there when the train number is not visible?

A secondary question, which is kind-of contained in the above (only if someone happens to know; I think it would improve the answer), is why train numbers are not displayed as well in Austria and Switzerland, as internally, surely they must exist (obviously so for e.g. publicly numbered German trains that cross the border).

*Interestingly, the source page of that Austrian photo also shows various displays from Austria that do show train numbers. So, in Austria, the issue I observed only seems to apply to some stations.

EDIT: While Swiss and Austrian railways may not offer any tickets bound to specific trains, German railways sells such tickets for trips to and through Austria and/or Switzerland. As such, it is usually necessary at some point to identify a particular German train in a Swiss or Austrian station.

EDIT2: Another use case would be travelling in a group where some people board a train at a later time than the others. In such a case, they would need to make sure they are referring to the exactly same train, not just a train around a certain time towards a given place.

The railway structure both in terms of pricing and network is very different in the Alpine countries than in Germany. Broadly speaking in these countries, it's expected that passengers will not plan their journey based on price, but that they'll just show up when they want to travel and take the next appropriate train.

While there is some tariff discretion and there are some discount advance purchase tickets tied to specific trains, these forms play a much smaller role and passengers are allowed to take most any train that is getting them to their destination with most any ticket. Hence the system expects customers to look at the board and find the highest speed train that will get them to their destination. It's expected that customers know the hierarchy (Austria) of fastest to slowest trains and choose accordingly (depending on which are departing next). So the type S, R, RJ, ICE, etc. is deemed more important than the train number. You can read about the Austrian fare exceptions that do require you to take a specific train under the same link.

It's expected that customers generally know routes of trains (likely because there are fewer lines), or can figure out which departure they need based on time since there are fewer major stations, and most of the major stations are terminuses. Otherwise as these railways are generally better staffed than in Germany it's expected that there is staff to help customers find the correct train.

The train numbers ultimately are usually on the train doors, although that might be a bit late if you realize you're in the wrong spot to board a train a short stop in a intermediate station. 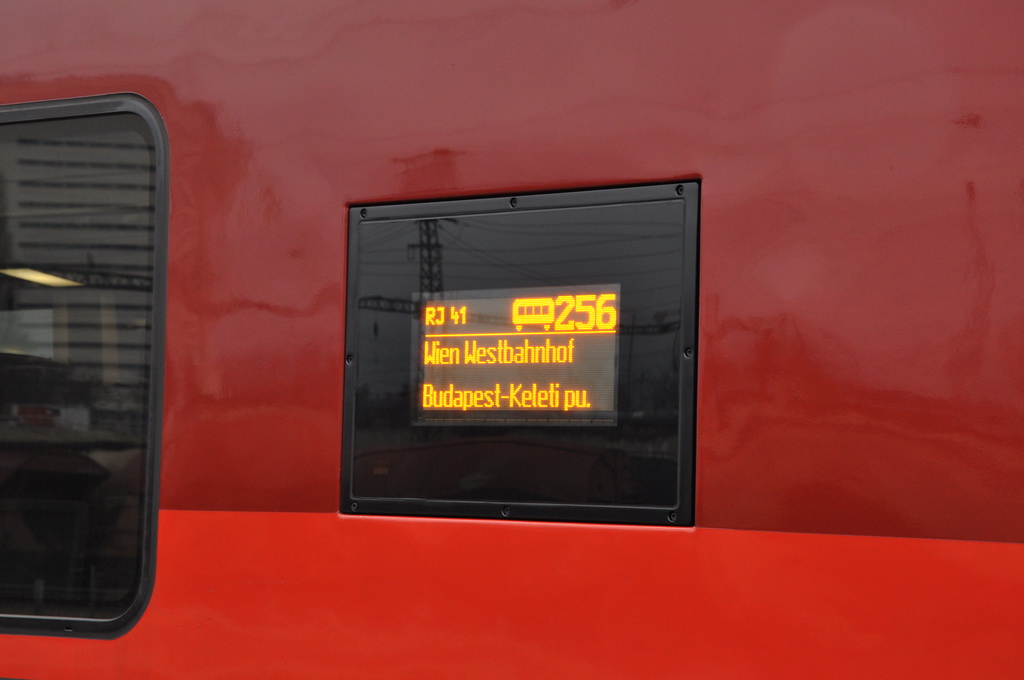 If you know the type of the train, the departure time and the destination you can uniquely identify a train — I don't know of a single case where two trains to the same destination via different routes depart at the same time. In those cases, the platform is always shown in electronic journey planners (and often on your ticket). If the scheduled platform is changed that is clearly shown at the displays in the station.

Also the displays show all important stops on the way (especially those where you usually change trains), so knowing the destination is usually not needed.

The listed departure times in the station are always the scheduled ones. For delayed trains they add an additional note about the delay but keep the original time.

Additionally, at least for all DB tickets you are never bound to a specific train while inside Switzerland or Austria. You are only required to take that train from the border station on to Germany. But SBB and ÖBB do sell tickets that are bound to a train in their respective countries.

You might also note that at least for Germany, your assertion that the train number is always listed on the departure board is not correct. Your example photo shows multiple such instances, e.g. "S 1" is not the correct number for that train. But in Germany that only happens for trains for which no bounded tickets are sold.

While the previous answers justify the reason for it not being there, you can find it. At least for ÖBB trains, head over to the Fahrplan (i.e. the Timetable). These can typically be found around the stations or on the platforms. You will find that every train, even the S-Bahn, has a unique Zug-Nummer (Train Number). 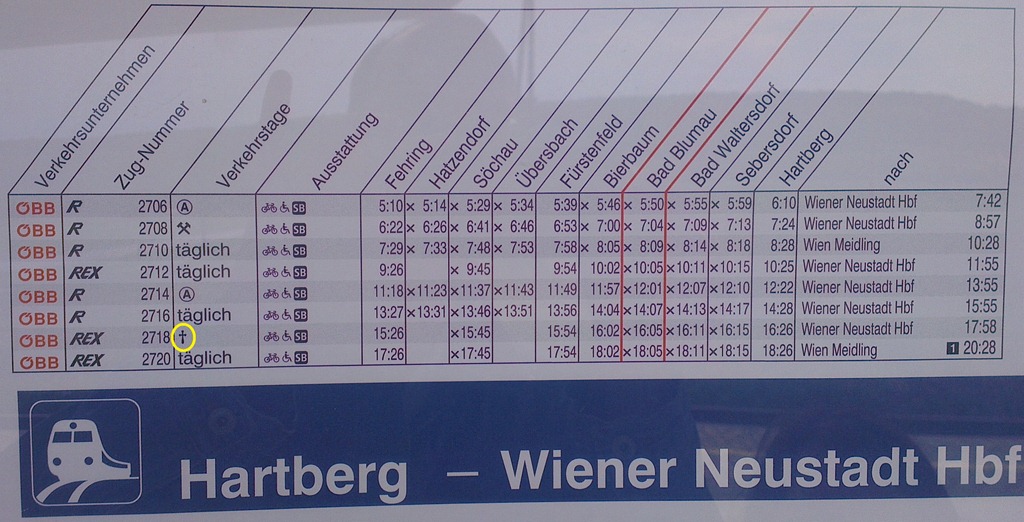 Source (Ignore the yellow circle. It just indicates the train does not operate on a certain day)

At Swiss train stations, there are blue information tables on the platforms that tell, for each long distance train, the train number in addition to the exact composition. They're usually located next to the yellow time tables (apologies for potato quality):

Of course, you also find the information in paper timetables, the online timetable and mobile apps, as well as on the trains themselves, as indicated by @Carl.

Not the answer you're looking for? Browse other questions tagged trains switzerland austria or ask your own question.

7
How can I reach the Austrian alps by public transport from Vienna?
4
A website that would find me a train from Basel (Switzerland) to any city, and then to Berlin for the lowest cost
13
How much in advance to book Swedish train tickets to get lowest prices?
20
What kinds of compensation can I get from Deutsche Bahn for canceled and late trains?
17
Can I drive in EU states and Switzerland with German proof of a surrendered U.S. license?
3
Do I really have to print my ÖBB ticket for international travel on ÖBB trains?
7
Is there a website with up-to-date info on border checks in the EU due to Covid-19?
6
COVID related travel requirements for train journey Austria -> Germany -> Netherlands
0
Train from Zurich to Salzburg and February 2022 COVID restrictions