Am I missing a seat reservation or any other part of my ticket?

I bought advanced singles (from the East Midlands Railways website) to Hope (Derbyshire) from London and back, which has an East Midlands leg till Sheffield and a Northern leg further to Hope (see image below).

A (10664) is the ticket for my onward journey, and it states that it has reservations on C (10665-10666), which specifies the times and seats for both legs of my onward journey. D (10661-10662), the ticket for my return journey, has my seat reservations for the Sheffield-London leg but doesn't mention anything about the first leg on Northern - neither the time, nor the fact that it's even reserved, unlike in C. For some reason, the machine also printed a blank card B. In the numbering of coupons, 10663 is missing.

Did the machine fail to print a coupon? If yes, what should I do next? 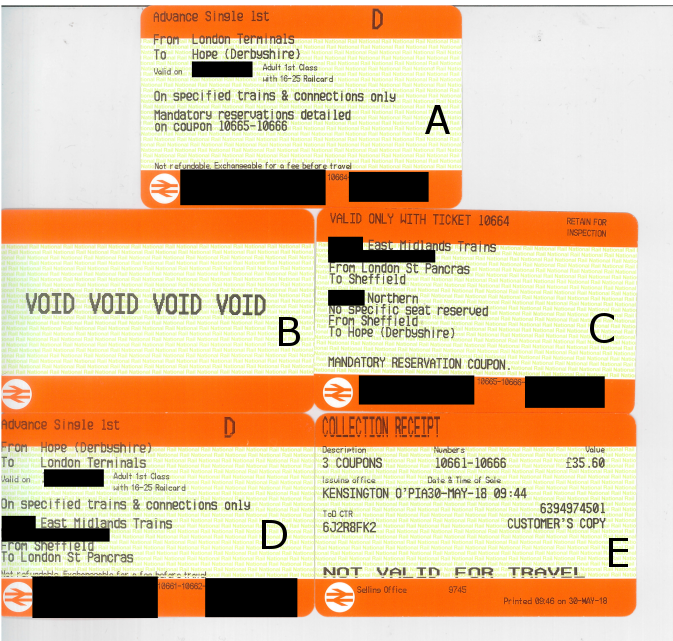 I think you're OK. What's probably happened here is that on the way out, the machine couldn't fit your reservations on the same coupon because there are two of them, so it's instead given you a separate coupon. Advance tickets will enforce that you travel on specific trains but only when the train is marked as reservable in the database (this is independent to whether or not there are actually seat reservations). On the way back, however, you were probably scheduled to travel on a Northern service which is not marked as being "reservable" in the database, so the machine could fit all your reservations on the same coupon as your ticket. This disparity between outward and return journeys probably confused the machine and led it to print the extra "void" coupon.

If you want to be sure, on the Northern return service in your itinerary you're due to travel on, have a look on http://realtimetrains.co.uk and see if you can find it. Go into Detailed/Advanced mode, and see if you can see "Reservations available" listed at the top. If you can't, then this is what's happened, and you're fine. if, however, the service shows as having reservations available, then you should probably be more concerned, as you should have received a coupon for it. If you want to be doubly sure the official source for this is the electronic National Rail Timetable but given RTT is linked directly to the schedule database I would be happy trusting it for this purpose.

Given this situation, what about validity? Well, you're allowed to travel on any "suitable connecting service", which is taken in practice to mean any service along permitted routes for your journey which is not marked as reservable in the database. So this means that on the way back, you can travel on any Northern service from Hope to Sheffield as long as you can see on RTT (or the eNRT) that it isn't listed as reservable, and as long as it has a valid minimum connection time (7 minutes at Sheffield) until your East Midlands Trains service - at least if you want to be covered for delays. On the way out, however, you are of course restricted to the train printed on your reservation coupon.

Not the answer you're looking for? Browse other questions tagged uk national-rail or ask your own question.

8
Do seasonal flights from Trondheim to Edinburgh, London, or any other part of the UK exist?
3
Is the Travelodge chain in the UK part of any loyalty programme?
7
Lost/missing half a UK rail ticket (advanced purchase), can I get it reprinted?
5
What's the point of reserving a seat when purchasing an Off-Peak/Anytime train ticket with National Rail?
8
Is stopover allowed with an offpeak train ticket in UK?
45
Who compensates my UK train ticket when the train in the ticket didn't exist?
6
Compensation for Delayed Train Due to London Underground Issue