Travel options from London to Edinburgh

Flying is the fastest option (1h10), but you'll have to take into account:

So this will probably bring you closer to 3 hours total, city center to city center. Flying though London Heathrow will take even more time (to get there: 15 min train from Paddington station every 15 min, and because the minimum conformance times are higher). And even worse for Stansted: the Stansted Express, the fastest route available between Stansted Airport and Central London, takes 47 minutes from Liverpool Street.

London Gatwick and London Luton also offer a few flights to Edinburgh but have longer conformance times and are way further from the city (so there's no point flying from them if you're inside London, the train is faster). See here for the full list of airlines and destinations served from Edinburgh Airport.

By train, the fastest is with the East Coast Main Line: 4h20, running every hour from 7am to 7pm from King's Cross (some additional trains take ~5 hours). But there is also a sleeper service from London to Edinburgh (the Caledonian Sleeper Lowland Route), which can be interesting to gain time:

Travelling southbound, the Caledonian Sleeper departs from both Edinburgh Waverley and Glasgow Central at 23.40. On a Sunday the service leave a little earlier at 23.15. The Glasgow Central train stops at Motherwell with both trains then joining at Carstairs. The train crosses the border stopping at Carlisle and then at Watford Junction before arriving at London Euston by 07.10, plenty of time for breakfast before having a whole day in London. Travelling northbound the Caledonian Sleeper Lowland route sets off at 23.50 five nights a week and at 23.27 on Sundays. The train splits into two portions at Carstairs with arrivals to Glasgow Central at 07.20 and Edinburgh Waverley at 07.20.

Driving is not a fast option (over 7 hours), but an overnight bus can also be an efficient and cheap alternative worth considering: the Megabus Gold which costs around £50, roughly 23:00 to 07:15 the next morning.

You might also want to know that flying (especially from London City Airport with views over London) and taking the train during the day (with preferably a seat on the right-hand side for the part between Newcastle and Edinburgh) are the most scenic.

As someone who does this route maybe twice a month my preferred options are as follows:

The fastest option is by air. There are frequent services from all of London's airports, including the centrally located London City airport. The flying time is about 1 hour. If you are only visiting Edinburgh for a day or less, this is the sensible way to go.

However, Edinburgh airport is not centrally located (there is a tram, but actually it is faster to take the old airport express bus or a taxi) and it takes another 20 minutes or so to get into town. Also if you are not near a London airport, you may spend some time getting to the airport. Security formalities may take another few minutes.

The alternative is to take the train from Kings Cross. The fastest north bound train takes four hours and twenty minutes, although some trains take closer to five hours. On the flip side, Edinburgh Waverley station is in the centre of Edinburgh.

The fastest commercial option is to fly at 1 hour 10 minutes. The train is roughly 5 hours and driving is also roughly 7 1/2+ hours in excellent conditions. 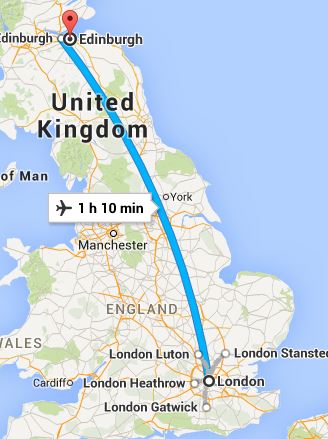 Privately, you can hire a helicopter and reduce the flight time by about 10 minutes. I have also taken empty leg flights from Havering Airport (east of London).

You can use Google Flights to get the details.

As i was often traveling on that route, i recommend to use plane.

From Stansted it will take you 70 minutes to get to Edinburgh Airport, then you can take bus 35 or 100 ( I recommend 100, as it goes straight to centre). Currently you can take tram as well. Journey from Airport if you take 100 bus, will take you 30 minutes, and you will have bus every 10 minutes.

Not the answer you're looking for? Browse other questions tagged air-travel uk planning scotland or ask your own question.

5
How early before departure can I reserve train tickets in the UK?
0
I'm trying to get from London Heathrow to Edinburgh

14
Are there any small towns near Edinburgh with good access to rural hiking routes?
8
Do seasonal flights from Trondheim to Edinburgh, London, or any other part of the UK exist?
5
Itinerary to Scotland from London
7
What is the fastest option to fly from London to Sydney?
7
Do I need a passport to visit Edinburgh in Scotland from elsewhere in the UK?
4
All day vs street parking in Edinburgh and Glasgow
1
Check in luggage on flights between London and Edinburgh