Token showing authorization to apply to enter the territory for which it was issued. Don't forget to include your citizenship when asking!

A visa is a token giving rights to apply to enter or leave a country. Visa are usually attached by pasting a sticker or stamping it in a holders passport or other travel document. 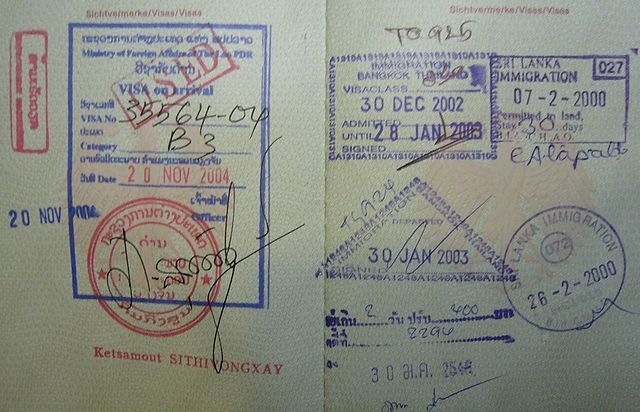 Visas indicate that the holders thereof may present themselves at a border and request entry into the issuing country. Visas may have both a duration of validity and a visit time limitation.

Visit time limitation, often 15, 30 or 90 days, here means the maximum period of time allowed in country if entry is granted. The person responsible (border control) for allowing or declining entry may decide upon a visit time duration that is less than the maximum available for the relevant visa, or decline entry altogether.

The latter (visit time limitation) is a matter of “What is the longest I may stay if I am permitted entry?”. The former (duration of validity) is a matter of “When is the cut-off for use it or lose it?” For the latter it may be worth bearing in mind that, at least in theory, the visa application process is to permit countries to ban entry to people they consider undesirable. Therefore a time limit is necessary to allow for a change in circumstances, regarding the deemed desirability of a visit by a specific individual, that my take place long after a visa was issued.

“In theory” because in practice visas are essentially just a means to tax prospective visitors, often tit-for-tat in response to the charges imposed by the home country of the would-be visitor on visitors from the country issuing the visa.

The word visa should not be capitalised.

“Days” for visas are calendar basis and not hours basis. For example, noon (local time) to noon is at least two “days”.

Some countries where a valid visitor visa is necessary only to enter and your time to stay is set at the border:

Some countries where you need to leave by the time your visa expires:

Visa questions have been a large proportion of those asked on this site. So much so that there was even an Area 51 proposal to create a separate site just for them (but the proposal was squashed by SE within hours). Consequently there are numerous tags closely associated with visa questions. For a start are those that categorise a particular type of visa:

Some of these are terms specific to one 'country' (as marked), others may apply much more generally. For those that are country specific terms, country-specific tags should not normally be applied to the same question.

Not specifically a tag for visas but usually applied for Type C (and sometimes Type A visas) is schengen where often 90-180-visa-rules is relevant, though this is not only for the Schengen area.

There is no need to add the visas to a question tagged schengen.

We do also have questions where no visa may be required, for example freedom-of-movement but alternative processes may apply. For these we have:

Some of the above may be applicable to a number of countries of issue, for which we have, in addition to the tag eu for a country group:

for all of which only the tags uk or common-travel-area should be used in respect of visas. Tag uk (or sometimes ireland) may also be enough by way of a 'country-specific' tag for some questions regarding the BIVS.

However, because of certain peculiarities, for Schengen we also have:

Whichever visa from whichever country, the citizenship of the applicant is very likely to be relevant, so should always be mentioned where one of the other tags includes 'visas' or is schengen. For that we have, in addition to tags dual-nationality and stateless-persons:

To obtain a visa some details will have to be provided. For questions about those we have, in addition to the more general tags applications and paperwork:

For places that might be involved with processing applications we have:

Processing times may also give rise to questions, for which we have tags application-status and premium-services.

Visa applications may or may not be granted, for the latter case we have tags visa-refusal and visa-rejection. Note that on TSE refusal and rejection have particular meanings (ie, as usual, check Usage guides if in doubt).

And then there may be exceptions to all of the above, such as for special-economic-zones.

Does a Canadian need a visa to volunteer in Hawaii?

ESTA application question: Have you ever been issued a passport or national identity card for travel by any other country?

ESTA application question: Have you ever been issued a passport or national identity card for travel by any other country?

UK visa to visit a partner in hospital (after prior rejection)