Why are two currency options available when paying via card at airports abroad?

Whenever I shop at airports abroad, I always get asked to choose between the currency options while paying via my credit card.

One is the local currency and another one is the currency of the country where the card is issued in[India(INR) in my case].

Why are there two options? And what are the benefits of choosing one over the other?

If you select the local currency, it will be converted to your card's currency according to the terms of your cardholder agreement (e.g. in the US and Canada it's often Visa/Mastercard's current rate + 2.5%, or possibly less for some fancy cards with annual fees). Some cards may add a per-transaction fixed fee on top of that.

If you select your card's currency, conversion will be done by the merchant bank of the vendor where you're using the card. The advantage is that you see right away how much you're paying in your card's currency - there are no surprises on the bill later on. The disadvantage is that the rate is, as far as I know, usually worse that your own bank's rate (especially if you have a really good credit card).

When making a big purchase, it's worth comparing the rates. For small purchases, find out before your trip whether your card charges any foreign currency per-transaction fixed fees and what the rate markup is (e.g. 2.5%). If there is no fixed fee and the percentage is not too bad, just charge in foreign currency all the time.

The service you are referring to is called "dynamic currency conversion" and is sold as an extra convenience in locales with a heavy tourist presence, not just in airports. Many people are tempted to opt for their home currency because they assume that it will relieve them of inter-bank fees and disadvantageous exchange rates.

Starting with your second question...

And what are the benefits of choosing one over the other?

The benefit of paying in local currency is obvious: i.e., you know what the transaction involves. Generally it is picked up by the card issuer and passed through with predictable rates and fees that are governed by the regulator in your home country. So while the end-user faces uncertainty in knowing the precise exchange rate that will appear on their bill, they have the certainty of knowing that it will be set within a regulatory framework and hence 'near the market'.

When you opt to pay in your own currency abroad the exchange rate is established right then by whichever bank is servicing the retailer, and you have no control over it. This can lead to an uncomfortable difference in what you have actually paid.

The regulators in Europe require those offering 'dynamic currency conversion' to exhibit the exchange rate prior to the customer's approving the purchase.

Dynamic currency conversion is legal in the UK and across Europe, as long as traders display not just the price but also the exchange rate being used before the payment is made.

BUT, they do not regulate how the exchange rate is presented to the customer, and therein lies a problem. What may be presented is the inverse rate of the bank's counterparty's bid and this is a rate applicable to the currency wholesale markets and not available to an ordinary mortal. So in order to evaluate it, the customer has to take the inverse of the rate and then compare it to the relative savings they could achieve by using an ATM. People are not generally willing to go through that kind of hassle.

Why are there two options?

Merchants love it because they receive a commission from the DCC provider.

Merchants that operate a global presence, like Costco for example, will avoid offering the service because it interferes with their internal hedging strategies. Amazon, on the other hand, will offer DCC to customers whose credit cards are denominated in multiple currencies; my observation is that Amazon likes to display a bid-side retail rate derived from yesterday's rate (fair enough for most purposes). 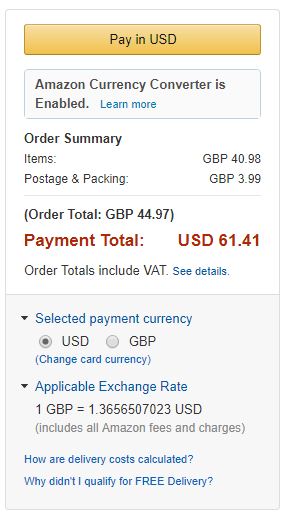 This shows a live screen grab from Amazon's DCC. The exchange rate works out to 500 pips over the prior day's mid-market rate. You can't purchase in this quantity (it's too low) from a retail bank for a rate that attractive, so in this case DCC makes sense. Caveat emptor and your mileage may vary.

Extended discussion on the advantages and disadvantages in the DCC Wiki Article.

It is always most beneficial to use the local amount and not the converted-on-spot amount.

I get asked this a lot as I work in electronic banking.

There are a few things that determine how you are charged:

The bottom line is that all reconciliation between banks and the card networks (called schemes) happens in major trading currencies; usually it is the USD, but sometimes in Euros. There is an interbank rate which is updated twice in a business day.

So all transactions have to be charged and billed in this major currency. Lets say, its the USD.

So if your card is issued in INR, and its a credit card and you choose the local currency at the point-of-sale device then:

If your card is issued in INR, and you chose INR at the point-of-sale:

If your card is issued in a major currency, like the USD - then you are spared a few rates.

Some banks want an extra fee if you pay in a foreign currency, and the exchange rate can be worse than the official one.
So, paying in your currency is cheaper.

On the other side, the shop or ATM may charge you, too if you pay in your currency.

For example, getting money from a Swiss ATM in SFR is free of charge with my credit card, but definitely not with my debit card. Charging the card in EUR on the same ATM would be free for both cards, while the ATM itself would take a fee for this. That fee is cheaper than the fee for by debit card, but using the credit card is for free.

Usually (depending on your card) your bank offers a better exchange rate than the merchant, so choosing the merchant's currency is cheaper than choosing your card's currency.

Not the answer you're looking for? Browse other questions tagged money exchange shopping or ask your own question.

33
Paying by credit card while overseas cheaper in US dollars or in the local currency?
3
Where to exchange Euros(EUR) to Pounds(GBP) near Frankfurt or in Edinburgh
10
Alternatives to credit cards for paying abroad
10
How can I avoid unfavorable currency exchange rates when paying with my card abroad?
2
Handling cash conversions for a short trip to Israel, Jordan and Egypt from India