What is a continental breakfast and what other types of breakfasts are there?

When I look for an hotel I often see the "continental breakfast" expression when they refer to their breakfasts.

I looked up the expression on Google and found:

a light breakfast, typically consisting of coffee and bread rolls with butter and jam.

This contradicts my experience as I often find a lot more than that. There are often croissants, boiled eggs, scrambled eggs, juice, sausage, tomato, baked beans, etc. 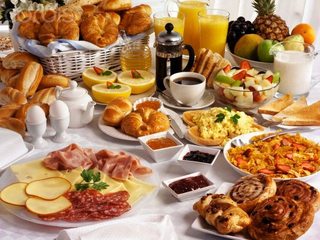 What is and what can I expect from a continental breakfast? Does the industry have a different concept? And what other kinds of breakfasts are there?

Great Britain vs the Continent

Whenever something is referred to as "continental", you can be sure it's meant as the opposite of "British". The popular myth of the newspaper headline reading "Fog Blankets the Channel; Continent Cut Off" is another example of the attitude that spawned this dichotomy.

In this case, a continental breakfast is the opposite of a full English breakfast and that is where the term originated.

On the British Isles, a full breakfast (called a full English breakfast, full Scottish breakfast, full Welsh breakfast, or full Irish breakfast depending on the country; I'll use English in my answer since that's the most common term), is a warm — mostly fried — breakfast. Its exact constituents vary, but it usually consists of scrambled eggs, sausages and bacon, baked beans, fried tomatoes, and fried potatoes, sometimes with black and white pudding, or with fried up leftover vegetables from last night. It's quite a heavy meal.

In the rest of Europe, breakfast is usually mainly bread with cheese, slices of meat, or sweet or savoury spreads. Breakfast cereals, sometimes. The only ingredients that are usually eaten warm are eggs or porridge. It is a bit lighter meal than an English breakfast

Hot beverages such as coffee or tea are common to both.

The main difference between a continental breakfast and a full (English) breakfast is cold vs. hot.

A continental breakfast can be served cold, eggs having been boiled beforehand. The only hot ingredients might be the beverages — coffee, tea, hot chocolate. This reduces cost for the hotel and allows for the breakfast to be served in just about any room; it's not unusual to see the hotel bar being used for this if the hotel serves only a continental breakfast.
The hotel doesn't need any cooks to be present, just waiting staff to serve it.

If a hotel serves both a continental breakfast and a full English breakfast, the latter may be offered at a premium, since the costs to the hotel are higher as well.

If you've had a continental breakfast that included scrambled eggs and other hot dishes, it most likely was a breakfast buffet, where the hotel offers something extra to its guests, ending up a bit in the direction of a full English.

Continental tends to refer to a cold breakfast, as opposed to a cooked breakfast. Usually it is breads, cereals, drinks, but each hotel will dress it up as they please.

Full or Cooked breakfast (often named locally ie Japanese breakfast, etc) tend to be whatever is commonly cooked for breakfast in the country the hotel is located in.

Buffets, well most folks know what a buffet is ....

But as mentioned in my continental description, each hotel can and will dress up their meal offering as they see fit for all of the above "categories". Plus different cultural expectations will contribute to the final menu.

Here are some breakfasts I have encountered. Of course, each hotel adds and removes items as they wish.

Edited according to some comments (especially the ones about the boiled tomato - I now realize how mistaken I was).

I have only had two kinds of breakfasts in the hotels that I have visited, the continental breakfast, which across all the properties I have visited is:

The variety of each may vary depending on the type of location you are in and the locality. For example in some areas, a continental breakfast includes an egg dish of some sort (boiled, omelette, fried to order, etc.)

The other type is the "breakfast buffet" which includes:

Depending on the restaurant chosen and the hotel locality, you may see different items or areas for specific dietary needs. At one hotel I saw a specific area for vegan items for breakfast.

At a hotel in Islamabad (capital of Pakistan) I had in addition to the omelette station, a paratha station (its a hot leavened fried bread with butter) which is traditional to South Asia; and sweet meats.

While reading other answers here, I am discovering new types of breakfasts. Never realized there are so many differences between UK counties and regions. Most hotels specify the type of breakfast they offer either to establish value or to cater a certain clientele. The point is that the name of the breakfast is not the menu, but an indication of the types of things offered.

The ones I know of are:

Half of these were covered by previous answers already but other regions do have their own and the closer you get to the region the more specific things get. In Asia, hotels often offer a buffet with each type getting its own section. So while you are eating breakfast in Asia, hotels catering to international travelers can still offer a section of American and another for Continental breakfast, plus one for local type of breakfast.

Note that I do not consider buffet to be a type of breakfast. Most breakfasts listed above can be served or offered as buffet or even a hybrid. In South America for example, many hotels offer a buffet of bread and fruits but will serve one or two, made-to-order, eggs. In Taiwan, I was often given a set breakfast plus access to a table with additional rice and congee but nothing else.

In Brazil, breakfasts were different than in the rest of South America. I don't know if it is called Brazilian breakfast but it consists mostly of large amount of fruits, eggs, tapioca, bread accompanied by coffee and juice.

I add to the list of Ugoren, as he already wrote obviously every business change items.

Colazione / Italian breakfast: coffee or cappuccino, tea available, biscuits and pastries, bread - butter - jam. To my experience nowadays in hotels and pensions there is always at least one juice, eggs (although in small properties you can only boil them, or they are served 3' and 8'), cheese, ham and salami, cereals and muesli, yoghurt, fruits. It was the reason I THOUGHT this to be a continental breakfast, because is not what we italians have in everyday life. Also, I can imagine that a very small and cheap property might serve an Italian breakfast similar to that italians do everyday at the bars (intended as business itself) and therefore be limited to coffee, caffelatte or cappuccino for the drink, pastries.

Europe in general: Experience tells me that in most of Europe the hotel breakfast is like the extended one I mentioned just the very lines above. Obviously the precise items may vary according to the country: cheeses, salumeria, bread are different everywhere, and so can be even with a single country, e.g. Italy.

Frühstück (Austria), similar to the above in structure, very different in details. Cheese and wurst dominated (there can be three sorts of both) over the sweets, that are limited to jam and bread rolls. Huge choice of breads. Egg can be as you like, either there is a cook or you do it. Again cereals, muesli, yoghurt. Typical in the broad choice of meat and leaver spreads.

Reading again the question I found that I and the OP have the same impression. It seems that a continental breakfast is rarely served, or the definition he found is wrong. See also my comment.

The two basic kinds of breakfasts are "continental," and "country." That is, "continental" refers to the European continent, while "country" refers to individual countries.

A "continental" breakfast is distinguished from a "country" breakfast by the lack of cooking. It consists mainly of "cold" items such as "breads": rolls, croissants, danish, etc. plus cold drinks such as juice or milk. Tea and coffee are the only "hot" items served because the waitstaff can serve this (and "cold" items) without the help of a chef. One variation of "continental" is "South American," which includes cold local fruits such as papayas, mangoes and guavas. Some European continental settings feature cold "northern" fruits such as honeydew and cantalope.

A "country" breakfast features hot food, requires a chef, and varies by country. An "American" breakfast might feature fried eggs, bacon, ham or sausage, and potatoes or hot cereal. An "English" breakfast will have eggs,meat and potatoes, like an American breakfast, and also include beans and other typically English vegetables. an "Asian" breakfast might substitute fish for meat and use Asian-style vegetables (all cooked).

Not the answer you're looking for? Browse other questions tagged food-and-drink hotels terminology or ask your own question.

14
What is usually an American breakfast outside of the US?

19
Are there hotels where children are not allowed?
7
Are there any cafes serving breakfast in Bakewell / Peak District that are open around 8 AM on Sundays?
14
What is usually an American breakfast outside of the US?
30
What are mini-bar policies for one-night stays in hotels?
1
What are 'LMU' and certificates?
9
What are the differences between terminals and gates?
26
Are there other tram bistros like the cancelled U76 in Düsseldorf?