How can I discern if a bottled drink is carbonated or not in Germany?

So I can't discern carbonated drink from the base of the bottle. How can I discern it then? 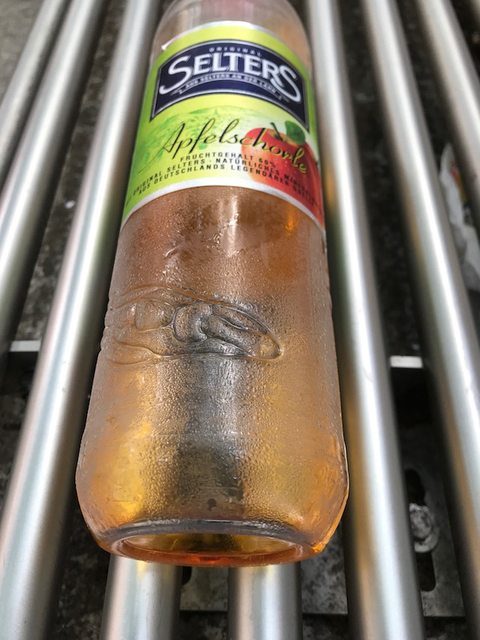 First, carbonated is the standard in Germany, and that's what most people expect, so it would be the default assumption for something you see in the shelves.

Of course, it is written on the drink, but you need to be able to understand enough German to read it. 'Still' is the typical term used in German for non-carbonated water-realted; if you see that, it will be non-carbonated. 'Kohlensäure' means carbon dioxide, and if you see it, it is carbonated; typically in connection with the verb 'versetzt', which means that the carbon dioxide was injected in the water.

There is no mechanical key or form factor that signifies it; many companies have carbonated and non-carbonated offers in the same bottles, with the same colors, with only different wording on the label.

Look for the word "Kohlensäure", it's either on the front or in the list of ingredients:

Just make sure it's not accompanied by "ohne" ("without"):

In addition to points already mentioned, there is another indicator for plastic bottles: Try to press and see how easily you are able to dent them. The air in bottles of carbonated drinks is under pressure. When you compare different plastic bottles of the same form factor, you will notice that you can tell by pressing them:

However, this is a method I learned as a kid and which I have rarely used since then. Probably all the limitations noted in the comments below are valid.

There is absolutely no way that I know (native German) to tell without reading the label. Bottles, colors of caps or whatever, I have never noticed any pattern that discerns carbonated from not carbonated drinks.

non-exhaustive list of indicators that you have a carbonated drink:

There is also "medium" used on mineral water to indicate that it is a little bit carbonated (i.e. less than normal mineral water).

(1) where I come from (northern Germany), "Schorle" always means carbonated. As comments on other answers indicate, in other parts of Germany it might not always mean that. On bottles, however, I have not once anywhere in Germany bought something called "Apfelschorle" and found it to be not carbonated.

(2) this is rarely written, mostly used when ordering in a restaurant, i.e. "Wasser mit Sprudel, bitte" - "carbonated water, please" - or you could be asked "mit oder ohne Sprudel?" - "with or without carbonation?"

The name of the drink often shows if it is carbonated. The drink on the image is named "Apfelschorle". "Schorle" is carbonated juice. "Apfelsaft" on the other hand is natural apple juice (juice is "Saft" in German) without carbon dioxid. For water Aganju said the important thing: Normally bottled water is carbonated in Germany. If not it is usually labeled with "Still". If it is carbonated you often find terms like "Kohlensäure" or "Medium".

Just a word of warning: if you really cannot abide carbon dioxide, "Still" is not even a guarantee for mineral water to be without carbon dioxide addition. It's just less than in "Medium". Turn the bottle on its head and look for bubbles. "Naturell" or similar are safer in that respect. Heavy glass in the "standard" deposit 0.75l bottle form is usually suspicious but it's not like plastic bottles cannot contain heavily carbonated water either.

If you order "water" without any qualifier, you'll get carbonated in a restaurant.

"Sprudel" or "sprudelnd" are the German words for "fizz" and "fizzy" respectively, so these too are worth watching out for (as well as the "Kohlensaeure" already mentioned).

Not the answer you're looking for? Browse other questions tagged germany food-and-drink tips-and-tricks shopping german-language or ask your own question.

12
Is the tapwater safe to drink in Albania generally and Shkodër specifically?
9
Tipping for free drinks in the USA?
8
Availability of alcohol in Morocco?
5
Can I bring a growler of beer in my checked bag?
6
How can a person living in the tropics be better prepared to travel to snowy areas?
71
How can I avoid ordering multiple bottles of water at a restaurant?
111
Why is the price on the shelves for drinks often different from what I actually pay in supermarkets in Germany?
11
Can only eating processed food and bottled water reduce your immunity?
4
Is properly sealed bottled water ever unsafe, even in developing countries?