What kind of behaviours must we avoid while staying in Singapore?

This is my first month in Singapore to start working here. I have heard that this country is very strict with their citizens and even tourists to keep the country clean and proud. Are there any behaviors which we need to avoid while staying in Singapore?

I lived in Singapore for ~7 years, so I suppose I'm pretty well placed to answer this question.

TL;DR, don't worry about it: if you behave respectfully/normally by Western standards in Singapore, you'll be totally fine. If anything, Singaporean culture tends towards the brusque, people tends to be pretty straightforward in their interactions compared to (say) Japan. You want beer or not? Cannot lah, drink three bottle already!

You should, however, be aware that law enforcement in Singapore operates on the Chinese principle of "Kill the chicken to scare the monkey" (杀鸡儆猴), meaning enforcement is loose (compared to most SE Asian countries, cops are a rare sight) but punishments are draconian. In particular:

As for the famous chewing gum ban, it's not absolute (medical/dental gums are permitted) and it's not the act of chewing that's banned, but littering with used gums.

This question is indeed very broad. But I can understand where it comes from. I have lived in Singapore for the last couple years and often do I get this kind of questions, given the reputation that the country has in the West. Just to get something out of the way: You won't get into any problems for eating chewing gum. It is not commonly sold in Singapore, but bringing it in in small quantities and eating it in public is not a problem.

You seem to be mostly concerned about things which are illegal and not things which are disrespectful. I would say, that as long as you act normally, without trying to do funny or obviously illegal acts, you will be fine most of the times. If there is something which you are not supposed to do, you'll very likely find a big sign indicating this: 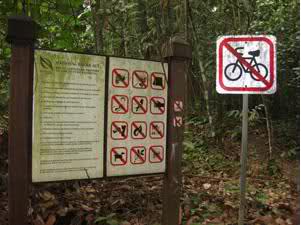 For a good overview, you might want to refer to this wikivoyage page. Some general (besides the very obvious) things which you should not do are:

This is mostly about laws. When it comes to etiquette and respect, there are of course a lot of other rules and conventions. Again, there's a summary of that on wikivoyage. In general, as a foreigner, you will get some leeway there though and it is okay if you don't know all of those at first.

Not the answer you're looking for? Browse other questions tagged legal singapore etiquette cultural-awareness or ask your own question.

19
Is it really permitted for travellers to work while visiting Georgia on a tourist visa?
28
Does being refused entry to Singapore mean I am now blacklisted?
3
Re-Entering Singapore on a tourist visa
9
Is it a problem to go through immigration 3 times in 2 weeks, for really short periods?
7
Goods allowance while travelling to singapore?
21
Is there a program for Malaysia-Singapore commuters to avoid passport stamps (so the passport doesn't get full)?
5
Where can I smoke in Shanghai after the new smoking ban started in March 2017?
3
On attempting reentry with tourist pass after being rejected