How to find a place in Famagusta?

I'm looking for a former British Base named Base 55 in Famagusta, North Cyprus. What is it today:- UN Base? Public place?

On the island of Cyprus, the British Overseas Territory includes two base areas: Akrotiri, to the west not far from Limassol, and Dhekelia, in the east and proximate to Famagusta.

The British Sovereign Base Area (SBA) of Dhekelia lies at the edge of what is now the Buffer Zone, created by the 1974 division of Cyprus, and still an active military area. Fort Bravo is a redundant military facility within the Zone, also referred to as the Green Line.

Fort Bravo was a British Army camp whose purpose was to preserve the integrity of the Eastern SBA (at Dhekelia) against any force and prevent any internal security situation developing. The base also protected the Athna Forest Refugee Camp. 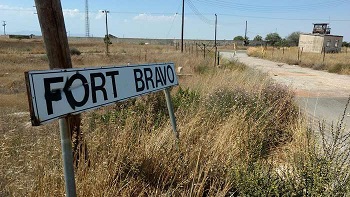 The Fort Bravo perimeter has fencing and prohibitive barbed wires, but there are disused watchtowers from which you can view the area. As seen from Brooke's photographs, you're able to approach the Fort and the map shows the Zone as it bisects the British military base.

The Buffer Zone is administered by the United Nations Peacekeeping Force in Cyprus (UNFICYP).

In the eastern part of the island, the Buffer Zone is interrupted by the British Sovereign Base Area of Dhekelia, where the UN does not operate. Another area the UN does not control is Varosha, the former resort town near Famagusta, now under the control of the Turkish military.

Not the answer you're looking for? Browse other questions tagged history northern-cyprus or ask your own question.

14
Will staying in Northern Cyprus cause problems for later travel in the EU?
14
Is the border between Cyprus and North Cyprus an issue for a casual tourist?
5
Public baths in Montreal
9
Changes to Cyprus timezones
6
Are North Cypriot land border crossings equipped with passport stamps?
11
Which car rental companies in Northern Cyprus permit you to drive to the Republic?
5
What accurate offline GPS apps are there for the whole island of Cyprus?