I just came across platform zero at JR Kyoto station. Are there places with more exotic station numbers, such as negative numbers, fractions or complex numbers? I'm interested in places that have such numbers as a joke, and places that have it for a serious reason.

In Amsterdam Centraal platforms are quite long, thus allowing two different trains to stop at each end of the platform. On which end of the train stops is denoted by a letter, either "a" or "b" after the number of the track. This causes huge confusion among travelers. In more than one occasion I have seen people who wanted to go to Schiphol (the airport) on the train to Lelystad (the opposite direction).

Also what's quite unusual, there are 3 tracks between each pair of platforms, with the middle track (inaccessible to passengers) is also numbered.

It's not a real platform, but King's Cross station in London has a faux Platform 9¾ (9 and 3/4), in reference to the platform in the Harry Potter novels. It has a luggage trolley half embedded in the wall, to allow people to take photographs with it. 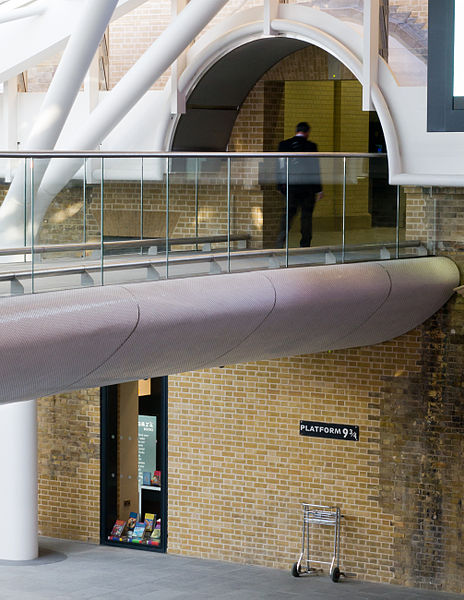 Not really unusual but different:

In France most stations number their platforms starting at 1. But some stations have chosen to use letters instead, or mix both. This includes the Lyon station, one of Paris' busiest train terminals. The concourse is divided in two parts; one has the numbers while the other has the letters.

This is reflected in the passenger waiting process: in SNCF stations, the track number is shown 20 minutes before departure, in order to avoid passengers rushing to the platform sooner as the train is still being prepared, or another arriving train is releasing its passengers on the other side of the same platform. Before the track number appears, the concourse in which to wait is mentioned, like "Hall 1" (numbers) or "Hall 2" (letters).

Another quirk in the same area is that, a few hundred meters apart, there is another, smaller terminal, the Bercy station. It is mainly used for regional trains, sleepers trains to Italy, some chartered trains and motorail services. It has a few tracks only (let's say about 6, I do not remember the exact count), which are lettered in alphabetic order starting where the Lyon station's lettering has stopped.

For instance, the last letter used at Lyon station is N. At Bercy station, there is a track lettered R and no A.

In Dordrecht (the Netherlands), they've added tracks without renumbering the existing tracks. In particular, they've added them "before" track 1, so they logically would have to be 0 and -1. But to make it confusing, they're numbered 15, 16 and 20 (where 15 and 20 are east and west of the station building).

Not the answer you're looking for? Browse other questions tagged transportation factoids or ask your own question.

9
Leaving airport international zone for a moment
18
Are there any common, lesser-known services offered by airlines to passengers onboard?

10
What unusual means of public/share transportation exist around the world?
21
Are there any women-only places in the world?
16
Most radioactive places on earth
23
What is the purpose of numbers on some UK street name signs?
50
Who was this persistent person at Shanghai airport?
82
Why is the departures level always above the arrivals level?
2
Global taxi service with child seats
7
Most remote passenger train station
12
Which railway stations in the UK only offer travel in one direction?