Why do Prague streets use double street addresses?

I'm traveling to Prague and I noticed that every street has double addresses, one red and another blue. What's the story behind that? 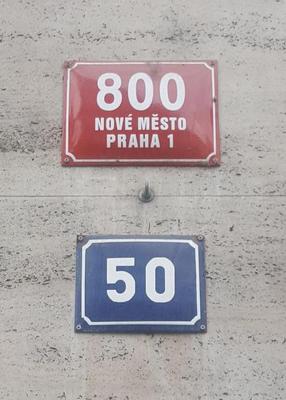 The upper number is the "descriptive number" (Czech: číslo popisné or č. p.) and is unique within each municipal part (in this case, Nové Město, Praha 1).

Since descriptive numbers can be fairly large and since they're generally assigned based on age (i.e. newer houses have higher numbers), they're hard to use for navigation, which is where the second number comes in.

The lower number is the "orientational number" (Czech: číslo orientační or č. o.). It's unique for each street or square (in this case, Wenceslas Square) and can be used for navigation, since houses in a row should have increasing numbers based on their position in the street/square. Also, for streets, houses on one side of the street have even orientational number, and odd on the other side.

The same system is used in other towns and cities in Czechia. The plaques can have different colors, but their position (the orientational number below the descriptive number) should be consistent.

Not the answer you're looking for? Browse other questions tagged czech-republic or ask your own question.

34
What do the additional numbers on the side of houses in Rome stand for?

14
Paying with Euro in Czech Republic
11
What's the cheapest public transport from Nürnberg to Prague?
4
Can you rely on local tourist information centres to find accommodation in the summer in the Czech republic?
2
Travel within EU Schengen area with lost residence permit card abroad
1
Where can I find Taizé groups in Prague?
5
Uber from the airport in Prague - pickup location and reliability?
9
How to get to the Golden Lane (Zlatá ulička) in Prague?