Cheap travel to Toronto from California

I'm coming from Sacramento/San Francisco and I'd like to travel to Toronto, and then back a week later.

Why is Toronto so much more expensive?

Any suggestions on how I might fly to somewhere NEAR Toronto for much less $ and then cross the border by other means? This is my first time travelling internationally so I have no idea.

As has been extensively reported elsewhere, Canadian taxes and fees are considerably higher for air travel than American taxes and fees. On the one hand, the U.S. subsidizes its airports (for example, supplying TSA agents and FAA air traffic controllers) allowing them to charge lower rents and passenger facility charges than their Canadian counterparts; additionally, Canadian excise taxes, like most Canadian taxes in general, are higher than their U.S. equivalents. Air Canada being Canada's only major international carrier may also bear some blame.

When in Canada, do as the Canadians do: take ground transportation across the border and fly from a U.S. airport. Such is the business in tiny Plattsburgh (pop. 20,000) that PBG bills itself as "Montreal's U.S. airport" and has a French website, and by some reports 75% of the passengers through PBG are Canadian. Allegiant Air even began service from Grand Forks, North Dakota to capitalize on the willingness of Canadians to drive in from as far as Winnipeg to save a few hundred dollars going to Florida.

Megabus, as noted previously, has direct service from Toronto to the Buffalo airport, although it is not the speediest. You can also take Greyhound to the Buffalo terminal, then take city bus 204 to the airport. There are also a variety of premium shuttle and limousine services between Toronto and Buffalo, although these are quite expensive unless you have a group of 5 or 6.

As @KateGregory mentioned you could fly to Buffalo for around 400 USD (roundtrip price, 7 nights). The cheapest prices you will find in the first day of October at the moment: 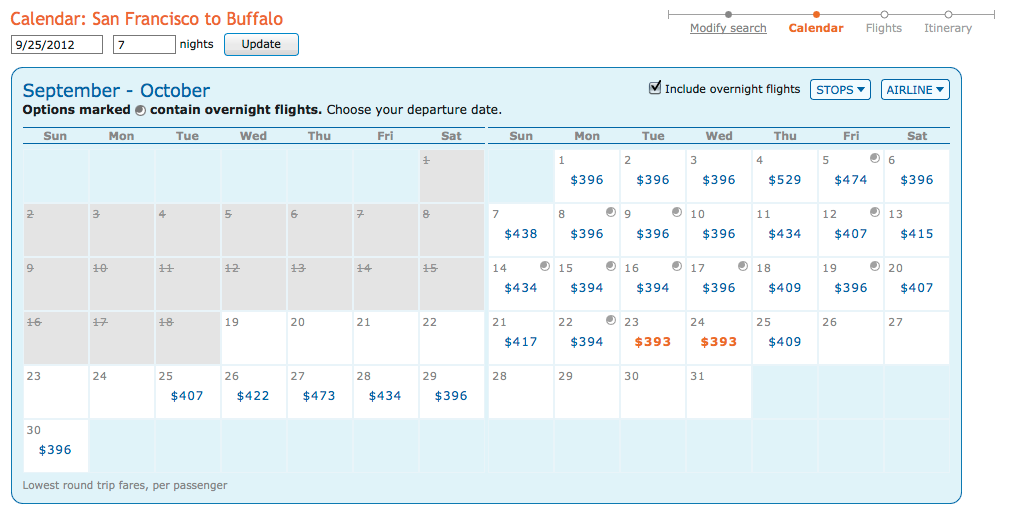 To get from Buffalo to Toronto you can use Megabus. I did the same journey 3 weeks ago and it is quite convenient and it costs at the moment only 12.50 CAD (one-way price). It will take between 3 and 4 hours.

Not the answer you're looking for? Browse other questions tagged budget international-travel toronto california or ask your own question.

8
Cheap but comfortable way to get from Kingston, ON, Canada to Toronto?
9
Why are USA to Europe round-trip airfares more expensive than Europe to USA round-trip airfares?
4
Traveling along the West Coast of the USA along U.S. 101 using public transportation
0
Cheap last minute flight from Toronto to Ottawa?
0
Cheapest way to get to Westminster from Downtown LA?
2
US Citizen flying to a country, but via another country as a stop en ruote: do we need extra time?
2
Staying in Sunnyvale, visiting San Francisco 1 day. Which transport pass?