From Israel to Jordan

If I want to go from Israel to Jordan for a short trip just to have a quick look, and back to Israel, would I need a visa for Jordan too?

this site in Italian tells me that I can apply for a visa at the border. 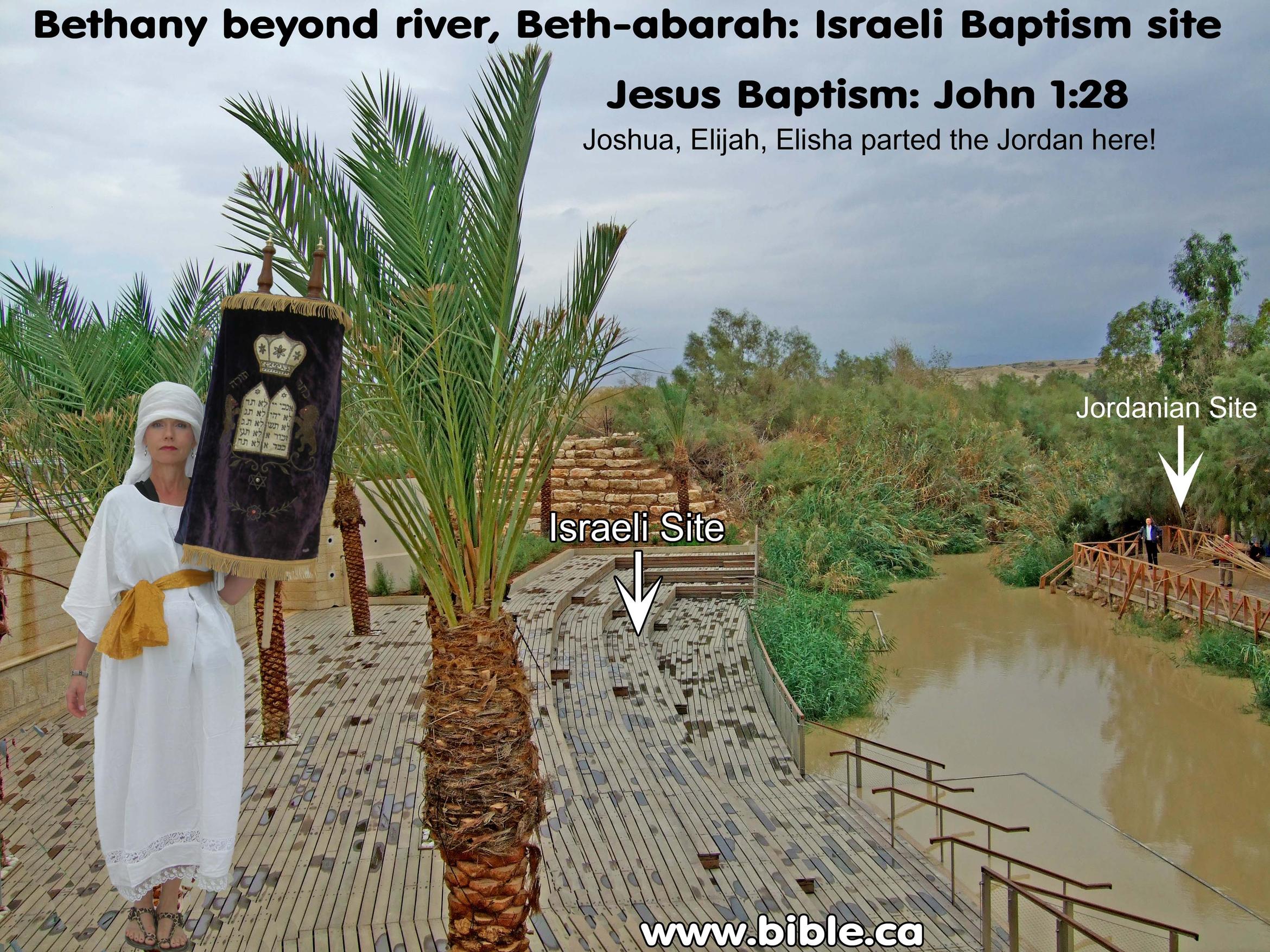 this site tells me this:

Visas You’ll need a visa to enter Jordan. You can get a single entry visa valid for 1 month on arrival at the airports or the Sheikh Hussein/North Border crossing at the Jordan/Israel border.

Entry visas aren’t issued at the Wadi Araba/South Border crossing (Aqaba/Eilat) or the Allenby/King Hussein Bridge (the other crossing on the Jordan/Israel border).

I am an Italian passport holder.

There are two baptismal sites on the Jordan river, Yardenit and Qasr el Yahud, the former is located fully in Israeli territory and both banks of the river are Israeli. The later, Qasr el Yahud, is the place where, according to Christian tradition, John the Baptist performed the Baptism of Jesus and where, according to Jewish tradition, the Israelites crossed the Jordan River, and the Prophet Elijah ascended to heaven. This is also where the picture in the question was taken at.

The Israeli side of Qasr el Yahud is open to the public since 2011, and the Jordanian side has been open for a lot longer. While it's physically possible to walk from one bank of the river to the other, due to the river being shallow (~1 meter) and narrow (~5 meters) with slow water flow, at the place, the International border between Israel and Jordan passes in the river itself, so it's not allowed and border guards are located on both banks to make sure that it doesn't happen. Do not, under any circumstances try to get across the river there.

If you want to get to the other side, you need to go through a border crossing, the closest one is the Allenby Crossing / King Hussein Bridge. It isn't open to Israeli or Jordanian citizens, only to tourists, West Bank Palestinians and Eastern Jerusalem residents. You can't get a Jordanian Visa in the Allenby Crossing and need to have it in advance:

Can I get a Visa for Jordan at the Allenby Border Crossing into Jordan?

Please note that you are NOT able to get a visa to Jordan at King Hussein/ Allenby Bridge. You must have a visa in advance to enter Jordan at King Hussein/ Allenby Bridge. You may apply for a visa in your home country, at the Jordanian Embassy in Tel Aviv or the Jordanian Representative Office in Ramallah. However, if you have already entered Jordan and got a visa, [your] visa may still be valid to re-enter

Take notice that the Qasr el Yahud site is located on a border area that is still heavily mined, if you come alone, without a guide, make sure to not go across any fences (they are there to fence minefields) or stray off the road, this includes the abandoned churches at the place which are located inside minefields The site is maintained by the Israeli Nature and Parks Authority and has their representatives on site, if you have any questions you'll be able to ask them.

Update: The Israeli ministry of defence has annunced recently (early December 2018) that the mines have been cleared from 3 of the seven monasteries on the site (Greek-Orthodox, Ethiopian and Franciscan) and that in the coming months control of them will be passed to the respective churches and they will be opened to the public.

The rules somewhat differ between the 3 border crossings:

Visa to Jordan – issued at the Jordanian terminal and costs 14 dinars.

Crossing the border at the terminal requires a valid passport with an expiration date at least six months after the departure date and all required documents for exiting:
Entry visa to Jordan clearly stating that the crossing is through the Allenby Border Terminal.

Visa to Jordan:
Jordan requires a visa – for further information, please contact the Jordanian Embassy in Israel at 03-7517722.

So the easiest option is the Jordan River crossing.

How to get to Petra from Israel (Jerusalem, Tel Aviv & Eilat)

Note that visas must be arranged in advance and cannot be obtained at the border. Private cars and tour buses cannot cross – travelers must change vehicles upon crossing or use the other two border crossings.

We’d seriously recommend heading to the Jordanian Embassy in Tel Aviv to sort yourself out a tourist visa (ensure you have a passport sized pic). Once you have the visa, head to Allenby/King Hussein Bridge which is close to Jerusalem (about an hour away). You could always stop by in the Holy City to see some of Jerusalem’s attractions before heading to Jordan.

Ezra said in the comments:

If you are a citizen of Israel or Jewish it might get a little complicated. Just a warning. Once when on a trip to Israel, a man from the tour bus wanted to step over the Egyptian border and place both feet in either territories so he could say he'd stepped into Egypt, and even with a passport the guards wouldn't let him.

Not the answer you're looking for? Browse other questions tagged visas israel jordan italian-citizens or ask your own question.

17
How do I visit Petra from Israel?
15
Iran visa after having visited Israel
6
Are taxis available on the Israel side of the northern crossing to Jordan?
3
One way trip from Tel Aviv to Petra and more in Jordan?
9
If I visit countries neighbouring Israel, may some countries deny my entry?
3
Jordan double border crossing?
1
Visa requirements for leaving Israel, going to Jordan, returning to Israel again
5
Saudi Arabia business visa with Wadi Araba border crossing stamp?
7
Travel to Jordan, cross Israeli border and fly back from Tel Aviv
0
Discount on Petra Entrance Fees or Jordan Visa Fees if I spend 2 nights in Jordan