What is the meaning of the NDK "underground" fountain in Sofia?

In Sofia, in front of the NDK, there are two fountains. One of them is underground, at the metro level: 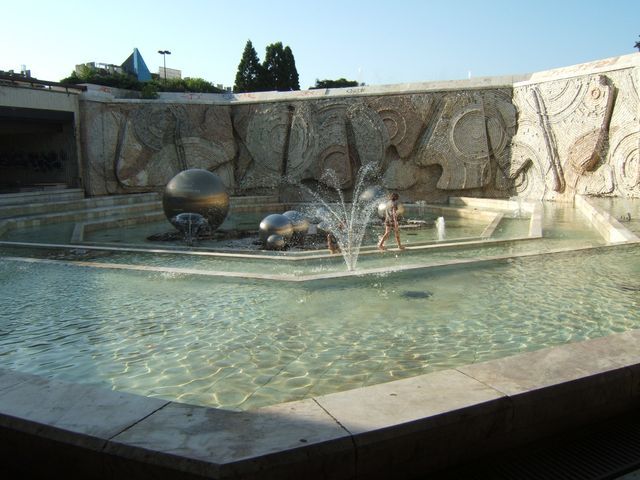 Now, I'm not saying that every single fountain in the world is expected to have a deeper meaning, but is one has been obviously designed with something in mind and it's nearly the weirder fountain I've seen in my traveling.

I tried asking to local residents, but surprisingly it seems that nobody ever thought about it. And funnily enough, while it seems (at least, that's what I've been told) I'm currently living in the house where the architect which could have designed it lived, the current owner of the house has no idea about the fountain too.

I obviously tried some Internet search, too, but came to nothing. So, can someone shed some light on this? What is the meaning, if any, of this humid piece of art?

If there is any ulterior significance to an below-grade fountain, it is long buried, along with the individuals who were involved in the project, from its very concept to a long-overdue realization. It may have been the site itself, cratered by bombs, littered with a haphazard collection of buildings including military barracks and a train station and coal yard, along with a huge swath of barren land.

It may have been the evolution of the concept to build a large-scale cultural center; more accurately, for it to be bigger and better, grander and more grandiose than any other. An international design competition collapsed and the project became a collaboration, in both the best and worst senses of the word, between architects, engineers, government ministers and officials, and an assortment of others with varied and various credentials.

The NDK, both interior and exterior, is massive: the structure and its grand views, its promenade and allee, its fountains, both at- and below-grade, the latter both a water feature and a sculpture garden. It's a very Modernist construct (or Brutalist?), and implies that the design is simply that, a well-realized, below-grade sculpture and water feature that engages individuals on multiple levels.

Not the answer you're looking for? Browse other questions tagged factoids bulgaria history sofia or ask your own question.

12
Where is the museum of socialist art in Sofia, Bulgaria?
9
Under which conditions should I buy an extra ticket for my luggage on public transport in Sofia?
5
Parking via SMS in Sofia, Bulgaria
9
Bucharest to Sofia
3
Bus to Bansko from Sofia
44
What is the meaning of the swastikas at Ny Carlsberg Glyptotek museum in Copenhagen, Denmark?
3
What are the bus options from Sofia to Ruse (Bulgaria)?
14
Train connection from Istanbul to Sofia?
4
How to go to the airport in Sofia after midnight?