In the answers to this question, there is some discussion about use of full beam when driving in deer areas. Thorsten S. writes:

If you are using high beams, wild animals will stop and stare hypnotically into your light and given the high speeds cause severe accidents. There are always some warnings in German travel radio if deer has been sighted on the autobahn.

I had never heard this before. Several commenters disagree, as do some internet sources, such as the humane society page on tips to avoid deer collisions notes:

Use your high beams at night to see farther ahead. Slow down and watch for the eye-shine of deer near road edges. 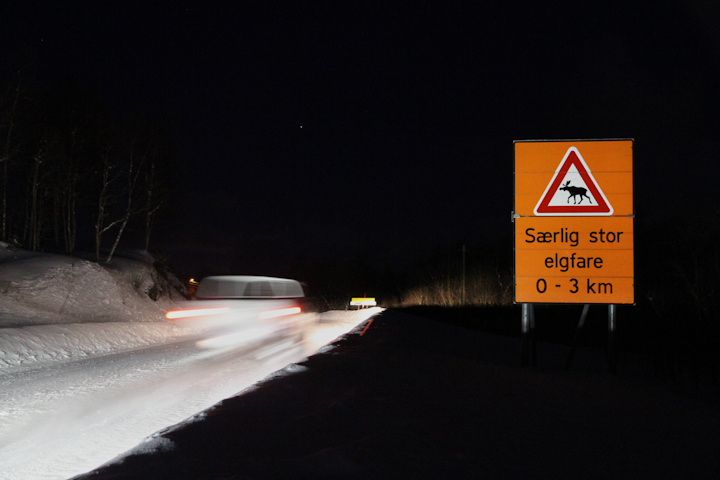 Having gone through German driving school, I remember what I was taught then. It is all reflected in this question that can appear in the theoretical driving test:

How are you supposed to react if deer suddenly appears in the high beam?

This is also the condensed advice that I was able to gather from other German sites on the topic. It is recommended — even in deer areas — to drive with high beams on to increase your view. You should always check the road sides if you can see the reflection caused by the eyes of wildlife. If and only if there are deer on or beside the road, you should lower your beam, brake (reasonably, i.e. only so much that the car behind you won’t kiss your bumper) and honk your horn.

The reason given is that the headlights blind whichever wildlife you are dealing with. They can no longer see where they are or where they are going — and they especially cannot see you and cannot realise you are in a car. By the time their eyes have accustomed to the brightness you have already hit them. However, the lower beam has a chance of not blinding them directly because it is pointing downwards. Therefore, the wildlife can still see enough which means it can see whither it should flee.

The advice Thorsten mentions in the post linked in the question probably refers to cases if the deer is already on the motorway. If it is, you know that you’ll need low beams soon and rather than waiting for the inevitable to occur and wasting reaction time it would be slightly safer to lower your beams immediately (and reduce your speed). When driving normally without any explicit warning, the downsides of reaction time are outweighed by the advantage of seeing the deer better and earlier.

You will see more with High Beam, so it is safer.

However, when you encounter wildlife, you should (aside from breaking!) switch the high beams off immediately.

Reference: State Farm® tips to protect yourself on the road.

No, you should use high beams as you will see further and more.

Is there any empirical evidence that shows which one is safer?

As State Farm and others are recommending using High Beams, the implication is that high beams represent an increased safety factor. While tragic for the deer, unless later consumed, collisions represent a covered loss for the carrier.

In my country, driver schooling focuses on principles of moderate speed, correct safe distance, and maximum visibility. So here is my contribute answer.

If lowering beams hides the animal to your own eyes, keep high beams for a few more meters

Once you are able to track the animal, lower your beams

Do not horn or you will scare the animal more

I have found myself in similar situations, especially with cats. Once I hit one who first stayed still then crossed the street by the exact time my car approached him. First, use as much as high beam as possible. Travel is safer with them. It is better for you to see animals in advance than relying on them to avoid you. Humans are intelligent, expert and aware of dangers. They can elaborate escape routes. Animals rely on instinct.

You have to control your speed not just over the displayed/designated speed limit, but on your knowledge of the road, visibility and ability to brake. Ability to brake includes (picture displays snow) weather conditions and car status.

You will normally hit the speed limit, and travel as fastest as you are allowed, with full high beams on a straight way. By the time you notice reflections from wildlife eyes, you will have all the distance you need to slow down using the brakes without excessive force.

If you are on a curve, thus have reduced visibility, you are required to slow down as your beams will point to animals too late for breaking in safety.

Second part is how to handle the wildlife at short distance once you sighted them and slowed. You have to avoid the moose maneuver and keep it at last resort. Discussion here is whether to keep beams high or to lower them. My answer is: KEEP YOUR ANIMAL VISIBILE at all the time.

Do the above while braking, so I assume you will choose whether to lower beams while your foot is pushing the brake and speed gauge is reducing.

It may happen, on very dark roads/nights, that you may want to approach your animal with full beams at all the time. He will stare, his eyes will be stressed a lot, but you will probably save his life as soon as you slow down and gently turn him. Again, you have planned your speed in advance so you are aware of your braking distance. The vehicle behind you has planned his distance and speed and can react to you braking gently.

To make an idea, keep in mind that humans have 1 second lag to start braking. Assuming a 90km/h out-of-town speed limit, modern cars with ABS can slow down to 40 in 3 seconds in comfort (if you push the brake with your full body it will take less and scare passengers and following vehicles).

Avoid to moose if not forced to do so. Contributors correctly showed that choosing to surely hit wildlife with minor consequences or risking to fail to moose with severe consequences for driver, passengers and oppositebound traffic is a hard choice.

Traffic regulators may want to plan the mandatory installation of devices such as this one in all cars in the near future. Motor companies are already working on self-driving cars that need such kind of sensors.

Not the answer you're looking for? Browse other questions tagged safety driving or ask your own question.

14
Is it legal to turn high beams on when driving on a European highway with fully separated lanes?

15
Are there high crime areas in Japan that I should avoid?
44
Am I supposed to respect traffic signs that are upside down (in the USA)?
6
What areas to avoid in Brussels after the recent terrorism events
29
Within the United States (Pittsburgh), when merging onto a lane, which turn signal do you use?
16
Where to hide your money in high-risk areas?
19
Do safety warnings for avoiding crime in South Africa apply to off-the-beaten-track rural areas, as well as the cities?
7
Do the Canary Islands always have high waves?
4
How do I find out what areas to avoid to minimize an attack like the murders of the hikers Jespersen and Ueland in Morocco?
5
Is it possible to do a u-turn after entering the Ambassador Bridge from the US to avoid leaving the US?