Do airlines care about the expanded size on a soft suitcase?

I consider switching to a soft suitcase. The size should be less than 158cm aggregately which I believe most airlines stipulate as the maximum size for free entrustment, but some soft suitcases, especially expensive ones like Samsonite, can usually be beyond the limit in a few cm or more.

This is especially true in suitcases that have redundant pockets on the front, which is openable without unlocking. They may also have expanders. And since the soft suitcase has more flexibility to pack into, the total size can expand more, depending on your contents. So the aggregated size can sometimes become 163 or even 168 or more, I think.

In these cases, do airlines care about these expanded size? Do they calculate the size of the baggage by the original size or by the actual, packed size?

Sorry if I failed to explain it well. The "original size" is not based on what a manufacture stipulates (which I just found written on the original post, sorry) but based on a straight line on the bag. This line would become a curve after the overloaded contents swell it up, which I meant as a "actual size". If the airline staff measures the baggage based on the edge of the baggage, it would be close to a perfect straight line and is considered an "original size".

Yes. Airlines have size limits that apply to the actual luggage carried by the passenger; airlines do not care what the stated or official or nominal dimensions are. As you say, soft sided luggage can be stuffed to be large, any luggage with external pockets can be stuffed, and stated/official sizes often do not include wheels, straps, handles, etc.

In most cases, airlines do not ever actually measure luggage carried or checked by a passenger. They usually have a rigid (often metal) sizer in the check-in area, at the boarding gate, and sometimes elsewhere. Airlines sometimes do not enforce their size limits. When they are enforcing them, an agent will instruct a passenger to place his or her bags, one at a time, into the sizer. If the bag fits, it's approved. If it has to be shoved in, or won't fit, it's rejected.

The situation varies by airline, by airport, and sometimes by agent. For example, in the U.S., each airline sets their own rules for carry-on bag sizes, but the FAA requires airlines to enforce whatever rules they have set. If an FAA inspector observes an airline not enforcing its rules, the airline can be penalized.

Here's an example of an airline luggage sizer (for United Airlines): 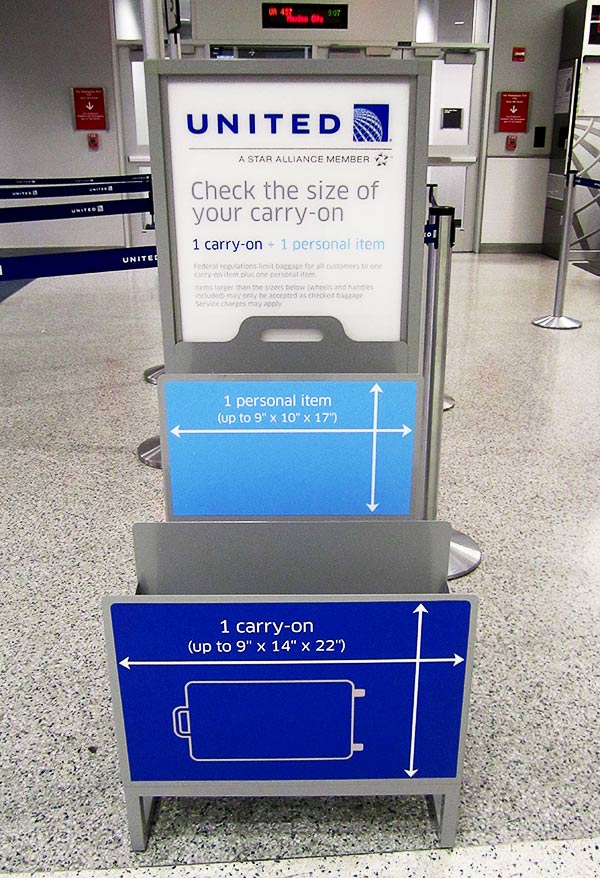 Airlines only care about the volume of your bag: they have a total amount of volume available to store passenger stuff and what matters primary to them is the real, actual volume of your bag. Sides maximum lengths are used "just" to avoid to have to play Tetris with bags and to lose precious available volume 'cause of weird shapes.

So it's not a matter of measuring edges, nominal sizes, and other strange things like that: your bag must fit into a specific maximum volume, defined by a set of maximum sizes technically called a "bounding box".

At check-in, if the officials think your bag is to big, they just measure it against this virtual or physical box: if it fits is ok, otherwise it's not. If the maximum size is i.e. 50cm, and your bag is 48cm with a 10cm side pocket coming out of it, it simply doesn't fit in the bounding box and the bag is not ok.

Not the answer you're looking for? Browse other questions tagged luggage airlines or ask your own question.

4
Confused about the baggage fee for different airlines
1
Personal item size on a United Airlines flight to Asia
5
Travel protection bag OK at airport?
7
Is it safe to knowingly buy an oversized (67-inch) suitcase? Are size limits enforced?
41
Different airlines, same destination, leave about the same time... why?
2
Which US airlines have banned the new 'hoverboards' onboard?
6
Soft-shell spinner suitcase with brakes (and external side pockets)? Does it exist?
5
Have I bought the wrong type of luggage to take in to the cabin of my Emirates flight?
9
Can I take a soft suitcase on Qatar Airways?