Good movie/cinema theaters in Manhattan for sleeping through a movie?

I have an unusual plan for spending a Sunday night in Manhattan -- I'll be busy until 11pm or so, and my flight leaves at 6am from Newark. This means I'll likely have to leave Manhattan by 3am at the latest if I want to get there on time via public transportation.

Rather than spend a lot of money for a night at a hotel/AirBnB for just 2-3 hours of sleep, I was planning to find a movie theater with a near-midnight showing and nice seats, get a ticket for the most boring movie that is showing, put some earplugs and blinders on, and then snooze for a few hours. If I have trouble sleeping, at least I can kill a few hours watching a movie.

I'm not sure how much of this is a travel question -- the intention is certainly travel related, but perhaps this might be better on a different StackExchange (let me know if this is the case). I was hoping some of the Manhattan locals could give me some insight on this matter. In particular, I would like to know:

Alternatively, if someone has a better idea for how I could try to sleep for a few hours in a comfortable and safe environment, that would be good too. A premium movie ticket should run ~$20, and I don't really want to spend more money than that. Perhaps there are cheap and safe hostels but I've always had a negative view of hostels... (EDIT: Also, the sound of someone else snoring really bothers me when I'm trying to sleep. I'd much rather have background movie noise than someone snoring.)

new-york-city sleeping cinema
Share
Improve this question
edited May 25, 2017 at 4:38

As a native New Yorker (albeit far removed in the current era) and a rabidly avid film buff, I was in a theatre almost every time a film entered theatrical release. Hence this is a personal experience answer rather than 'looking-something-up-in-Google' type answer.

I saw people sleeping in NYC theatres all the time: they come in, take a seat near the wall, and fall asleep. This included highly awaited films like 'Indiana Jones', 'Star Wars' (all 6 episodes), 'Saving Private Ryan', and the like. As I mentioned in comments, it never dawned on me that they were killing time. But your proposal sounds fine. Go to midtown and pick any large theatre, preferably the matinee showing. The same would hold for similar districts in metropolitan cities with theatre districts: Leicester Square, Nevsky Prospect, and especially the Largo Mastroianni being prime examples I'm familiar with.

Other ideas include the waiting room like this one in Brooklyn (catch the #2 train at Times Square)... 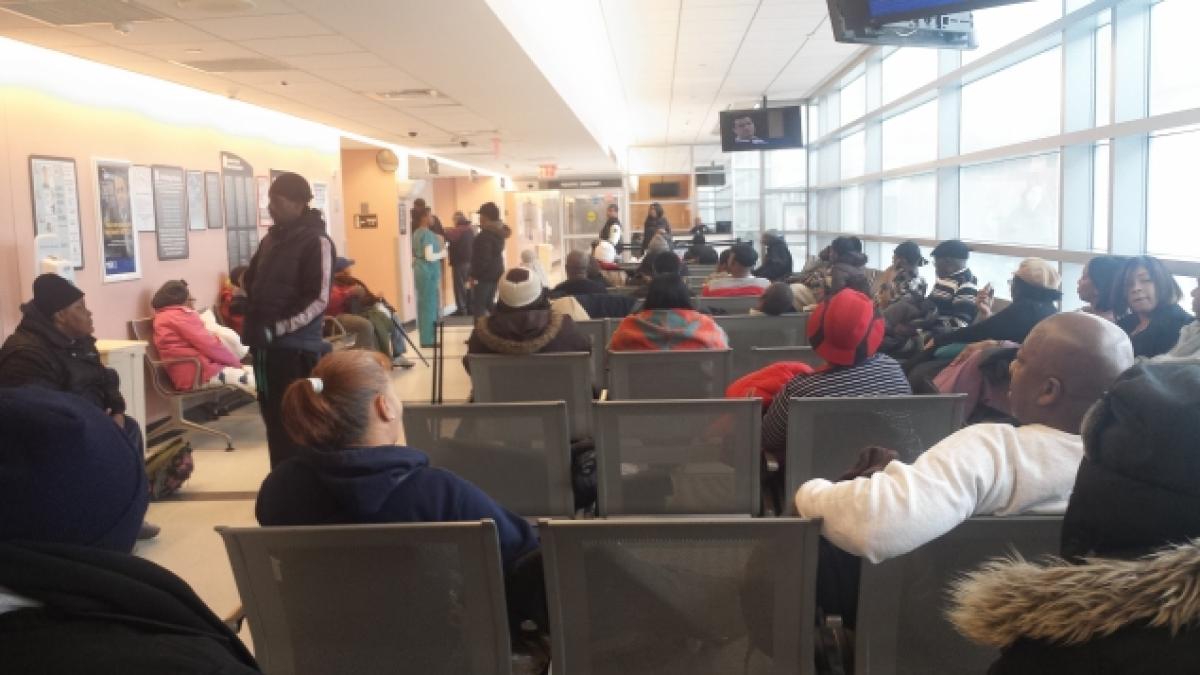 More. There's the strategy of attending mass at Saint Patrick's Cathedral with the intent of sleeping through it. This image suggests there's lots of room... 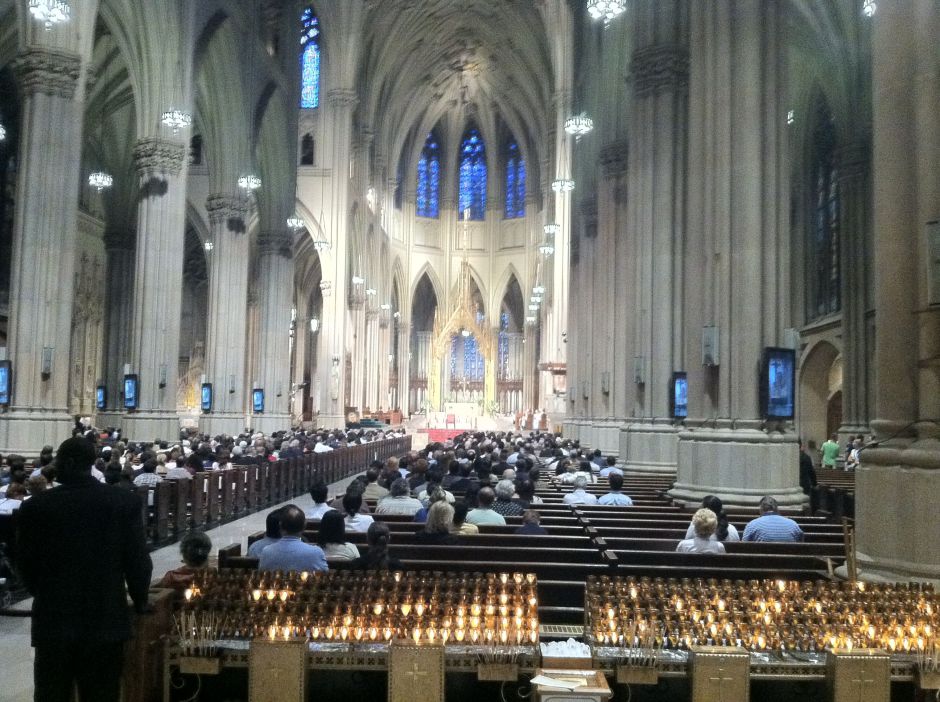 Don't forget bordellos; I learned about this in Amsterdam; you can sleep for 3 - 4 hours during off-peak for the same price as a tryst. I have catnapped for 3 - 4 hours in bordellos in NYC, Paris, Amsterdam, Moscow, Istanbul, you name it. Reasonably priced and somewhat secure as long as you are in a decent neighbourhood. I won't list any here for obvious reasons. If you want to find a bordello to catnap, just ask your taxi driver (any city, any time).

Be sure to read up on any local loitering regulations!

So I went through with the plan and thought I should share some details/things I learned in case anybody wants to go through with something similar.

I ended up going to AMC Village 7 on 3rd av. and 11th st. (It was closer to the WTC PATH station than the 84th st location.) I went to the last possible showing of Baywatch, and took a seat in the back corner. The seats were nice and cushy, and they reclined to a nearly horizontal position. I also used a blindfold and earplugs, and I tied my luggage to myself in a way such that it would be really difficult to rob me without waking me up (it didn't feel like I needed to, but I did it anyway just in case).

-I had a backpack and tote bag full of stuff, and they didn't care about me bringing it in. I'm not sure how they would've reacted to larger luggage though.

-The blindfold worked well, but the earplugs weren't as effective as I thought they would be. Even though the earplugs attenuated the sound, I could still hear every conversation from the movie very clearly. However, the earplugs did do a good job of filtering out all the other background noise (e.g., other moviegoers chatting or rustling in their seats).

-The leather seats seemed nice at first, but it doesn't dissipate body heat well and my neck got somewhat sweaty and uncomfortable. I ended up putting a shirt behind my neck to separate my skin from the leather.

-I didn't end up getting as much sleep as I wanted and I think that was a combination of (1) me not being as tired as I thought I would be, (2) my underestimation of how much the earplugs would do, and (3) Baywatch being a more interesting movie than I thought it would be. Nonetheless, it was a good and safe place to kill a few hours and relax in a comfortable chair.

Overall, I wouldn't mind doing it again but I would try to find a slower/more boring (and possibly longer) movie if possible. Of course, please keep in mind that much of what I have written is opinion-based and will vary from person to person.

Not the answer you're looking for? Browse other questions tagged new-york-city sleeping cinema or ask your own question.

49
What's an easy way of making my luggage unique, so that it's easy to spot on the luggage carousel?

54
What are good security tactics for sleeping in airports?
13
What publicly accessible tall buildings are good for views & photography in Manhattan?
19
How early can you go through airport security for an International flight?
9
Sleeping options for ~9 hour stop over at Abu Dhabi International airport
7
Tips for sleeping in a Couchette sleeping carriage?
5
Hotel near Newark airport (EWR) for early morning use
13
Manhattan subway for the claustrophobic
29
Sleeping options when under 18 and travelling solo
9
Hourly hotels/capsules near Haneda Airport that allow late morning stays?