I am looking for routes where the Air India flies the 787 and 747 since i heard they are being used for domestic routes, i would like to try my luck. I know a few for each, Frankfurt/London gets the 787, Dubai/Jeddah get the 747. I read How to find and compare flights carried out by a specific type of plane?.

Sadly, AI has lost one 747 in the Arabian Sea New Years' Eve crash.

There is a complete timetable of all Air India flights at http://www.airindia.in/time-table.htm, and it has an option to filter by aircraft type (try B787 or B747).

Google also turns up a PDF timetable with the same data at http://www.airindia.in/Images/pdf/TimeTable.pdf.

From Mumbai, it shows one 747 flight, nonstop to Hyderabad and continuing to Jeddah; and 787 flights nonstop to Delhi, London and Singapore, with continuing service to various other places.

Since the Boeing 787 & 747 are long-haul aircrafts, it is mainly used for international trips, esp. with high passenger numbers for profitability.

Occasionally, the 747 & 787 are used to fly these domestic flights:

tracking them, i got route information of each aircraft 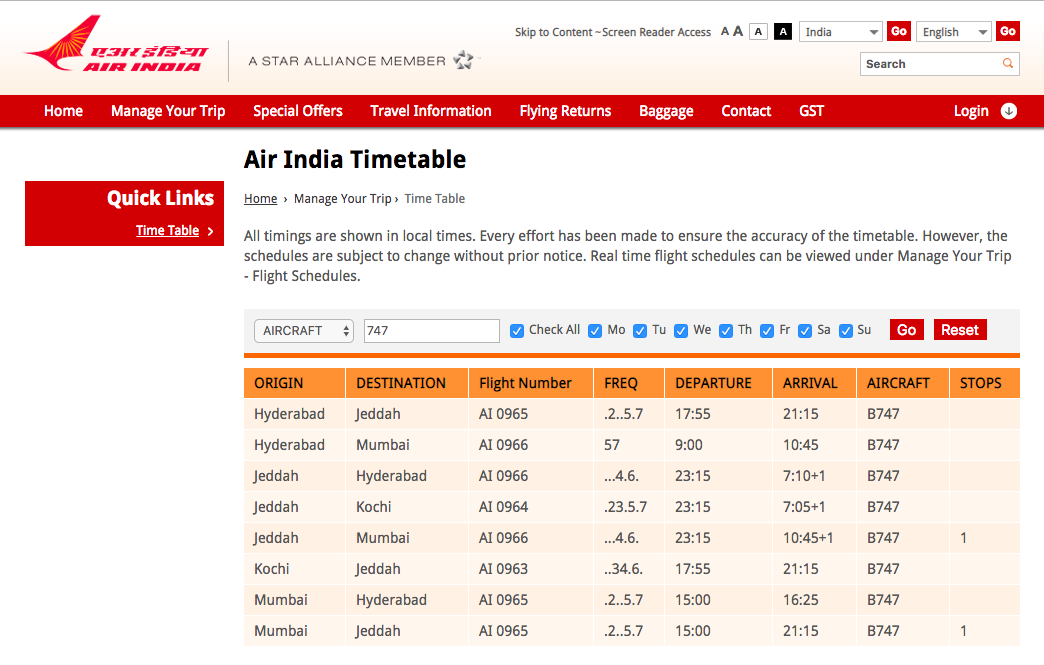 Not the answer you're looking for? Browse other questions tagged air-travel routes aircraft flight-search-engines air-india or ask your own question.

29
How to find and compare flights carried out by a specific type of plane?

15
If I book a return journey with Wizz Air and miss the first flight, can I still take the return flight?
11
Is it possible to fly both the Airbus 380 and the Boeing 787 in one trip?
29
How to find and compare flights carried out by a specific type of plane?
8
Air Asia and Air Asia X on same flight, what's the difference?
13
Help a nervous flyer plan routes that minimise flight changes and time spent in the air
4
I am departing on an Air India flight from KTM before the Thai Airways lounge opens. Is there another lounge I can use?
2
Find destinations or routes where JAL flies its aircrafts other than Boeing 7XY-Z
5
Am I eligible to some compensation if Eva Air changed the destination of my flight (was Hakodate, and became Sapporo)?