What were the indefinite validity visas that used to be issued by the US before VWP was created?

According to the State Department:

This seems like a curious type of visa and certainly a big luxury compared to the modern VWP system. My questions are:

Burroughs visas were antecedents of Machine Readable Visas (MRVs) and ceased being issued in May 1994, with none valid after 1 April 2004. While they were business and tourist visas with indefinite validity, they were non-immigrant visas. Although the bearer could remain in the US for lengths of time, they were not residents for purposes of immigration.

The Department of State Bureau of Consular Affairs gave the history in the Federal Register 22 CFR Part 41:

Before the [Machine Readable Visa (MRVs)], non-immigrant visas were issued using a device called a Standard Register protectograph, otherwise known as a Burroughs certifier machine. It produced what was colloquially known as a "Burroughs visa," an indelible ink impression mechanically stamped directly onto a page in the alien's passport. Over time, Burroughs machines were gradually replaced by MRV technology, which is now used exclusively by all non-immigrant visa issuing posts throughout the world.

Cessation of Indefinite Visa Validity for "B" Visas

Prior to MRV technology, Burroughs visas were issued to alien visitors for indefinite validity periods whenever an enabling reciprocal arrangement was established between the United States and a particular foreign government. Because a Burroughs visa would last for the life of the passport containing it, consular officers were authorized to issue, where appropriate, a non-immigrant visitor visa with an indefinite validity period. MRVs, however, have a lifespan of ten years. Consequently, in anticipation of replacing Burroughs visas with MRVs, the Department instructed all posts, effective April 4, 1994, to cease issuing visitor visas with indefinite validity. The maximum validity for a non-immigrant visa is now ten years.

Elimination of the "Bearer(s)" Annotation

Burroughs visas contained a space in which a consular employee was required to write the name of the alien to whom the visa was being issued. An alien's passport might also include family members, such as a spouse, or children, who also had to be listed on the visa. In March 1983, in order to expedite the issuance of non-immigrant visas and to improve operational efficiency, the Department authorized the use of a "bearer(s)" stamp for certain countries so that consular officers would not have to spend time writing in the applicant's name (and those of accompanying family members). MRVs, however, must be issued individually to qualified aliens. Consequently, the "bearer" annotation has become obsolete.

I can't improve on Giorgio's excellent answer above, but while searching out some other paperwork I came across my old passports dating from the 1980s, one of which contains my Burroughs visa from that time, stamped in my blue British passport. 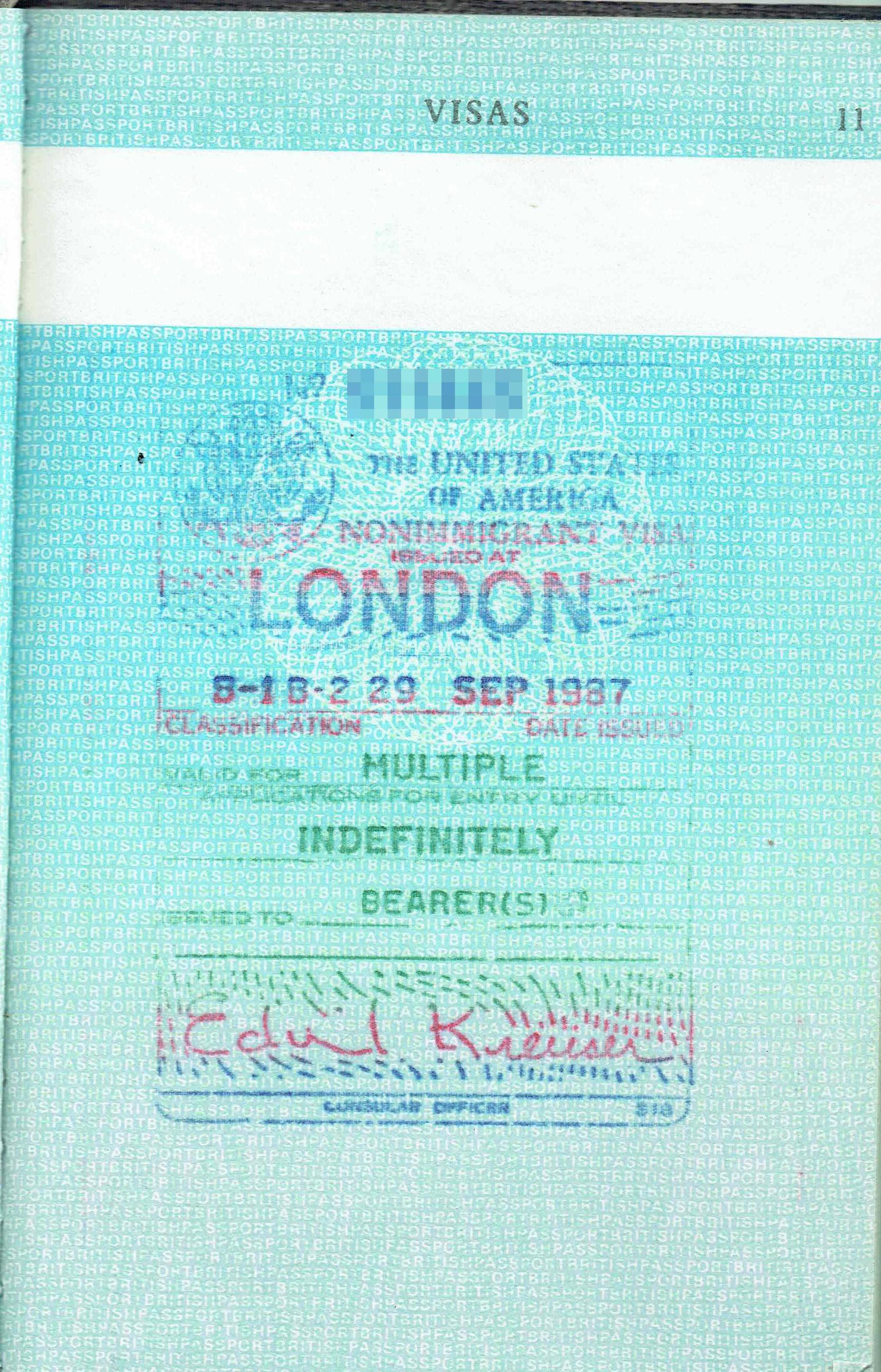 I got one (when I was child). I went in US for first time (like my family) for a full booked touristic tour. As far I know, we didn't asked anything special, I think it was the standard tourist visa for our country. Note: I was a children so no personal financial record, and US could not forecast what kind of job I would get as adult.

I used that visa twice, last use it was just few days after the "converted 10 years validity", but it was still OK. Just the Immigration officer cancelled it with a huge X, and he told us that it was converted to 10 years some time ago.

As far I know, it was cancelled not because of Machine Readable Visas, but because of introduction of Visa Waiver Program (VWP), so removing the need of a visa in such "trusted" countries. So now I doesn't need a visa (so in principle I still have a "visa of indefinite validity"). Just that in my last travel with such visa, because I had the visa, I should not complete the VWP form, now I need to do it (as ESTA form).

I have an "indefinite Class BII visa" in my 1972 passport. I was a student at the time. The application form was extremely lengthy and detailed. I had to be interviewed at the US embassy in London where they asked my three questions (also on the form): 1. Was I or had I ever been a member of the communist party. 2. How long did I intend to stay. 3. Did I jave enough funds to cover my stay. The visa (tourist) allowed me to stay up to three months. That was it. My 1972 passport was returned with a clipped corner and I was instructed to take it and present it along with my new passport as the old one had a valid "indefinate" visa. I have not travelled to the US since 1972, and many of my work colleagues were telling my that they were completing "visa" request firms on the plane journey over to the US. Sounded a little risky to me as what would happen if the visa were to be refused? Presumably an immediate return flight home! Anyhow, I understand things have changed again visa application wise due to the elevated security checking nowadays......Cheers, Jon

29
What happens to visas that last longer than a passport?
12
Can I re-enter the USA on an ESTA within a 180-day period?
5
What does this visa mean? Did I overstay?

11
Can visas be stamped in an old passport, provided that I have a new one?
10
Are Australian citizens now or in the very near future about to get ten year visas for China?
3
Tourist visa for Spain with adverse UK Immigration history
15
Repercussions of denied entry on Schengen zone without a visa
6
How to obtain a Schengen visa after being denied entry to Germany with a visa issued by Spain?
3
Why were we denied boarding?
2
VWP Question answered wrong