I'm an Australian citizen who, after graduation, wants to spend 6 months travelling, most of that in US, and return for a graduate job in Australia after that 6 months.

My plan was to use the Visa Waiver Program to enter for the first 90 days, then after that's up, either return to Australia or explore the UK for a couple of weeks, and then return to the US.

A good note from some of the other questions I've read is that I do not have a significant other in the US, nor any family. And I have very tangible motivations to return to Australia for my graduate job.

To return to the US for a seventy-day visit just two weeks after a 90-day visit seems very risky. You might just get lucky and sail right in, and in fact this is probably more likely than not, but if a CBP officer decides to scrutinize you, you could run into trouble.

There's nothing inherently against the rules with your plan, but it could raise suspicions that you are trying to abuse the VWP. A safer alternative would be for you to apply for a B-2 visa, which allows stays of six months by default. If you had such a visa, your short trip out of the country after three months could in no way be seen as an attempt to beat the rules. Additionally, B visa visitors do not have a statutory requirement to holda round-trip ticket.

As an Australian, if you are granted a visa it will normally be valid for a year, but if you pay an extra USD 25 "reciprocity fee" on top of the normal USD 160 visa fee, you'll get a five-year visa. For more information, see https://travel.state.gov/content/visas/en/fees/reciprocity-by-country/AS.html.

Note that the validity of the visa has no bearing on how long you can stay in the US. It only needs to be valid on the day you enter, and the initial period of stay granted to you will be six months.

We actually have the CBP's answer to this: 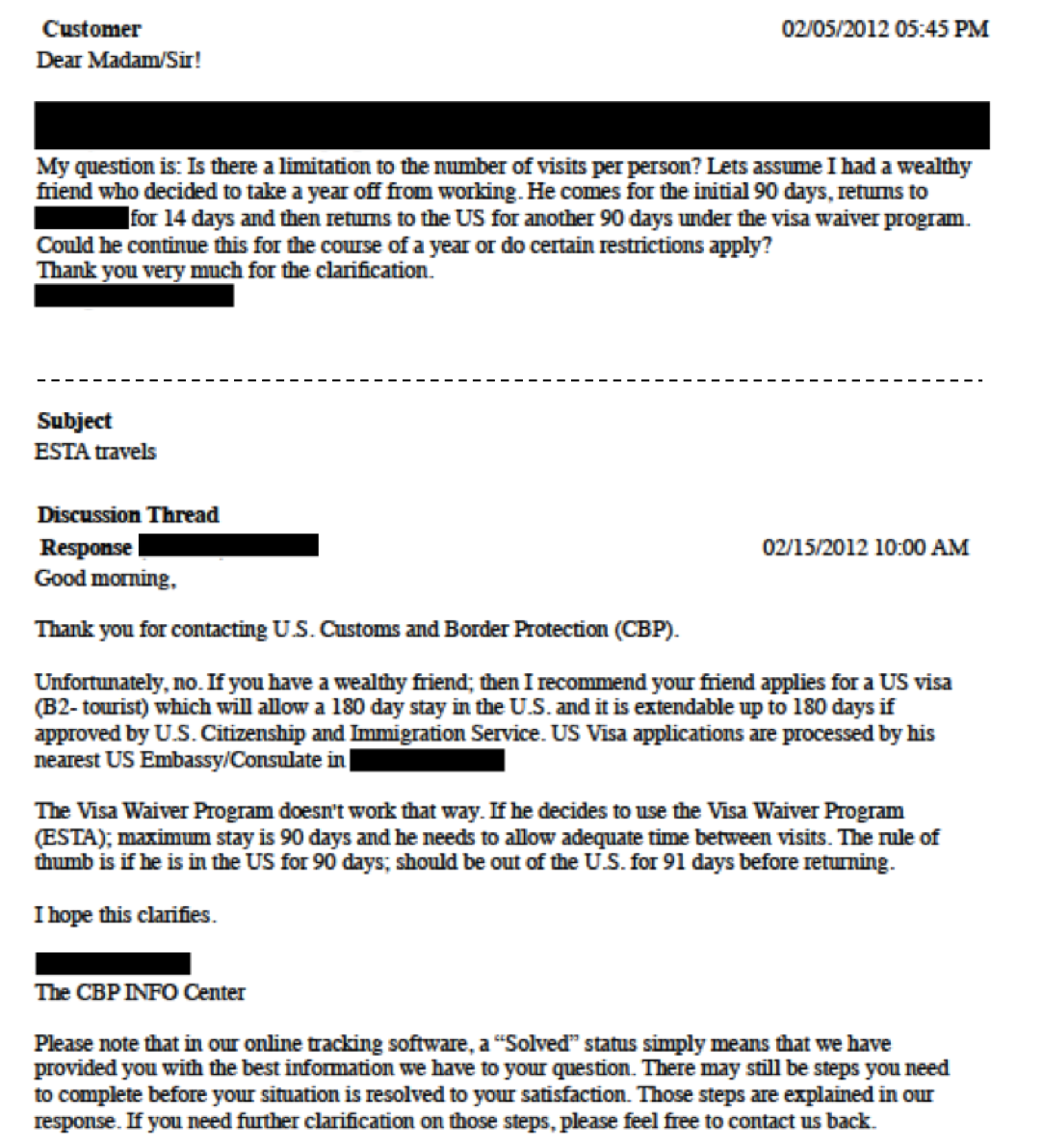 In short: yes, this is risky!

1) since i do not know where I will depart to until closer to the date (I will already be in the US) I plan on buying a one way ticket, will that raise red flags?

Timatic, the database used by airlines, states the following about VWP passengers:

Passengers must hold a return/onward ticket.

And when checking in for US flights in particular, airline staff is bloody strict, as they face huge fines and possibly loss of licence to fly to the US if they don't get it right.

So in fact, you have to buy a refundable return/onward ticket to anywhere but Canada, Mexico, Bermuda or the Caribbean, or you're not getting on the plane to the US. That isn't to say, though, that US immigration will ask for a return flight confirmation themselves - never happened to me.

2) Will I have any issues in returning to the US after a couple of weeks i spend in either AUS or the UK?

Most likely yes. As well as your return/onward flight confirmation (real or "ploy"), attach, in an A4 soft binder, every single piece of evidence that you have of your ties to Australia, including a good signed and stamped letter from your university with their contact details clearly stating that you're in good standing and expected to be back for a graduate job at a certain date. Be prepared to present the documentation if asked, both on your first and in particular second trip.

The following is what I got from the CBP via E-Mail.

Meaning: your trip is doable, but you should be prepared.

Other answers have suggested applying for a B2 visa, which would eliminate the need to buy a refundable return/onward ticket, but costs much more, as much as outlined by @phoog. You are also subject to much closer scrutiny this way, and if they deem your ties to Australia to be insufficient, you'll be refused with no refund and it is unlikely you'll ever be able to enter visa-free again.

As such, getting a visa only makes sense if you would like to stay for more than three months at once (as with a visa, you normally get to stay for six months on each entry). The CBP did not mention this being the preferred path, but simply that proof of ties to Australia should be prepared for presentation at the border

3
I was on a J1 visa for a year, it has now expired I want to return on an VWP
10
90 day visa waiver for the US want to re-enter shortly after for a few days
6
Will I Experience Issues At Immigration Attempting To Stay With My Girlfriend For 85 Days On VWP?
1
Crossing the border 3 times in 24 or 48 hours
5
Going to the USA to visit online friends after a trip to Morocco
4
Is a flight to Canada sufficient evidence of onward travel from US?