At the moment, I'm driving around in Québec. I've noticed that the green traffic light can be blinking or constant. I assumed that I'm allowed to drive in both situations. However, is there any difference? My first guess was that the blinking light indicates that I have to be careful when left turning because of traffic from the opposite direction, but this does not always to be true.

So what exactly is the difference?

In Québec, a flashing green traffic light means that no cross-traffic can go, even the traffic on the same road coming from the other direction has a red light. This means that (if allowed) you can make a left turn without having to yield (except possibly to pedestrians in the cross street). See e.g. this or this advice on the peculiarities of driving in Québec.

Note that in some other Canadian provinces, such as British Columbia, flashing green lights have a different meaning which allows cross-traffic.

On a related topic, note that a flashing red indicates that you must mark a stop, but may then proceed after yielding to all traffic that reached the intersection ahead of you: a flashing red is equivalent to a stop sign. On a solid red, you must wait for the light to change. As an exception, in Québec like in most of North America, you may make a right turn on a solid red after marking a stop and yielding to all traffic; however some municipalities forbid right turns on red.

In Ontario, pretty much all of the flashing greens have been replaced with green arrows. When we had flashing greens, they were inevitably accompanied by a sign "advanced green when flashing". This referred to the fact that you were getting the green in advance of the traffic moving towards you, and so could freely turn left (or go straight.) Some intersections had "delayed green when flashing". 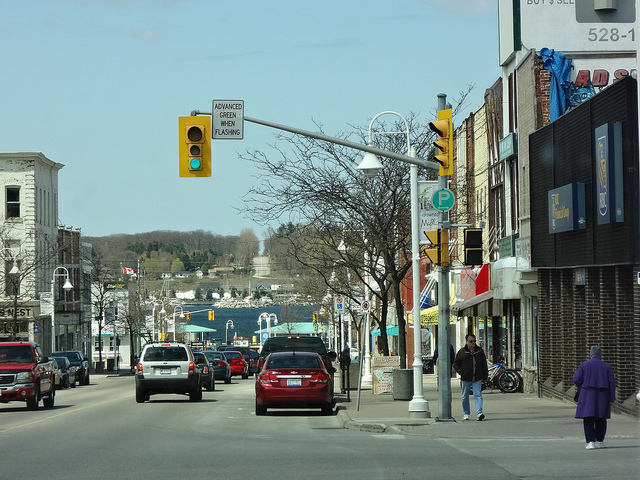 The photo license won't let me crop it to just the light. Says it was taken this summer, so some of these are still around I guess.

Since you need to both read English and know what "Advanced Green" refers to, these have mostly been replaced with a green arrow, which is probably safer. (Page 16 of Ontario Traffic Manual, Book 12 – Traffic Signals (PDF) says they are being phased out as of July 2010. It's not aimed at drivers, but makes for interesting reading.)

Don't assume you know what a flashing green means in another province: look for a sign.

I know you asked about Quebec but I think it's useful to point out that blinking can mean wildly different things:

In Austria, a green traffic light will blink green four times before switching to yellow and red.

This is meant as a pre-warning to avoid people driving through "dark yellow". Austrian drivers know this and will usually stop at yellow (not red). They will also honk angrily at people who brake at blinking green. Drivers who don't know this Austrian specialty are thoroughly confused.

It's also worth mentioning that, in Austria, the duration of the yellow phase (before red) is always the same length -- opposed to for instance Denmark, where the yellow phase is much longer in complicated intersections because the traffic planners know that it takes longer to clear the intersection before the next traffic direction can start.

The green arrows mentioned in another answer exist in both Austria and Denmark; presumably throughout Europe. But even though many traffic signs have been standardized across Europe (or the EU, whatever) it is evident that many exceptions still exist. Standards... sigh.

(I'm from Denmark but live in Austria. I prefer the Danish method because it varies on a case-by-case basis, sometimes even depending on the time of day or on traffic sensors in the lanes.)

Apart from Quebec, a flashing green light has a different meaning in Turkey (and possibly in some other European countries).

At some point during the night (usually around 2am), the lights switch to blinking mode to show the right of way to drivers. All lights in an intersection goes to blinking mode in red, yellow or green and the colors don't change. This is for not making drivers wait in a long red light where there's no traffic.

Blinking green means you have the right of way, but use caution as some wreckless driver may not see you.

Massachusetts has these, though they are rare and being phased out. They indicate a crosswalk with a signal that can be controlled by pedestrians. They are intended to warn drivers to be prepared to stop/yield for pedestrians. They are generally used at unusual crossings: diagonal, 3-way intersections, 5-way intersections, and are often combined with a yellow and red light that shine solid when a pedestrian requests a walk signal.

Blinking green should be the indication that green light ends and yellow and red appears. It is a usefuk info letting the driver to adjust his driving to the green light end situation, hence no need for hard braking when approaching the intersection.

Not the answer you're looking for? Browse other questions tagged canada driving traffic or ask your own question.

20
How to cross a road by foot in a country that drives on the "other" side of the road
14
Unmarked T/Y intersection. Where do I turn left?
10
Roundabout in left drive countries
9
How to safely turn right in Thailand
0
Coordinated traffic lights
10
What does amber - green traffic light mean in South Korea?
17
Traffic law UK, pedestrians
7
Left/right right of turn on an intersection in USA