Is there a way to tell in which direction a London Tube train will pass the station platform?

to enter as part of journey planning.

But in order to make use of this information (unless one wants to risk running along a busy platform through gathering crowds as the train arrives), one needs to know from what direction a Tube train will pass the station platform.

Is there a general way, while standing on a platform, to determine — perhaps from subtle signage clues, or track arrangements, or even something about the infrastructure of the platform — from which direction a Tube train, especially a deep tube train, will pass the station platform? Is there a way to anticipate (other than an announcement) the sequel while riding on a train: on what side the doors will open?

For the most part, tube trains travel on the left. So, if you have a reference to the other platform, you can deduce in which direction the train will be travelling.

On a few of the older cut-and-cover lines, we have two tracks running down the middle with platforms on either side (i.e., you can look across the tracks and see the other platform). For example, this is true at Monument, Sloane Square, Fulham Broadway, Cannon Street and many other stations on the Circle/District lines. Here the trains travel on the left.

At smaller, newer stations where there is only one line, the platforms are usually in the middle of the two tracks. Sometimes there is a single "island" platform (e.g., South Kensington) but on the deeper lines the platforms are separated, in their own tunnels: either way, the principle still holds. Again the trains travel on the left, so you can use this to infer the front of the train.

At big stations where many lines intersect, it is harder to follow the principle; sometimes the trains switch sides or the platforms are optimized for connections between different lines. A close look at the actual track and platform arrangements illustrates these patterns as well as some of the notable exceptions:

As a result, deep tube trains generally run to your right as you stand on the platform facing the tracks, while sub-surface trains run to your left.

In the end, once you do a journey quite often you will automatically find yourself going to the most optimal part of the train and it becomes second nature. If you are only doing it once, it probably is not so important.

Look for the end of the platform with TV screens. These are at the front of the train in the direction of travel because the driver uses these screens to view when it is safe to close the doors.

Here's a some things an observant rider will see:

To know which side the doors will open will require either local knowledge/experience, or station maps. MTA / New York City Subway has the station maps on their website. I would expect (don't know though) London Transport to has the same.

Ask a station attendant (if there are any) or one or more people waiting.

For example, at Tottenham Court Road the front of the Eastbound Central Line trains is at the ticket hall end of platform 2. The platform is on the right side of the train, facing forwards.

The enthusiast map at http://carto.metro.free.fr/cartes/metro-tram-london/ shows, among other things, where the platforms are located relative to the tracks at each station.

Knowing that the trains usually run on the left (the exceptions are noted on the map too, notably Central Line at White City, Northern Line at London Bridge and Bank, and Victoria Line between Warren Street and St Pancras), this should enable you to predict which direction the train will go when you stand on the platform facing the train.

One thing that surprisingly hasn't been mentioned; there's usually a digital (or possibly sometimes analogue?) clock right at the end of the platform at which the front of the train stops. 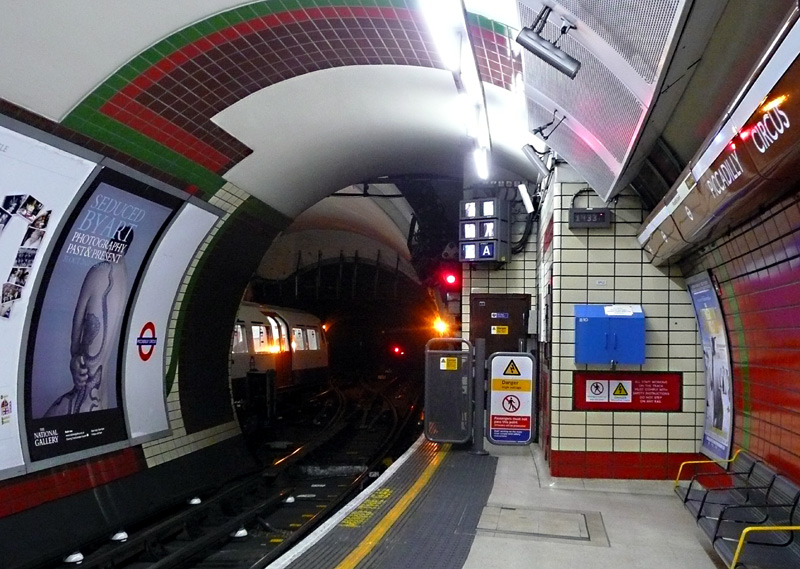 In this photo the digital clock is above the blue box on the right.

Not the answer you're looking for? Browse other questions tagged public-transport london tfl or ask your own question.

84
Orienting oneself after exiting an underground station

29
What is the fastest theoretical route for the London "Tube Challenge"?
10
Is it possible to deduce the London Underground line based solely on the set number at the front of a train?
8
Quickest way from London Paddington station to London City Airport?
18
What's the quickest way from London Kings Cross to Euston, by foot or tube?
14
Is there a website that tells me the quickest way between two London Tube stations?
7
Quick way to exit King's Cross tube station?
19
Is there a map that shows the walking time between London Tube stations?