I currently reside in Toronto, Canada and I'm thinking of travelling to Sanur, Bali (Indonesia). If I need to be there on a Saturday at noon Bali time. What flight time should I pick in order to arrive in Sanur before noon? I just don't understand if I would be there same day or the day after from Toronto.

I first Googled sanur airport and without clicking anything I can see it says "Sanur is a 20 minute taxi ride from the Ngurah Rai International Airport" and several "Transfers from Bali Denpasar International airport to Sanur". OK so our airport is Denpasar. Next I entered Toronto and Denpasar into Kayak and restricted landing times to Saturday. 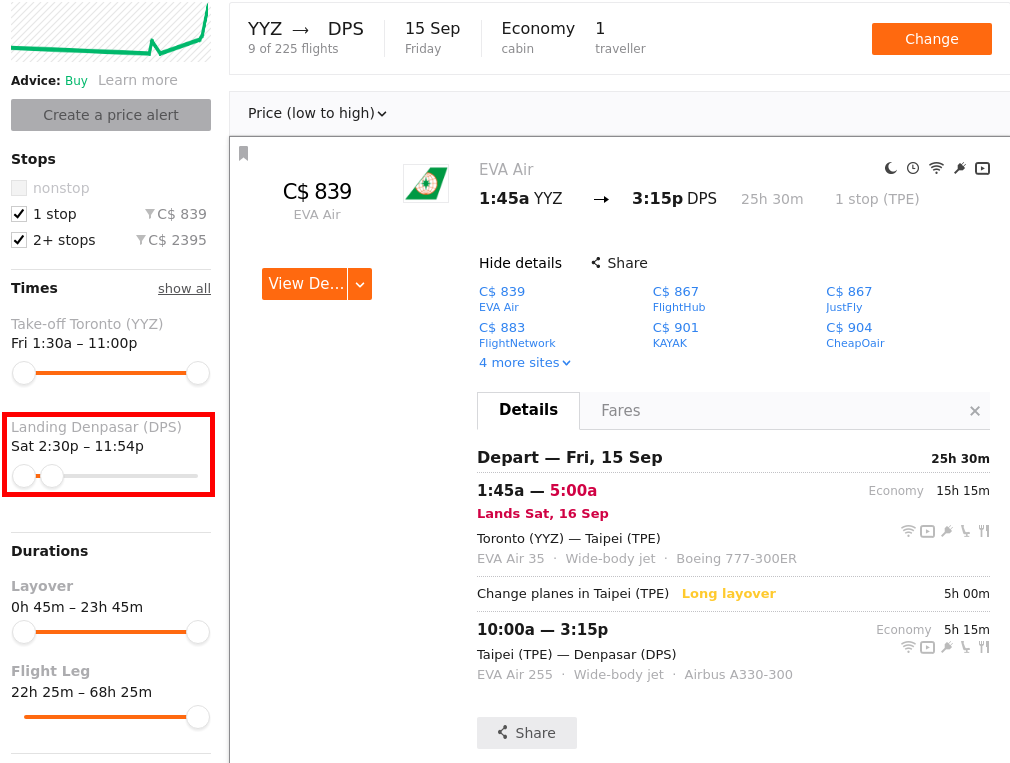 It prints in big red letters that it lands on Saturday. So then it would seem that unless you want to leave really, really early from Toronto, Friday won't do. Leaving on Thursday: 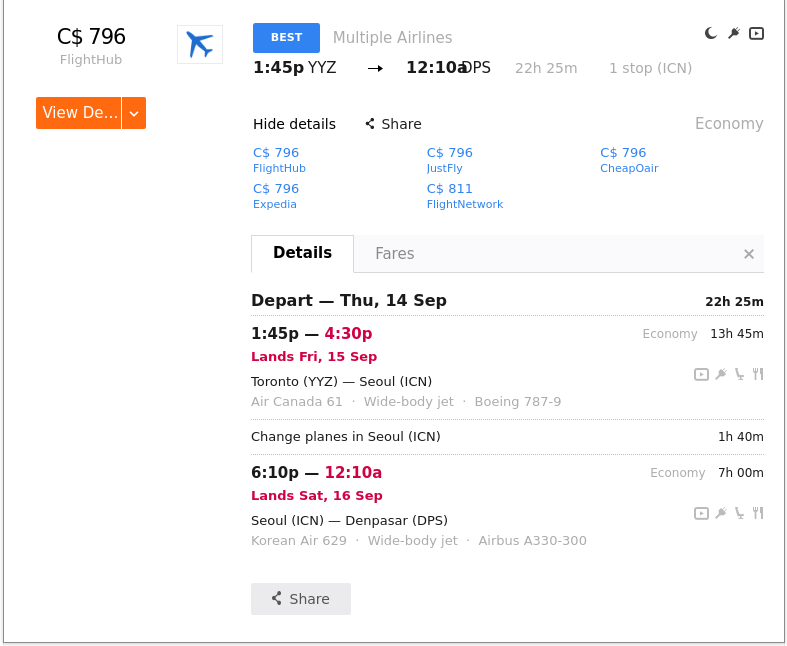 As a rule of thumb, on this route apparently it takes a day to fly (plus/minus a few hours depending on route and layover) and half a day timezone difference (this is actually 12 hours) -- from Toronto to Denpasar, both ahead. So leaving Toronto Thursday early afternoon lands you in Denpasar at a time which is Friday early afternoon in Toronto and accordingly just after midnight in Denpasar so you can take a good night sleep before doing whatever you needed to do in Sanur Saturday afternoon. I personally would certainly prefer such an itin because it takes care of adjusting to the Denpasar TZ: you will be dead tired by the time you land, and it is, indeed, night. As a general rule of thumb unless I have friends/family picking me up at an airport hotel, I would sleep at the airport and figure out my way to the destination the next day. After spending 20hrs in a dry overpressurized aluminium tube I just want a bed.

Finally, according to ITA Matrix which is able to search for routes regardless whether seats are available, this 22:25 flight is actually the fastest if you are leaving on a Thursday. It says something about the distance that going the other way around via Amsterdam and Singapore only takes 24:50.

Not the answer you're looking for? Browse other questions tagged air-travel canada bali timezones or ask your own question.

2
Long Beach Airport arrival times
11
What is the safest and cheapest way to see Komodo island, leaving from and returning to Bali?
4
What specific security checks does one have to do when departing YYZ as of December 2015?
8
Can I claim my luggage if I am forced to stop after only the first leg of my journey
1
At what point in US transit do I have to clear Canadian immigration (final destination Canada)
2
ESTA reentry to USA after very brief initial stay in NYC. (2 weeks NYC, 2 months Canada, 2 months USA)
1
British person using VWP then visiting Canada before heading back to U.K..?