Can you get a refund of “additional charges” in addition to taxes?

My friend had a booking with Alitalia from London to Tokyo involving (due to pricing) a Milan-London leg on the return that he's not going to use.

I know the taxes for the unused leg (GBP 22) can be refunded on request, but what about the "additional charges" (GBP 34.20)?

He has completed all legs that he was supposed to use.

Below is a screenshot of the price for the unused leg 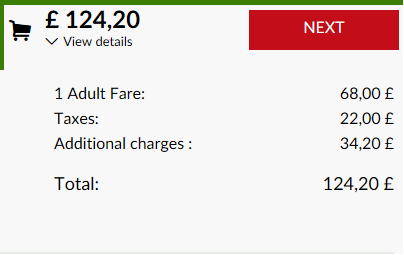 A quick search on matrix shows the probable fare that you show. On matrix the fare breakdown for a one-way X fare to be approximately £68 base, £34 YR and £22 taxes. YR is not refundable on non-refundable fare, only taxes and anything else that counts as airport/government fees.

Having said that, although the taxes are likely to be the same, you can't typically take a one way fare for a missing leg to determine what portion might be refundable. The airline also most likely reserves the right to reprice the flight according to the itinerary flown, and therefore might refuse to refund you anything at all if the repriced itinerary is higher.

Not the answer you're looking for? Browse other questions tagged air-travel airlines refunds taxes hidden-city-ticketing or ask your own question.

6
Refund of USA taxes and Passenger Facility Fees due to itinerary change?
11
Can you get a refund on your Octopus Card deposit at Hong Kong airport?
5
Can we get full refund on cancellation of ticket if embassy closed down?
14
Are there any airlines which refund fare (including economy class) fully in case you don't get visa?
13
Do I need to pay charges / taxes to drive in London on the weekend?
53
Airbnb - host wants to reduce rooms, can we get refund?
1
How can I reach Alitalia customer service?
6
If re-booked from a flight to a train, can one claim the airport taxes back?
3
Travel agency requires that I pay non-refundable taxes for a flight cancelled by the airline in order to get refund?