Who owns the middle armrest in airplanes? [closed]

Now, the best way to go about handling any kind of shared space is to be polite and civil with your neighbours. The point being: do not start to fight over the armrest as soon as you step on the plane. My experience shows that the middle armrest system tends to spontaneously evolve towards a stable point, in which all parties implicitly, and non-verbally, agree on how to use it by adapting to whatever one's neighbour is doing. The underlying assumption is that nobody is trying to force anyone out of the armrest. In contrast, all parties involved are actively trying to peacefully reach a consensus.

Now, one could go about suggesting a few guidelines on how to handle the middle armrest situation. First off, one should keep in mind that the person on the middle seat must share both armrest, since they don't have the exclusivity of the aisle or window armrest. Therefore, it would be most polite to let that person choose how to occupy the armrest first. Following their decisions, the neighbours can then adapt. In addition, know that two elbows can fit on one armrest by sharing the space, if one person puts their elbow towards the front of the armrest and the other towards the rear. See below for a horribly drawn inkscape diagram by yours truly: 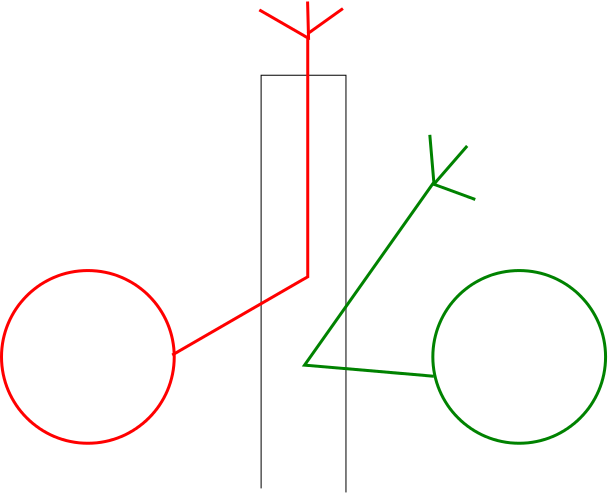 Finally, there are quite a few armrest etiquette online posts, newspaper articles, and informative leaflets stating that the middle armrests belong to the person seating in the middle seat, since the passenger on the aisle gets the extra legroom the aisle provides, and the passenger on the window gets the inner walls of the aircraft fuselage to lean on. I do not think I have ever seen this unwritten rule enforced. IMHO, being unwritten makes it hard to do so. Again, the best way to deal with the middle armrest situation is to be civilised and polite whilst trying to work things out without imposing.

Not the answer you're looking for? Browse other questions tagged air-travel regulations seating etiquette or ask your own question.

18
Statistically, is there a safest seat on the plane if it crashes?
7
Is it ever a good strategy to not select a seat when you are in unassigned status on American Airlines?
18
Flying family of 5: is any one seating arrangement better than the alternatives?
1
How to double-check and not pester airport officials?
7
Why does the window-side armrest never move?
2
BA 185, what airplane configuration is this?
36
Who goes first? Person disembarking bus or the bicycle?
5
Is the space in front of the first seat row in the middle of a cabin meant as a public passage?