My wife and I got bus fines today in Bologna. We had only recently arrived and had purchased a ticket from where we were staying which was about 6 or 7 km from the city. The hotel receptionist explained the ticketing system to us and said that if we buy a ticket we could use it on as many journeys for 75 minutes.

We took the bus from our hotel to Bologna and then straight away got on another bus to get to central Bologna where all the sights are. When we got on this other bus we assumed that it was ok as we were still within the 75 minutes.
However, when we tried to validate our tickets in the machine it flashed red like an error had occurred so we figured something wasn't right.

We tried to ask the driver about it or if we could buy a ticket but he just grunted and started to drive off. We therefore started to leave the bus at the next stop so we could try and buy another ticket but were ushered back on by a few men who turned out to be ticket inspectors!

They alleged that our tickets were not valid in the city and that we had to pay a 65 euro fine. They wanted to see our official documentation and so took details from our UK driving licences and issued us both with fines. They wanted us to pay there and then, but we explained we didn't have enough cash on us to do so and they then stated we could pay by card.

However, I still wasn't happy about doing that so he then said that we could pay later by going to an Italian post office; or if we don't pay within a certain time the fine will go up to 270 euros each and will be posted to us (he got our addresses off our UK driving licences)!

I am a bit miffed about this as we were noway trying to evade and as soon as we realised our mistake we tried to talk to the bus driver to buy a ticket or get off the bus, but he drove off and ignored us! I have a slight suspicion that it was a rouse as it is very strange that he did this and then out of nowhere bus inspectors got on and made a beeline for us!

If we go back to the UK without paying these fines and ignore the subsequent fines that they send us through the post (if they do send any), then what happens? Do they have any powers when we are back in the UK? a total fine of 500 euros for an honest mistake seems utterly outrageous. 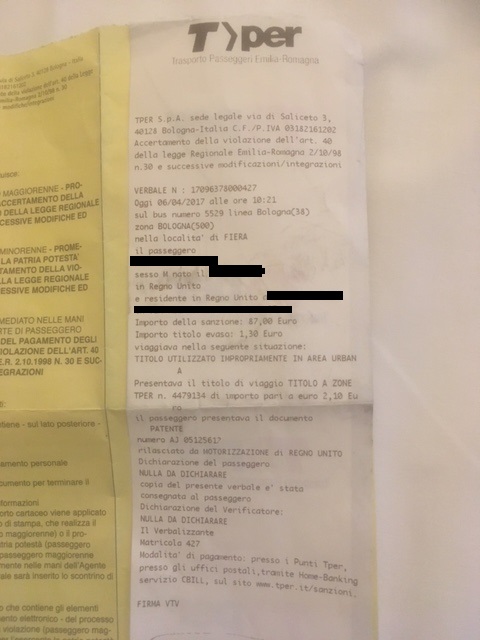 In Europe, they slowly start to send fines to foreign citizens. Having said that, country A would have very limited power to force you to pay if you are leaving in country B. They will send you a lot of letters trying to frighten you that the sky will fall on your head if you don't pay but the reality is that right now, nothing will really happen. This is especially true since you are in UK and UK is going to leave the European Union.

In most European countries, in order to be able to directly take the money on your bank account if you don't pay by yourself, a public authority would need to go to the court and have a final court decision. So do you think the Italian public authority would initiate a claim with UK court to achieve that? Certainly not...

There are some agreements that are being set to try to harmonize processes and make it easier for public authorities to collect money from foreign citizens but it is far from being something that is working well because it is always subject to conflict between country A and country B laws. Luckily, in Europe, you are still protected by your home country law while you are there.

And don't worry about Italy preventing you from leaving the country. The system are certainly not synchronized. And they have way bigger issues to deal with than to chase people like you.

Having said that, if I were you, I would pay the fine while it is still at a reasonable level, even if it is unfair. It is always better to pay when it isn't too expensive because even if today, nobody will chase you, maybe in 5 years, the process will have evolved and it will be easier for them to recover the money and you don't want to pay the hard bill at that time...

Not the answer you're looking for? Browse other questions tagged customs-and-immigration public-transport buses italy bologna or ask your own question.

1
How to Handle a “Bus Ticket” (fine) in Italy?
40
Leaving Italy without paying a fine for a bus fare violation

10
Should I get some Euros before I leave the US for Italy?
4
Is a Budapest "transfer ticket" valid for Bus then Metro then Tram?
8
Can I easily travel in Italy by bus/train without any prior reservation?
40
Leaving Italy without paying a fine for a bus fare violation
8
Bregenz to Vaduz - train/bus
8
How can I pay a fine I was charged with in Italy while I am now in Budapest?
3
Can I buy tickets for the ADO bus online, without a Mexican payment card?
3
Old Turin bus fine never sent me the letter to pay
8
If I am checked by ticket inspectors on the bus in Oslo with a ticket that expired over 1 hour ago, how to prove my ticket is actually valid?