What is the purpose of hook turns?

Firstly, I'm sorry if this is the wrong place to ask. I just can't really seem to find an answer anywhere.

My question is, what is the rationale behind hook turns? While I've never performed one, I think I understand how one is performed. I don't have a reason (yet...) to say that they're stupid, but I do want to understand why they're used. According to Wikipedia, it's got to do with trams' right of way, etc. On the Wikipedia page for hook turns, there was also a link to a really interesting newspaper article from 1954. It said that prior to the 1st of September 1954, all of Melbourne's right-hand turns were hook turns!

I believe the intent is that cars making a hook turn must wait for the signal to change before crossing, which de-conflicts their movement with the trams. With a normal right turn across tram tracks, drivers would have to do one of two things:

(Note that for the rather mediocre diagrams that follow, I've used an image of streetcar tracks in San Francisco, courtesy Ken Lund, as I wasn't able to find a suitably licensed picture of Melbourne that works for this purpose. Accordingly, the cars drive on the right and the turns in question are left turns. If you're in Melbourne, everything in the Northern Hemisphere is upside-down to you anyway, so this will make perfect sense.) 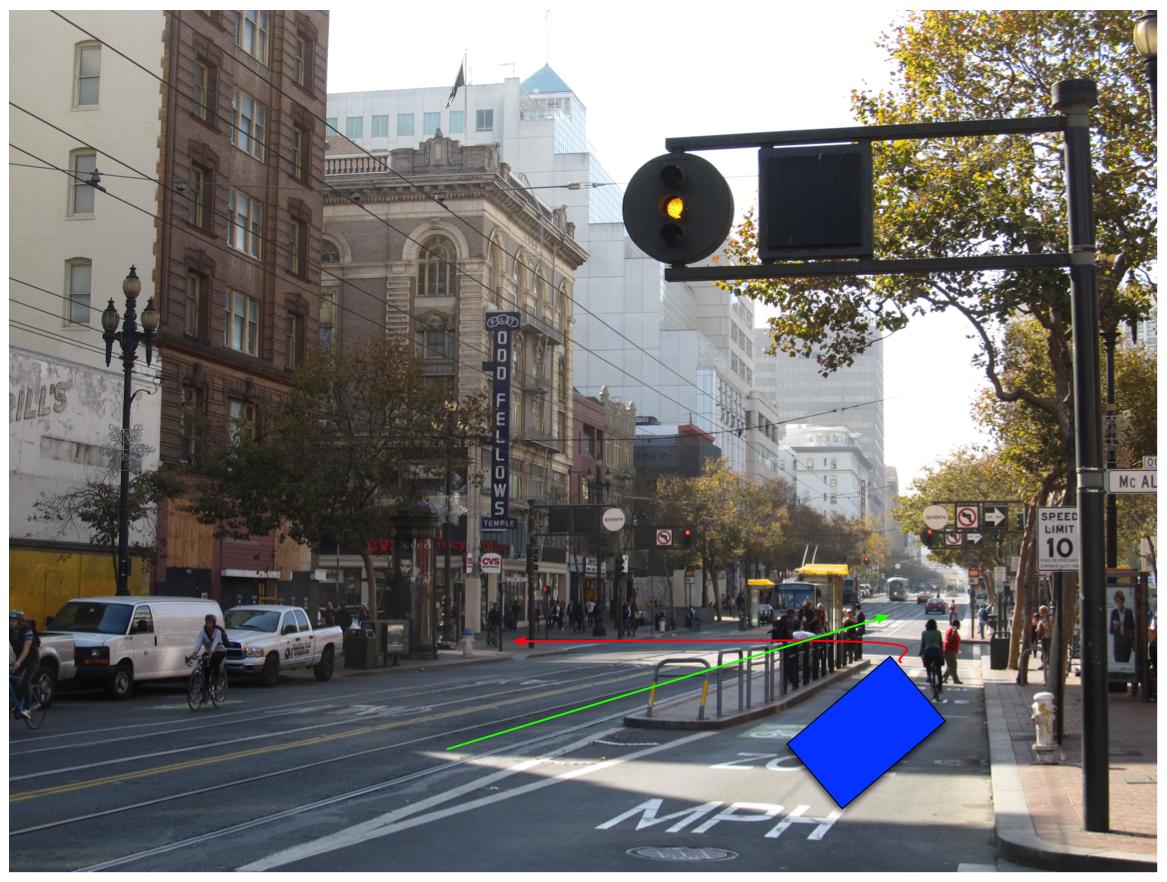 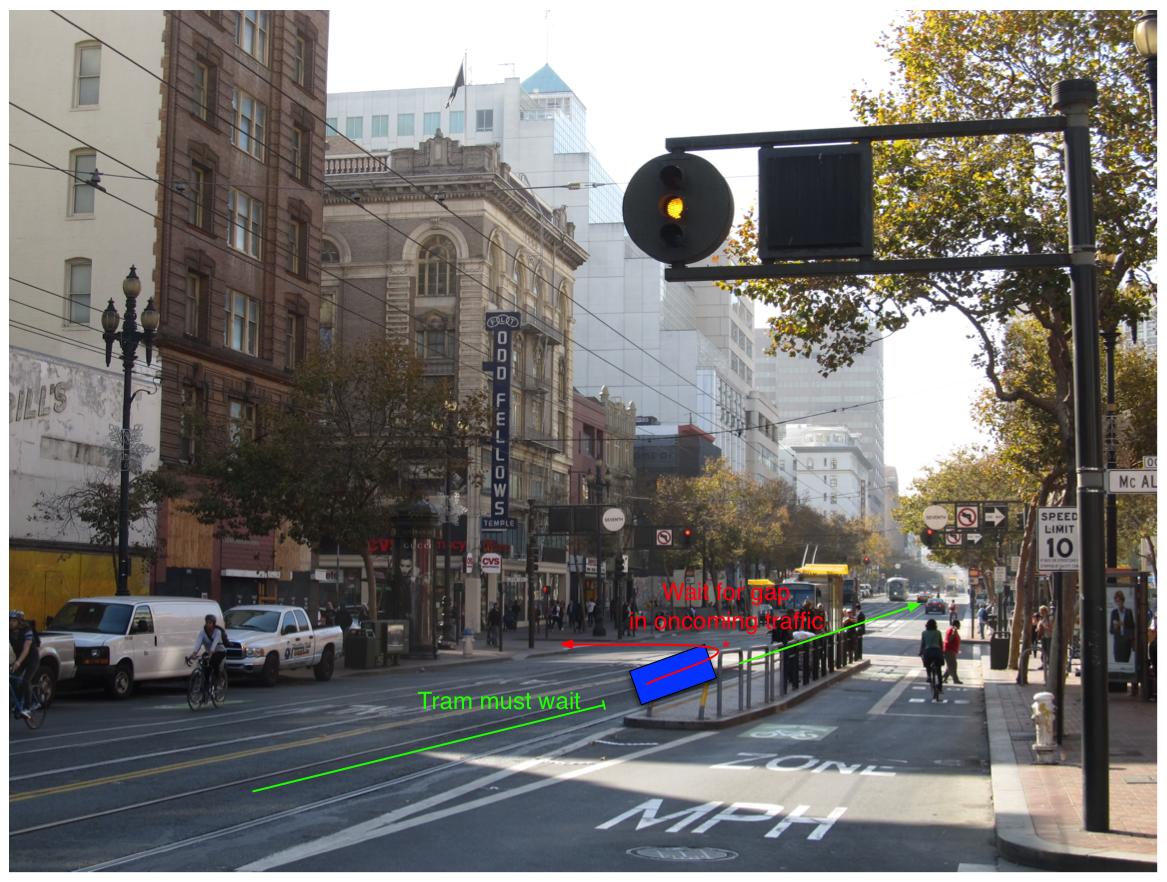 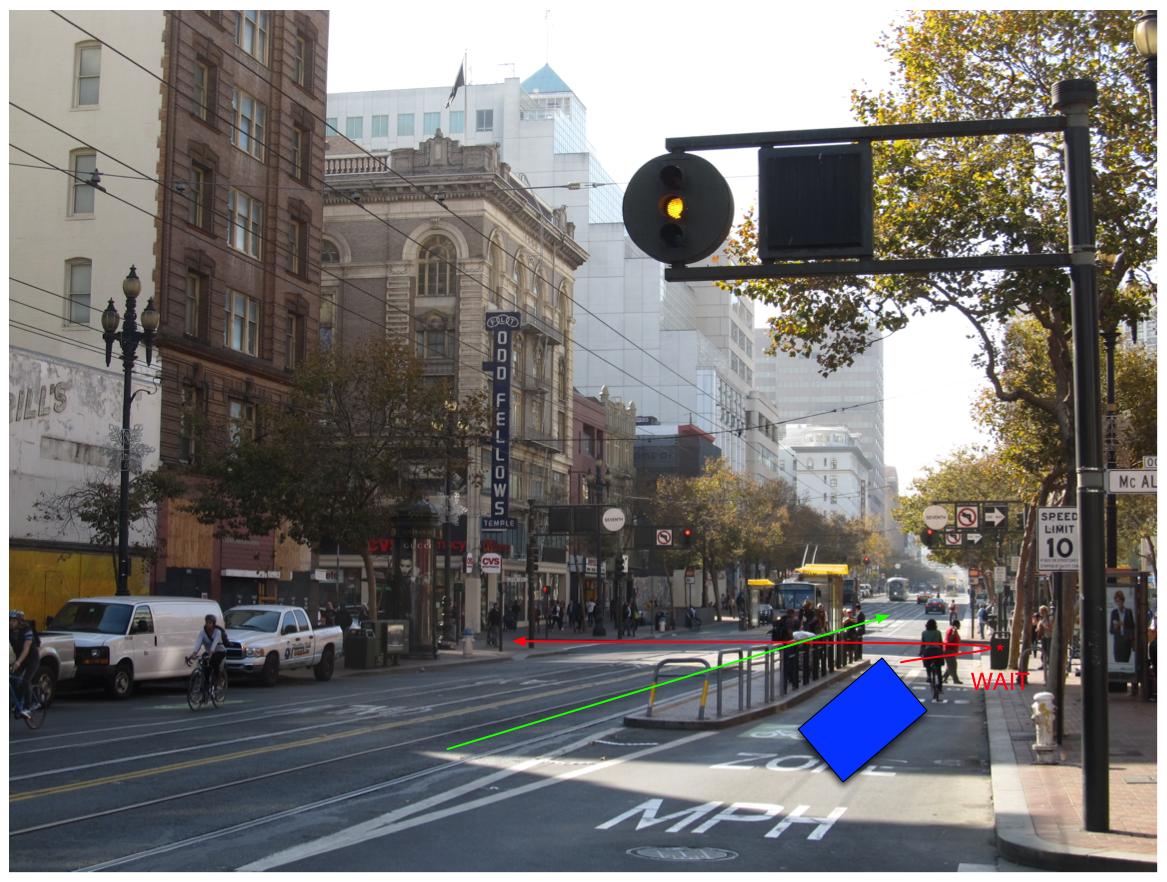 Here, the blue car moves all the way to the right and gets out of the way. He must wait until the traffic light changes before proceeding; he can only complete the hook turn after the light changes. There is no danger of a collision with the green tram, as it will have a red light before the blue car proceeds with his turn. This video of a Melbourne bus performing a hook turn is also instructive.

According to the paper, "Managing Trams and Traffic at Intersections with Hook Turns"1 (well, the abstract, which is all I've got at the moment anyway), hook turns in Melbourne reduce tram delays, saving a great deal of time and the transit authority millions in costs, while offering "better safety performance than conventional intersections." It also helps that 38% of drivers avoid making hook turns, which is basically the "we'll make something annoying enough that maybe a bunch of you just won't do it" school of traffic engineering. In short, it's about both safety and efficiency.

You are correct. In Victoria, for reasons that are lost in the mists of time, originally every right turn was a hook turn.

In the mid 1950s this was changed to the 'diamond' turn, and diamonds were painted at vast expense on practically every major and minor suburban intersection to train us. I remember this well. 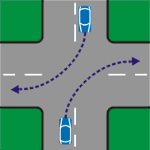 Diagram of a diamond turn

However, originally all intersections where trams cross were exempted from this, and this was later restricted further to just five City intersections: Swanston with Flinders, Collins, and Bourke, and Elizabeth with Collins and Bourke. These were left as hook-turns to facilitate trams. Some time in the late 1990s this was 're'-extended to most of the City intersections involving trams.

The basic idea is to clear the trams before the right-turners. If you're already camped across the tram-tracks waiting to do a right-hand turn, it is not legal for another vehicle, say a tram, to enter the intersection until there is room for it on the other side, which might never happen given that cars can accelerate into that position faster than trams can.

The key point, that isn't exactly obvious in the description, is the vehicles waiting to turn are waiting outside the traffic flow. Meaning, they have essentially pulled over while waiting to turn while forward traffic continues.

They then execute the turn during the signal change after oncoming traffic has stopped.

This is essentially similar to many US States where it is legal and expected to wait to make a left turn inside the intersection. The major physical difference being the turn lane is between the travel lanes.

Very simply, its so the turning vehicle does not block continuing traffic.

This would be better as a comment but I haven't earned comment rights on this SE yet :-) There's a second definition of hook turn which I encountered when learning to drive in New Zealand (and again 30 years later when getting my HT and passenger licenses): On a single carriageway high-speed road (e.g. a rural highway) a hook turn may be used to safely turn across the opposing traffic lane into a side road or vehicle entry. E.g. (driving on the left) - if there is oncoming or following traffic I would pull over to the left shoulder just before the turn point and indicate to the right, waiting until the traffic has passed before completing the turn. This avoids you being stationary in the traffic lane. There are wider shoulders at many rural intersections to allow for this. I have found that in practice, driving a school bus, it sometimes doesn't work - following traffic has come to a halt behind me instead of passing. I blame this on American video games where it is illegal to pass any school bus.

However, on researching, I found that the type of hook turn described in the wikipedia article linked above has recently been introduced in New Zealand.

Not the answer you're looking for? Browse other questions tagged driving australia melbourne or ask your own question.

10
Driving from Melbourne to Sydney on the Hume Highway, where should we stop for the night?
8
Is it feasible to visit the Yarra Valley by public transport?
23
What is the purpose of numbers on some UK street name signs?
4
What does the $900 limit apply to in Australia?
5
Purpose of stickers copying license plate number?
11
We are on WHV, my boyfriend was in a small collision, we are leaving in 2 weeks what happens if we don’t pay the damages?
26
What does "Drive Friendly -- The Texas Way" mean?