What does the following UK leave stamp mean?

The user behind this question, a US national with a previous UK visa refusal, was recently subject to extreme scrutiny at Heathrow Airport before being admitted, albeit with a custom leave stamp rather than the standard one. 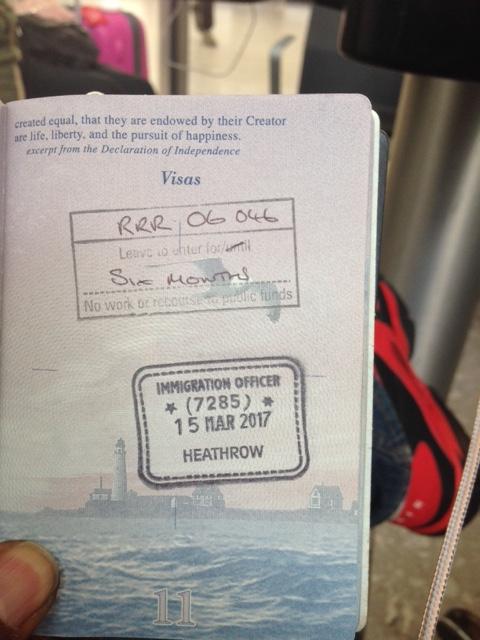 The stamp (along with the handwritten information) is leave-to-enter issued to a non-visa national under Paragraph 23A of the rules...

The "RRR 06 046" is the index key of the person's landing card. The landing card has notes on it and will be kept on file according to the procedures in their Operations Manual.

The next part is the term, which is 6 months. Under that are the restrictions: no work or public funds

Under that is the rounded rectangle stamp issued to anyone admitted, including those with entry clearance.

Finally we have the date and the port of entry, Heathrow.

They used this particular stamp because they needed a place to write the index to the landing card so they can retrieve it if the need arises. I am given to understand that the person was detained and his biometrics were enrolled. During that process they learned some interesting things and made some notes about it, hence the need to tie his passport to their records.

Personal observation: These things are a source of anxiety. I have seen these things for a long, long time and have consistently given this advice...

There is nothing that can be done about it and there is no way to purge it from their records. They are entitled to make a notation and if it has meaning for them, so be it. Just go about your business and deal with them in a stand up way and let them look up whatever they want. Exhibiting fret and worry will only trigger the IO's radar (quite probably what happened in this case).

You can make a Freedom of Information request and they will send back a scan of the FRONT of the landing card. All of the "juicy stuff" will not be released because it may assist the person in evading immigration controls.

It means the final canonical answer to anyone who is stressed out about something an IO wrote in their passport is to ignore it.

If you expect problems transiting UK immigration controls, get an entry clearance. It's the only way to "clear the slate" and have a stress free landing interview.

My experience when I was detained at Heathrow May 2016 was as a result of an Officer in Portsmouth that had a gripe with Australians and stamped my passport with one of those alerting visas.

I've written several letters to Home Office, without any luck. You are correct in that a flag is retained for 10 years, regardless if I was still allowed into the UK and have it in writing, that I am not a threat to the country.

Not the answer you're looking for? Browse other questions tagged uk customs-and-immigration passport-stamps or ask your own question.

45
Recently naturalized American visiting the UK, previously denied visa. Apply for entry clearance?
11
Should a visa-free national who has previously been refused a UK visa but is now visa-free apply for a visa for ALL future visits?
2
Will This Be A Problem With My UK Tier 5 Youth Mobility Visa?
1
Coded Landing Help

16
What does this pen notation in my UK entry stamp mean?
4
UK visit visa refused due to suspected funds parking. Best strategy to re-apply?
4
Entry Refusal - what does this stamp mean?
17
Why was I refused 'Leave to Enter' at an airport in the UK (and subsequently removed)?
12
Reapplying for a UK Standard Visitor visa after a refusal under article 320 (7a) (Deception)
26
Can a UK Border Immigration Officer remove a stop indicator flag?
31
What does this strange code stamp on my passport mean?