I have booked through different agencies a flight from the Tokyo Haneda airport to Munich Airport, Germany. The two different agencies have given me, based on my requirements, two tickets, but I did not verify that the flights and thus airplanes are actually the same.

It turns out that the same airline company, Lufthansa, is operating a flight departing at 12:45 and reaching Munich. There are two flight codes: LH4923 and LH0715. Like stated, they both take off at the same exact hour.

Is this normal? Could it be that only one airplane will actually fly? I would like to have the tickets I bought to be associated to the same airplane. I am not sure if I can make any changes on a short notice.

Can anyone confirm that these are indeed different airplanes departing for the same destination at the same time?

They are different flights.

LH4923 is a Lufthansa codeshare for a flight actually operated by All Nippon Airways as flight NH217: http://www.flightstats.com/go/Mobile/flightStatusByFlight.do?flightNumber=4923&airline=LH

It's uncommon, but not unheard of, for this to happen: for example, all 3 daily flights from Tokyo to Sydney depart within a few minutes of each other, two of them from the same airport (Haneda).

In this case LH 4923 is a codeshare flight operated by NH 217 (All Nippon Airways); LH 715 really is a different flight.

You can tell flights are codeshare as they will depart at the same time, from the same gate - but with different flight numbers, as depicted on this picture: 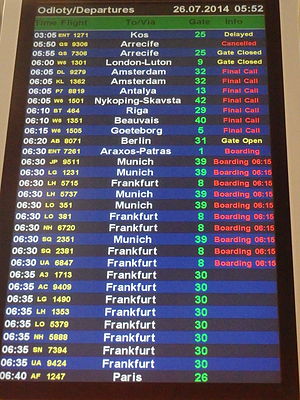 Lufthansa and ANA have a "joint venture" which enables them to coordinate prices and schedules, and share revenues, on routes between Japan and Europe. Therefore the extra capacity was deliberately organized to capture the high demand for travel at this time.

It is quite common for flights to clump together and depart at around the same time, because if a departure time is popular with customers, then of course everyone wants to put their plane on at that time to charge higher fares.

Not the answer you're looking for? Browse other questions tagged air-travel airports airlines bookings or ask your own question.