How to get to Patagonia from Buenos Aires?

I'm heading to Buenos Aires in a week and would like to get to Patagonia and back in 12 days.

I assume I've got to get down to El Calafate and from there we can organize trekking and visit the Perito Moreno glacier.

I'm on a budget, and it seems like flying and taking the bus is going to be around the same price, and both are pretty expensive ($200/person round trip). Would there be an advantage to taking the bus besides getting there quicker? (Nice scenery I'd miss from a plane maybe?)

Well firstly most buses won't go directly to El Calafate. You'll likely have to change buses, and likely will want to - it's a long way!

However, a convenient stopping point could be Puerto Madryn (Chubut). It's a great little beach town, with the Valdez Peninsula - and I kid you not - you can sit on the hostel balcony and point at the whales as they come near the shore! Some great seafood restaurants too.

If you're going to consider the bus, consider upgrading from Semi-cama to full-cama or cama-suite or whatever the bus company you choose calls it. Semi-cama is seats that partially recline. However for about $5 more from Puerto Madryn to Buenos Aires (that's the price difference it was for me) you can upgrade to full-cama, which gives you a seat that folds down into a BED, as well as good food, and tv. If you're on a strict budget don't bother, but once I discovered that, wow, it's so much better for the huge trips.

In El Calafate, I also highly recommend the America Del Sur Hostel - it had a spectacular view over the town and Lago Argentina, and you can organise trips to the glacier from their reception (we did a day tour to the glacier - it's spectacular).

Much of the flat part of Argentina is fairly boring scenery, but I liked the coastal route, and once you get into the mountains it's great. You'll spot guanacoes (like llamas) and rhea (like ostrich) and other animals. But I guess it depends on your preference, how you handle seriously-long bus trips, and how much time you have as well.

You only have 12 days. If you take a bus round-trip from Buenos Aires to El Calafate, you're going to waste 2-3 days getting there and 2-3 days getting back. That's almost half of your vacation on a bus! On top of that, a brief check I did of the price on the Andesmar bus via Puerto Madryn shows a round trip price of around $700 USD (depends on the seats) whereas LAN flies there round trip for around $500 USD.

Patagonia is an amazing place and you should try to spend as much time there as you can. The scenery in the interior of Argentina is spectacular for it's vast emptiness, but trust me after a few hours looking out the bus window you'll have seen enough.

I agree with most of what Mark wrote. However, instead of visiting websites of individual bus companies or going to the Retiro bus terminal, there's a far better way to find out the prices and schedules of intercity buses anywhere in Argentina:

Just enter origin, destination and date, and hit "buscar". If you want, with credit card you can also buy the ticket directly from the site & print it. 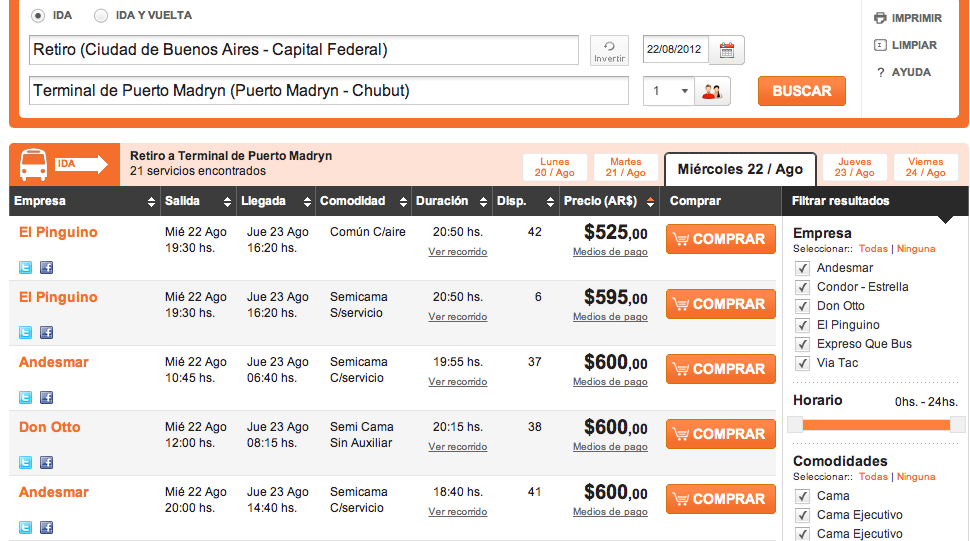 (If price isn't the main factor, I can also recommend Andesmar. Though I haven't tried most of the companies on the BA-PM route, like El Pinguino, Don Otto or Via Tac.)

For Puerto Madryn - El Calafate, Andesmar seems to be the only option with one daily bus; AR$ 835 (cama ejecutivo) or AR$ 950 (cama suite).

Good point by user27478 too. I think everyone should take at least one long-distance bus trip while in Argentina, but spending big part of your 12 days in buses probably isn't optimal. Still, of course you'd miss something if you fly. If nothing else, you will better appreciate the vastness of it all and maybe feel some additional sense of (In Patagonia type) adventure going by road. :-)

(One option: visit Patagonia later with more time, and go to perhaps Salta or Mendoza instead.)

Not the answer you're looking for? Browse other questions tagged budget transportation trekking buenos-aires patagonia or ask your own question.