I plan to visit Hong Kong and was also thinking of picking a few airsoft guns, as a collector I'm looking to get the most realistic looking guns for display.

So the problem is, I'm from the Philippines and I have no idea if I can bring the rifles from HK to Philippines.

I'm guessing I will have to deal with customs a lot.

For example, this airsoft: 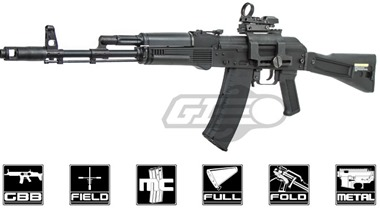 As a preface, the Wikipedia summary of legal issues in Hong Kong:

In Hong Kong, airsoft guns are considered toys as long as they are not able to be fired with a muzzle energy above 2 joules of kinetic energy, above which they are considered as a firearm and need registration, and possession of an unregistered firearm is illegal. Under the Section 13 of Cap 238 Firearms and Ammunition Ordinance of the Hong Kong Law, unrestricted use of firearms and ammunition requires a license.[1] Those found in possession without a license could be fined HKD$100,000 and be imprisoned for up to 14 years.[2]

Now, departure: for reference, let's use Hong Kong Airlines (you'd have to consult those of your specific carrier). For obvious reasons, carry-on baggage is out: you are not able to have a gun, real or realistic, in the cabin with you. It would have to be in checked baggage, as described in Restricted Articles:

Category 1. Guns, firearms and other devices that discharge projectiles. Devices designed to cause serious injury by discharging a projectile, or capable of being mistaken for such devices, including:

Your next challenge is returning to The Philippines. On May 29, 2013, President Benigno S. Aquino III, signed into law, Republic Act. No. 10591: “Comprehensive Firearms and Ammunition Regulation Act." Imitation firearms are included in the articles that require import clearance.

The Philippine National Police (PNP) Firearms and Explosives Office (FEO) gives the step-by-step proces, and online applications to expedite it. In advance of your travels, you may also want to contact the office directly by phone at (632) 723-0401 loc. 4588 or by email to service@pnpfeo.net

The Philippine Bureau of Customs includes replica and imitation firearms among the Regulated Articles which must be declared and appropriate procedures and permissions completed prior to arrival at Customs and Immigration.

Not the answer you're looking for? Browse other questions tagged air-travel hong-kong philippines firearms or ask your own question.

7
Is my Chinese visa reusable?
3
Where will I clear customs traveling from US to Greece and back via Toronto?
4
Leaving a country without entering another country and coming back
8
Buying a flight ticket from a different country
4
Flying from Halifax via London to India and back from Jeddah
1
Buying air tickets for another person in another country
1
Travelling from Botswana to China via Hong Kong
7
Can a Bangladeshi enter India by air from third country?
4
Baggage allowance with Air-Philippines from Manila - Ozamiz and Economy Supersaver ticket?