How much to tip in the United States?

Tipping customs in the United States can be surprising for people who travel there for the first time. It happened to me when I used a shuttle van service out of LAX a few years ago. To sum up the bias: I am French; a country where service charges are included and optional tips to waiters in restaurants are only a few euros.

Although I paid by credit card, the driver gave me a pen and a form on which I could write the tip amount. At that moment, I was really missing simple rules that could help me define how much a suitable tip could be.

Afterwards, I heard about different calculation tricks. Some people say it's 20%, others 18%; some suggest to double the sales tax.

Tipping in the US is much more common than elsewhere. In much of the US service staff are deliberately paid very low wages and expected to make it up in tips. Remember this when comparing prices in North America and Europe - the price of a restaurant may look low, but you are going to have to pay up to 20-25% extra on it.

I can't do better than recommend this Tripadvisor page. It squares with my experience. To summarize:

I find this article, Everything You Don't Know About Tipping, by Tim Urban of Wait but Why, to be the best I've found.

Even those of us who are native US citizens like him (or myself) often find ourselves in "ambiguous tipping situations", where we are not quite sure what the right amount to tip is, and want to avoid blunders such as:

Tipping is not about generosity. Tipping isn’t about gratitude for good service. And tipping certainly isn’t about doing what’s right and fair for your fellow man.

Tipping is about making sure you don’t mess up what you’re supposed to do.

(And though I like to be generous and fair, there's certainly much wisdom in that.)

He interviewed 123 people in New York City working in jobs that involved tipping, and then supplemented with information from "a bunch of readers" and research, including the website of Wm. Michael Lynn, recognized tipping expert and Burton M. Sack Professor in Food & Beverage Management at Cornell University's School of Hotel Administration.

This handy table breaks it down by tipping situation, percentage of customers who typically tip, how much low, average, and high tippers give, what the providers typically think of people who don't tip in that situation (fine, cheap, the worst), what percentage of their salary is typically provided by tips, and other helpful notes.

So basically, decide whether you want to be a low, average, or high tipper, and tip accordingly. 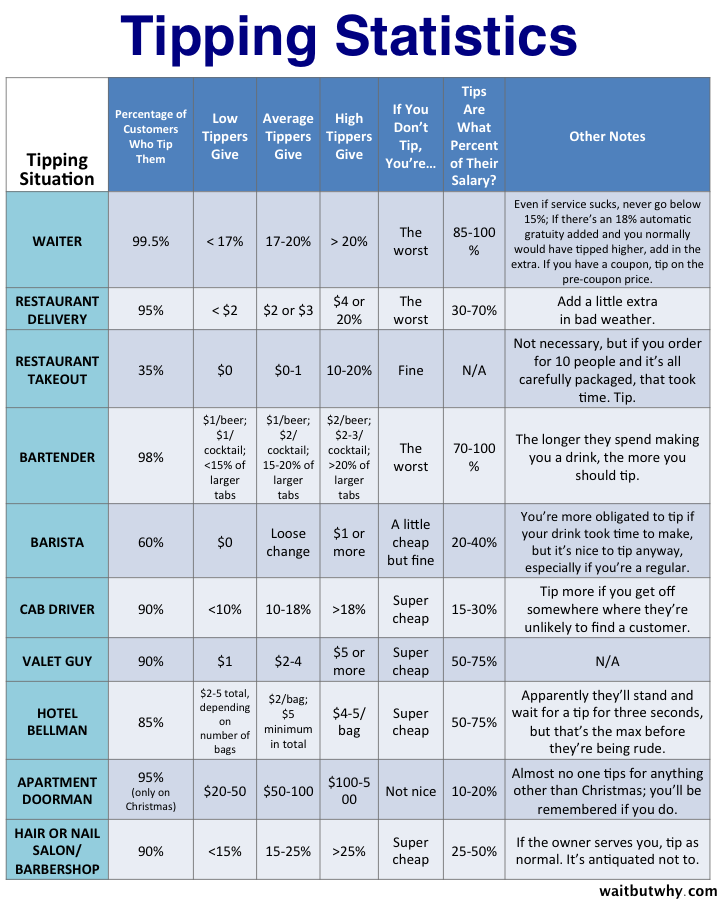 On his page is also included a handy table to help estimate the impact on one's budget of being a low, average, and high tipper, depending on if you're a low, mid, or big spender when it comes to buying tipped services, and other handy notes about factors that should influence the decision, and how it looks from the service provider's perspective.

The TripAdvisor page referenced in @DJClayworth's answer is also an excellent reference, and includes a few situations not included in Tim Urban's table and article. But Tim's table is just about the most convenient and informative guide I've found for most common situations in a format that provides more info on the server's perspective.

Is the rule the same for all occasions to tip, or are there different amounts depending for a table service restaurant, the tip jar of a fast-food restaurant, a bar waiter, a taxi driver?

Rules are not the same. In a restaurant it is considered typical to tip ~15% for an average service. If the service is good, go for double sale tax (in CA/NY at least). Some restaurants put the suggested calculations on the bill. For cabs, I usually round up to the next $5, unless there was something extraordinary (like the driver carried my bags 10 floors up or something). I never tip at fast food restaurants (I almost never eat there too, though). Jars - put a $1 bill, if you really liked the service - put two.

When someone gives outstanding service although not used to get tips, how much is appropriate? For instance, we had an airport car rental shuttle bus driver calling a competitor rental company for us to see if they had cars available, since the rental company of that bus was sold out.

I would say "thank you" is enough. It might offend people, if you give a tip in a situation usually not considered a "tip-giving" situation. But that's just me.

If gratuity is charged, I never add tips.

The gratuity is the tip. You can give more if you would like, but it is not expected.

As additional information, a restaurant may alternately stick a service change on your bill.

At one particularly obnoxious restaurant, my bill was increased by 11% tax, 18% gratuity and 18% service charge. I will never eat there again.

If I'm at a sit-down restaurant, then I generally tip 15-20% and round to the next dollar. I only tip my barista if I have a complicated order, or pay cash.

If I get delivery (pizza, Chinese, etc) I generally tip 20% rounding to the next dollar.

If I'm at a sporting event, I might slip the usher a dollar or two for "leading" me to my seat. Usually, when I get my hair cut, I tip $5. Same thing goes for valet parking.

If you get Full-Service gasoline/petrol (where an attendant pumps your gas for you), I believe that the custom is to just round to the next dollar (i.e if gas costs $34.34, you give them $35). That said, outside of New Jersey and Oregon, there aren't many full-service gas stations.

Also, I might leave a couple of dollars in an obvious place in my hotel room for the housekeeping staff. (I think when I went to Canada, I left a loonie and a toonie)

I don't use any other type of tipped services, so I can't give any advice there. But in the US, if you even think that someone is a government employee, NEVER TIP. It will be taken as an offer of a bribe, which is illegal.

Sources: These are the amounts that I personally tip, which should be a proper amount for most of the US.

Not the answer you're looking for? Browse other questions tagged usa local-customs tipping or ask your own question.

8
Should I leave a tip in a fully automated restaurant in the USA?
57
What is the tipping process in restaurants in the US?
63
Is it okay for a ticket seller in the USA to refuse to give you your change, keep it for themselves and claim it's a tip?
27
Is there a polite and correct way to give the wanted amount of tip in the restaurant when you have no suitable cash?
26
Is it customary to tip in Guam?
22
Does one tip in the US/Canada for bad service?
16
Do I tip differently in US states where tipped employees receive full minimum wage ($7.25/hr), rather than tipped minimum wage ($2.13/hr)?
9
How to tip in Israel?
4
Is tipping mandatory at restaurants in Canada?

16
When you bring someone to a restaurant in Russia
16
Is it rude to pay tips in Iran?
7
How much to tip in Mumbai or India general?
15
How to tip in Hungary/Budapest?
8
Should I tip my driver in Manila when somebody else is paying?
16
Do I tip differently in US states where tipped employees receive full minimum wage ($7.25/hr), rather than tipped minimum wage ($2.13/hr)?
2
How to tip a concierge or a hotel porter?
5
Tipping in the US when paying in advance
121
How can I find restaurants in the USA where tipping is not expected?
63
Is it okay for a ticket seller in the USA to refuse to give you your change, keep it for themselves and claim it's a tip?