Living in The Netherlands, I know my country is a crowded one. I typically can't leave a town for a couple of steps before arriving in the next one. So I was wondering,

Where in The Netherlands am I furthest away from any city or town?

I know that the Wadden Islands group of Rottum is a pretty good contender, but I want to limit this to the main land, where you could actually walk for a mile or so — neither of the islands is big enough for more than a stroll.

To know where you are the furthest from any building in the Netherlands is very simple.

Buildings in The Netherlands

First of all, you look where all the buildings in the Netherlands are. That is here. 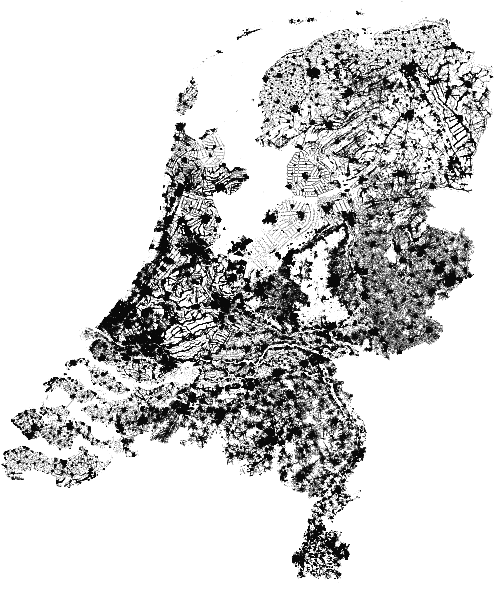 In this picture I represented every building in the Netherlands by a little almost transparent dot. So the black spots is where multiple of those spots overlap. You see some very nice structures in the map. The big white spot in the center of the country is the Veluwe that was mentioned in many other answers. But as you can see, the central part contains some buildings that might kill its top position.

So lets make all dots fully opaque to make sure we don't miss a tiny almost transparent dot. Which gives 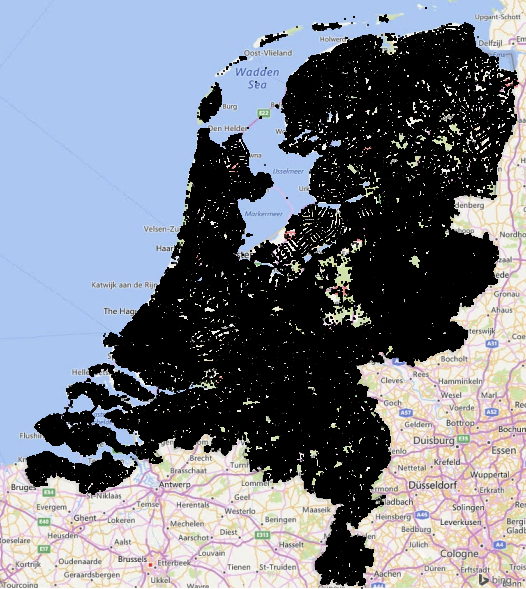 Now, we would like to know where we are the furthest from any of those buildings. One option would be to create buffers around each building and increase the size until only one bit of the Netherlands is not covered.
Or to rasterize and get for each raster point the distance to the nearest building. Details of those methods should be asked on gis.

I have used the poor mans version of a buffer: use bigger dots! If we quadruple the dots in size the picture becomes this: 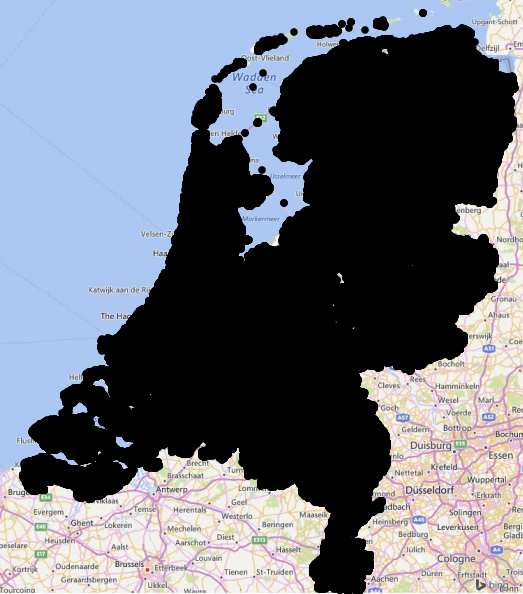 Now we see which places win. Technically it will be the Afsluitdijk and the Houtribdijk (between Enkhuizen and Lelystad). But those are just motorways on a tiny strip of land. That would be a very disappointing remotest place, so let's pretend we didn't see that.

On the islands it is the Eastern tip of Schiermonnikoog that wins. A very quiet place and you can take a decent walk, but the OP excluded the islands.

On the mainland there are four remaining interesting locations:

This is the furthest from buildings that you will get on the Veluwe. 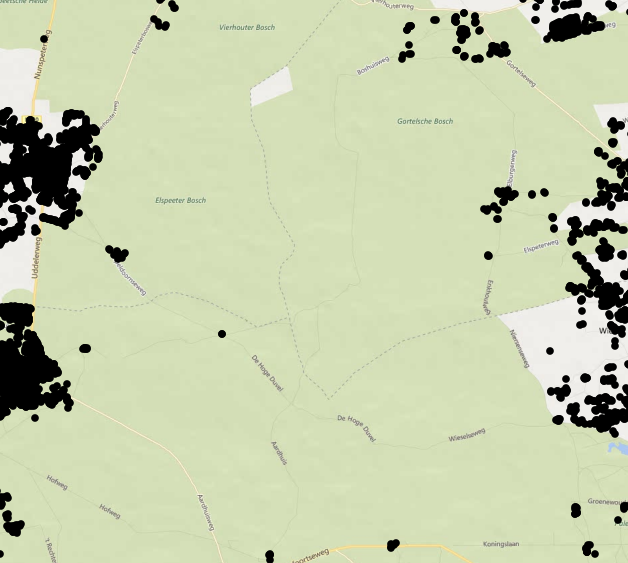 This is the region East of Elspeet. You will get there around 1.5 km away from any building. Not bad, but we had other promising candidates. 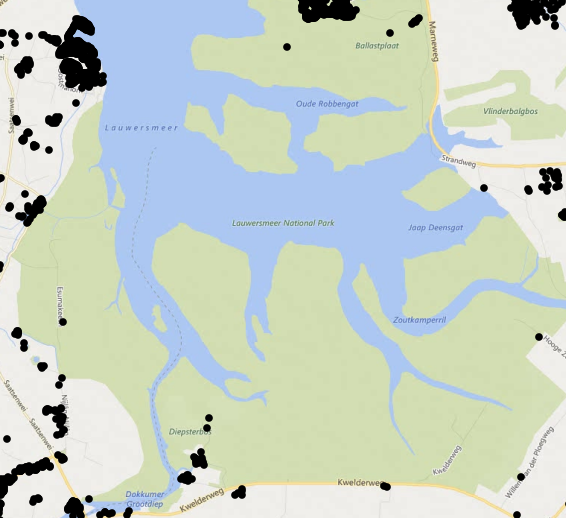 Hey, Lauwermeer is something we haven't heard yet in the other answers. It beats the more popular Veluwe. Smack in the middle you would be about 1.8 km away from any building.

After the great post by Belle we shouldn't forget the Verdronken Land Van Saeftinghe. It suffers a bit from the presence of buildings on the Eastern edge, but in the center you will get about 2km away from any buildings. 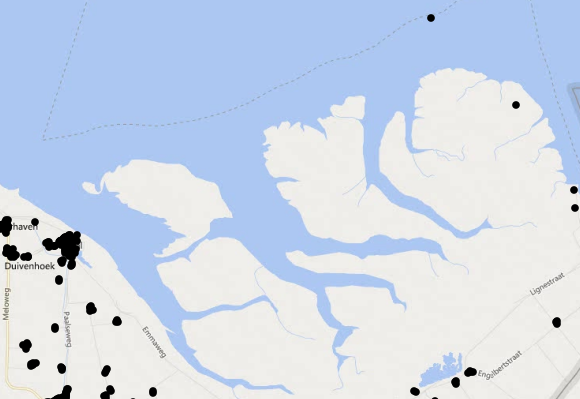 The Oostvaardersplassen are winning. 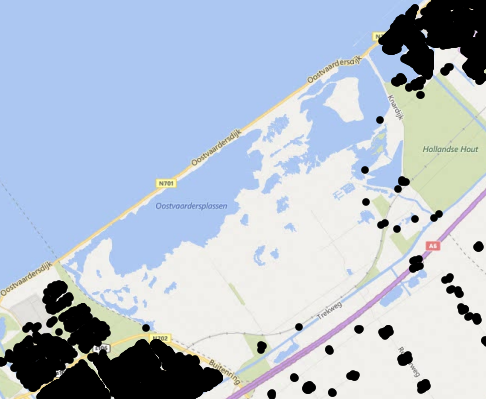 Where to take your walk?

For that little stroll that you had in mind, the Veluwe would be the best option. Neither the Oostvaardersplassen nor Lauwersmeer have walking paths near those remotest parts. They are easier to reach with a kind of boat of your choice.

What about built-up area?

That won't significantly change it. If you look at the maps, you will see that the nearest built-up area is not very far behind the nearest building for each of those places. You will probably get the furthest away from built-up areas by going to the North-Eastern corner of Saeftinghe.

The buildings were extracted from OpenStreetMap, using the most recent Geofabrik builds. In the Netherlands the buildings are in OpenStreetMap are very complete because the official BAG dataset was imported. In other countries the inconsistent quality of the OpenStreetMap data will be a big challenge to repeat this analysis.

The maps that were used as a background are the Bing Maps. All images are my own work.

Some more details, as per request

Download data from Geofabrik. I used the zip with the shape files. Open the shape file with the buildings in your favourite GIS. I used QGIS, but any half-decent GIS will do the job. Add the building layer that you downloaded. I also reprojected to RD-coordinates (EPSG 28992) and converted the layer to a point layer (in QGIS under Vector > Geometry Tools > Polygon centroids). That gives you slightly over 10 million points (10011369 to be exact). It makes the work cleaner and for our purpose the centroid of the building is more than precise enough. Under Style or something you will be able to chose the symbol that represents each point. I picked a black circle corresponding to about 1 pixel with 15% opacity. You have to play a little with the opacity. Too high and you get something like the second map. Too low and Flevoland becomes invisible. But a lower opacity would be better to get some more details in the cities or the Randstad. This is the point where you can be an artist.

For the rest it is merely increasing the opacity to 100% so that every point is obvious, increasing the size of the circle and zooming to the interesting parts. I did it on a 10 year old laptop. More recent hardware would have worked a bit more comfortable.

Possibly het Verdronken Land van Saeftinghe (Saeftinghe's Drowned Land), depending on your exact criteria. The closest municipality is Emmadorp, which is around 5-6 km away from the furthest point in Saeftinghe.

The closest town is Graauw, which is another 2 km further. The closest actual city is Hulst (which is still rather small), which is 10 km away from Emmadorp.

Why I picked Saefthinghe is not just because of its distance from civilization, but also because of how it shows how insignificant our civilization is. Under the sand in this swamp-like area is buried the town of Saeftinghe. Every few hours, with the rise of the tide, everything there gets washed away. Nothing can be built there, nothing can persist, except a few brave plants. Legend says, on foggy days, you can still hear the town bells call for help from the rushing tide that ultimately washed the town away.

Being the farest away from any build up area while still being on open land that remains land 24/7, I bet it is in one of the polders, with your best bet on the area between Lelystad, Almere and Zeewolde.
The distances are about the same as those in the 'Verdronken Land van Saeftinghe' answer, the land is always available, not claimed by sea/water at any time.

Where you might feel the most remote from buildings, the few forrests we have. I often walk in the Dunes, the area between Zandvoort and IJmuiden is best for this, there is the bigger area between Wijk aan Zee and Bergen where you find a few houses but once there are a few trees between you and them you forget about them.

I think there are also areas in the bigger forest reserves, like de Hooge Veluwe and de Veluwe zoom, but I am less familiar there.

For the furthest away from built-up area, I think the answer is a very unsatisfying one: the middle of the Afsluitdijk. There are no towns or villages along it. You will manage to get about 15km away from any significant group of houses.

You could go for a stroll for a mile, or even a few miles, but you probably won't find what you are looking for because you will be right next to a motorway.

I'll give the furthest away from any building a pass as there are a few buildings along the Afsluitdijk.

If you don't like middle of the Afsluitdijk or the Houtribdijk then I would suggest the banks of the Dollard in Groningen, north of Finsterwolde. Nearest village/hamlet (Ganzedijk or Woldendorp) seems 6.5-7 km away. There are some buildings (mainly farms) closer by.

Great question. I've been wondering about a similar thing: 'which point is furthest away from tarmac'. I'm not really into geospatial software, but I guess it's possible to calculate an answer based on Open Streetmap data. If I ever get around to doing that I'll update this answer.

Based on my experience, there are a few candidates on the Veluwe. But like the other answers, I don't know enough about other areas to give you a definite answer. We'll need some math to get that. Just judging from the map somewhere in the middle of nationaal park Veluwezoom would be a good candidate.

If you want to do a walk without seeing buildings, there is a trail from Hoenderloo to Radio Kootwijk. I guess that gives you around 7 km between the buildings on each end.

The north of the Netherlands might give you better result on the between towns part, but maybe not on the between buildings part because there are usually a few farms around.