Where do I find this building in Tbilisi, Georgia?

I'm looking for this place in Tbilisi. Does anyone recognise this and can point me to the right way? 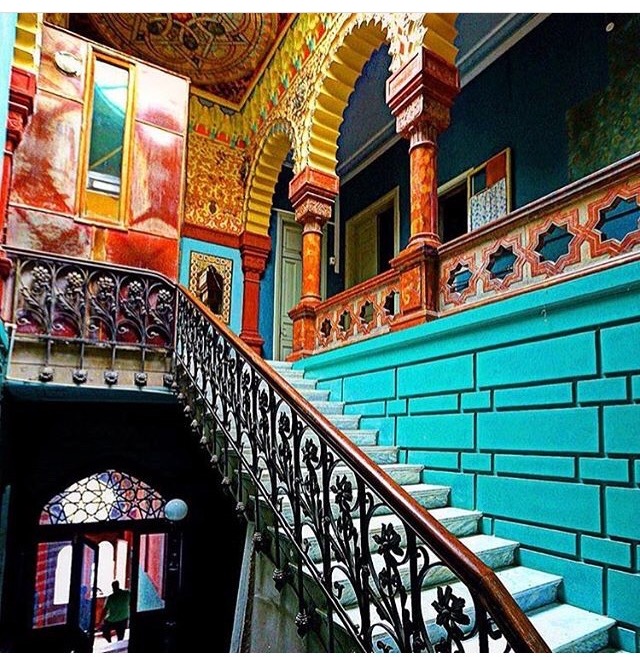 This is the Kalantarov's house from the early 20th century. The exact address is 27 Lado Asatiani Street , in the Sololaki district, just under Sololaki mountain where Narikhala stands. The closest underground station is Tavisuplebis Moedani.

It was designed by architect K.A. Sarkisyan and built in 1908 for Michail Kalantarov, a rich merchant living in the area. As far as I could trace, it is a private residence these days, but some say that you can get inside to have a look around.

There's a short film about it, available on YouTube here (in Georgian with Russian subtitles) - https://m.youtube.com/watch?v=8rephmjuSTc

Several Instagram accounts use this picture (you can do a reverse image search on Google) but I found none that indicates a precise location other than Tblisi Old Town.

A russian-language site geo-locates the picture here, but I can not verify that. The translation of the description reads:

Several buildings from XIX-XX centuries have been preserved in the old district of Sololaki. The city was actively developed and built to keep up with Paris and St Petersburg. Therefore a lot of attention was paid to details and, of course, the front entrance. A walk along the Asatiani street in Sololaki will lead you to the house of merchant Kalantarov, which was built in the pseudo Mauritanian eastern style. Be sure to take a look inside as the building was recently renovated. It is known that Michail Kalantarov had five children and he marked the birth of each of them by planting a cypress tree in the rear garden. After the revolution, the Kalantarovs family moved to France and new residents moved into the house.

This info is apparently taken from Stop 10 on Route 3 of this russian-language guide.

Searching for "House Kalantarova" in Russian gives some similar (but less photoshopped) results, which make the above location a credible suggestion.

The information about the Kalantarian family is slightly digfferent; The builder was not Mikhael but Mkrtitch Kalantarian(my grand grand father). He was born in Akouliss, lived and Baku and later came to Tbilissi. He lived in Brussels till he died. The name in official papers was in fact Kalatariantz. He came with his five sons to Europe and they settled not in France but in Brussels, Belgium. We visited the house in 1978. 18 families were then living in this same house.

Not the answer you're looking for? Browse other questions tagged where-on-earth identify-this georgia-country architecture tbilisi or ask your own question.

8
What would be the closest place to surf to Tbilisi, Georgia?
22
What was this ruined building in Tbilisi, Georgia that is Greek property?
15
Where can I find details of the bus between Tbilisi Georgia and Baku Azerbaijan?
11
Are there plans to reopen the cable cars / aerial tramways in Tbilisi Georgia?
2
Public transport from Tbilisi to Chiatura in winter?
5
Is there a bus from Tbilisi, Georgia to Thessaloniki, Greece?
7
Rail travel between Azerbaijan and Georgia
9
Is Tbilisi a good place to tour after this year's flood?
6
Baku-Tbilisi train
27
Where is this solitary building with a town and mountains in the background behind a valley?