Are visa applications from Chinese citizens commonly refused for lack of ties?

I am helping my girlfriend, who is a Chinese citizen living in China, to apply for a Swedish visa to come and visit me this summer. I visited her in China in the fall and had no trouble obtaining a Chinese visa with an invitation letter from her, but I suspect it may not be as simple the other way around. Specifically, I was troubled by reading this question and its answers.

Do Chinese people have lack of homeland ties such that their applications are 'commonly' refused?

First, let's have a look at the statistics as taken from Visa Statistics from Consulates 2013 and filter it for China...

...and it indicates an overall refusal rate of about 4%, or roughly 1 in 25 applicants were refused versus about 96% were successful. That's about 1,500,000 Chinese visitors for 2013. There are comparable figures for 2014, but these have not been formally admitted into the EU archives yet.

So there is nothing in these figures that indicate a prejudicial treatment towards the Chinese on face value. Referring to the same sheet, we can get the figures for Sweden...

...and see that Sweden has one of the higher refusal rates (about 8%) of the 24 members reporting their statistic.

From these we can conclude that Sweden is a tougher member than most of the others but there's nothing to indicate that the Chinese are subjected to prejudice one way or the other.

Finally, looking at the two Swedish consulates in China that accept Schengen applications...

...the refusal rates are broadly in line with Sweden's overall refusal rate. So your assumptions (i.e., "commonly rejected") are not supported on a broad level.

Your question then distils down to the individual reasons for each of the people who were not successful. We only know from empirical data that many refusals are caused by the lack of apparent ties which is in turn caused by genuine cases where the applicant lacks sufficient ties AND applicants who had sufficient ties to their homeland but failed to make this clear in their application.

On to your specific questions...

Is it likely that the migration agency will question her ties to China and refuse her visa application because they think she might not return?

They will absolutely examine her ties to China and if she does not qualify they will refuse. This is a matter of law and they are required to refuse when an individual does not qualify. The onus is on her to show that she qualifies (see Should I submit bank statements when applying for a UK Visa? What do they say about me? for any applicability it may have to visa assessment within the Schengen regime)

The required documents are usually sufficient but if you have something of particular significance, like an employment contract with the Chinese government, then by all means include it.

Is it a good idea to buy flight tickets in advance and include copies of them in the application? (I guess the return ticket signifies intent and economic feasibility of returning, but it would be a big waste of money if the application is refused.)

You need to read the Required Documents page again, where it says...

A booked return ticket (we advise you to delay payment until your visa has been granted). Please note that this is not required for visas for business purposes, short professional training, sports/culture, and visiting family/friends.

I will answer question 3.

After seeing the numbers in Gayot Fow's answer I thought it would be interesting to compare the numbers for different countries. Using the same data set, I made some figures to visualize the differences between countries.

The map below shows the total C visa refusal rate for each country with at least one Schengen consulate. I have set the maximum value to 30% even though some countries are significantly above that. There is obviously something strange going on with some of the Schengen countries themselves (For instance Denmark and Sweden has the highest refusal rates of all but there only a few hundred of them and they are almost all from the Norwegian consulates.), but apart from that I think this gives a general idea of how applicants from different countries are viewed on an aggregate level. 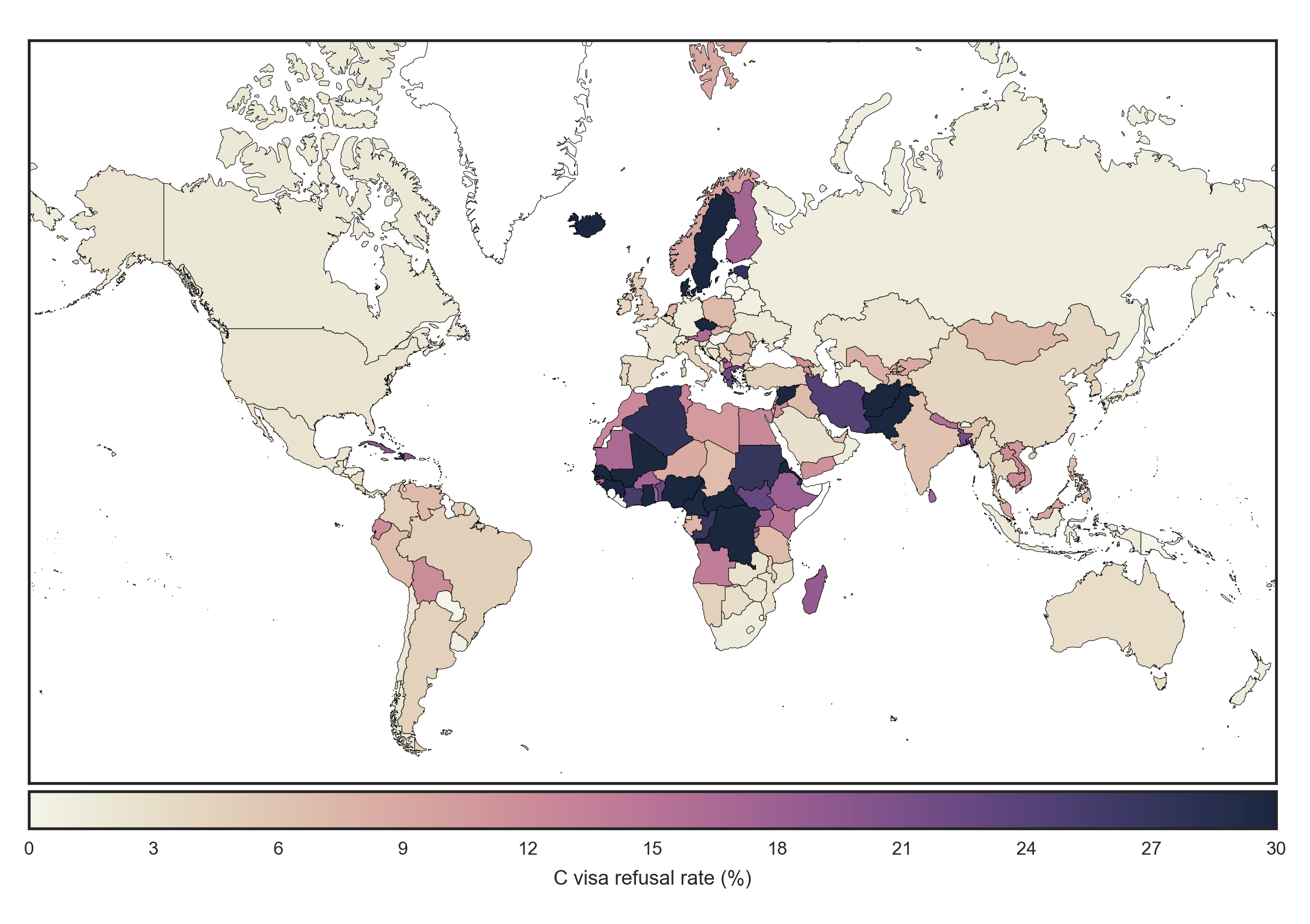 Below is a similar map but only for Swedish consulates. Obviously there are much fewer consulates so this may not add so much information compared to the previous one. The differences may be more noise than signal. 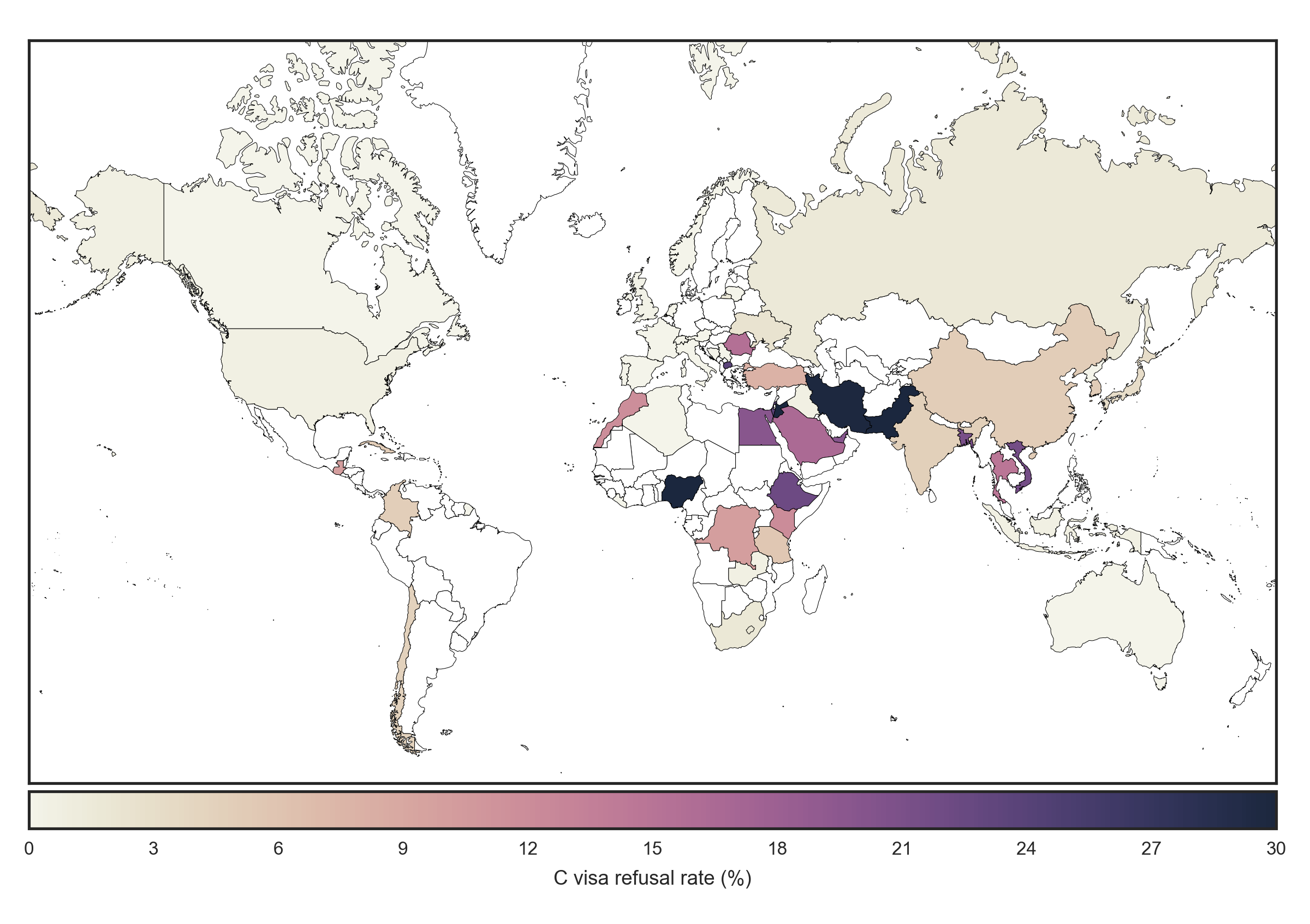 Of course, as was pointed out by pnuts, we cannot know how many of these visa refusals were due to "lack of ties". We also don't know anything about the "quality" of applications from different countries, i.e. the applicants' individual circumstances and how well they were documented. Hence, these statistics cannot necessarily answer my question directly.

Finally, I made a figure showing the refusal rate for each country from all the individual Schengen countries.

128
Should I submit bank statements when applying for a UK Visa? What do they say about me?
21
Kenyan citizen refused Schengen visa from Sweden

14
Do Chinese citizens require a visa to go to Hong Kong for less than 7 days?
1
Refused UK visa for the second time due to lack of ties. What are my options?
2
Hong Kong visa for overseas Chinese
3
Canada tourist visa for Chinese: will a friend's letter of reference help?
33
Which countries are visa free for both Chinese and Swiss citizens?
4
How to prove ties to country applying for a Schengen visa or to improve visa application to compensate for weak ties?
3
Chinese citizen, Canadian permanent resident visiting Taiwan from China, is Hong Kong the only way?
2
China visa for children with one Chinese parent; moving to China with children