What exactly are "repositioning cruises"?

A day or two ago I was chatting with some other budget travellers on the beach here in Oaxaca, Mexico, and one of them told me he came by sea from Portugual to Panama for a few hundred euros on something I'd never heard before called a "Reposition cruise" or "Repositioning cruise".

It's something to do with cruise ships being moved across the ocean just before the cruise season starts and just after it ends and they offer super low prices since it's out of season.

A repositioning cruise is a one-way voyage of a ship between two regions.

Most people take cruises where the departure and arrival port is the same. This is simple since only a standard return fare to the port is needed. Those cruises usually do a circuit in short segments, stopping almost every day at a different port.

Now since there are different low and high seasons in different regions, the cruise company needs to be able to move ships between regions in order to offer an adequate number of ships in each region according to the season.

When they do this, they offer passage on the ship moving between regions as a repositioning cruise. A cruise such as this one takes a route between regions and can spend many days at sea without any stops. For example, a friend got a Panama to Portugal cruise for around $350 USD which took two weeks and stopped in Colombia, St Martin and the Azores (IIRC) spending several days at seas in the Atlantic. Needless to say this is extremely cheap and includes all the amenities of a normal cruise.

Q: "What exactly are “repositioning cruises”?"

A Reposition Cruise is the sailing taken by a vessel when changing homeports. While they are sometimes marketed as special guest experiences, a repo cruise is an operational task.

The line will reposition as ship to follow demand, often to a relatively nearby port, but the repositioning cruise is a different thing.

Q: "It's something to do with cruise ships being moved across the ocean just before the cruise season starts and just after it ends and they offer super low prices since it's out of season."

NO. The distance involved is irrelevant. For example, ships are repositioned on the East Coast of the United States routinely.

Also, transoceanic cruises are often sold at a premium for destination ships such as Oasis (RCI) or Breakaway (NCL) Class ships. Small ships may appear discounted though.

Q: "Is this something done worldwide by all cruise lines or just by one or two in a certain area?"

YES, for major cruise lines. Regional lines, less so due to narrower scope.

Q: What are the very basic facts that all budget travellers should know about this seemingly almost secret means of travel?

First, there's really nothing secret about them. They are very common. Royal Caribbean markets Reposition cruises specifically for significant itineraries. But, other repo cruises are marketed as specific types such as Transatlantic. But again, many repo cruises at not noted at all unless you notice the difference in embarkation and debarkation ports.

But even that's not always an indicator, for example, Norwegian Epic will be sailing a Med circle where they will embark at both Barcelona and Civitavecchia but her home port technically Barcelona so her upcoming repo will be from Port Canaveral to Barcelona.

Just because a cruise is a repo does not mean it will be a 'budget' option. The line will sell passage at the highest fare they can. For example, East/West Coast US repos will command a much higher fare due to the Panama Canal transit. Specialty not considered, older, mid-sized ships would offer the best value.

Also note that while the line will sell passage on different segments, a round the world cruise rarely repositions the ship. For example, Queen Elizabeth's next RTW cruise departs and returns to Southampton despite offering ~15 one way Itineraries along the way.

It's something related to market's offer and demand. The cruise company needs to move the ship, which was in Portugal, to Panama because they can't use a Protoss warp gate (a sci-fi instant teleport).

So the ship is going to pay for fuel and crew. A lot of fuel. But there is no demand of traveling from Portugal to Panama in that period of the year, the next revenue generating cruise will start from Panama later.

What to do? The company has two options:

Of course doing a trip in "economical loss" is counterintuitive, but as I said the trip is needed and planned, and can't be avoided.

I believe all do. Advertising varies. It's not a secret, but companies don't really like to advertise under-budget trips when they offer thousand-dollars worth cruises.

Counter-examples in other industries and some personal experience

Aviation: air carriers will lower the prices of their flights if they have little to no demand for those legs. But the best example is the empty leg of private jets. Private aircraft that often carry business-people do not wait for their guests for days or weeks. Instead, they will continue their taxi service by moving to different airports in different locations. 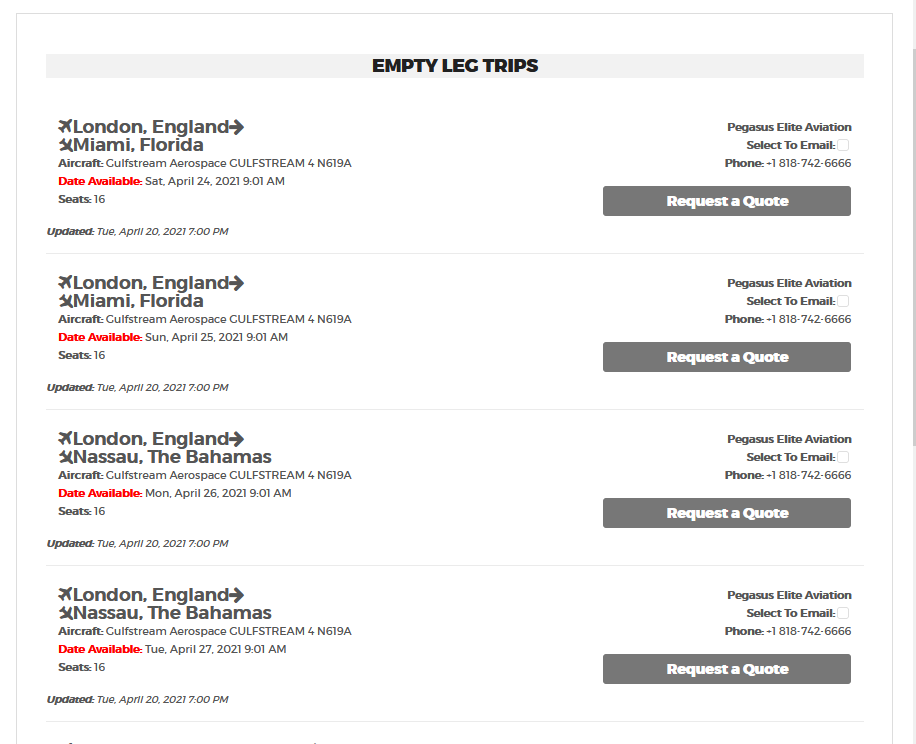 In this example, there is a flight that carried passengers to London but now needs to pick someone else at the Bahamas tomorrow. No one today is going from London to Bahamas (at the price of a private jet!) so they will say: whoever wants to cover some of our expenses is welcome

Automobiles: a great example is BlaBlaCar, a service run by a French company. Motorists that have already planned long-distance trips (e.g. NY to LA) can rent one or more seats to casual riders. The ideas are two: 1) the trip is already set by the driver, so that trip is happening, 2) the price of a BlaBlaCar trip is required to be cheap enough to barely cover the gas/tollway cost. And when I say barely, means driver are forbidden from making profit.

Disclosure: I am a BlaBlaDriver, ambassador level, black belt 🥋 of A wizard is never late, nor is he early, he arrives precisely when he means to.

I never heard of repositioning a train, but certainly rail companies will offer discounted prices on certain shifts happening at early morning or late evening, when demand is poor.

Traveling on budget is some kind of profession for some people. I have met some (Couchsurfers in the specifics) and I have been doing it in Europe before the pandemics. I believe that certain information should not be kept secret and be shared, but be warned that the job may be difficult. Traveling on budget always means adapting yourself to someone else's schedule and comfort level, journeying at absurd hours of the day, doing insane and/or long stopovers, and it's fun when you learn how to make them meaningful.

One could do this by spending hours on search engines, but I have learned from my own experience, on March 1st 2020, that sometimes taking a very cheap trip is not worth the PTOs you get from work (which can be quantified). I could speak for hours about this.

Not the answer you're looking for? Browse other questions tagged budget terminology sea-travel cruising or ask your own question.

7
Are there budget repositioning cruises from anywhere in East or Southeast Asia to Australia later in 2017?

12
What exactly are the differences between a National Park and a National Forest?
8
Is there a directory, list, or other way to search for ocean crossing cruises from all cruise lines?
6
What Exactly is Seat Width?
39
What Exactly is Self-Catering?
7
Do major celebrities who perform on cruises stay on the cruise?
1
How can I find what cruises pass Iceland?
2
Are there any transatlantic cruises between Québec and London, England?