I am travelling to Australia from Canada in May and I have to take connecting flights to get back to Canada. I stop in Auckland and San Fransisco.

Is there anyway for the people at the airport to know that I have an Iranian citizenship?

It may be worth noting that I don't look very Middle Eastern and my name isn't very Iranian either.

Note: this answer applies to Canadian citizens specifically, as in the case of the OP. See the answer by @chx for what seems to be the situation for everybody else right now.

As long as you travel on your Canadian passport, you are fine according to the Canadian governements' travel advisories for the US updated on January 29, 2017 - navigate to entry/exit and scroll down to dual citizenship:

Holders of Canadian passports, including dual citizens, will not be affected by the Executive Order on Protecting the Nation from Terrorist Attacks by Foreign Nationals issued by the White House on January 27, 2017.

Although the Candian Prime Minister has tweeted that the US national security advisor, Mike Flynn, has explicitly excluded Canadian dual citizens, there is a lot of uncertainty on the ground - so even if Canada may be an exception, it may be prudent to wait a few days for clarity before boarding a plane, if possible. 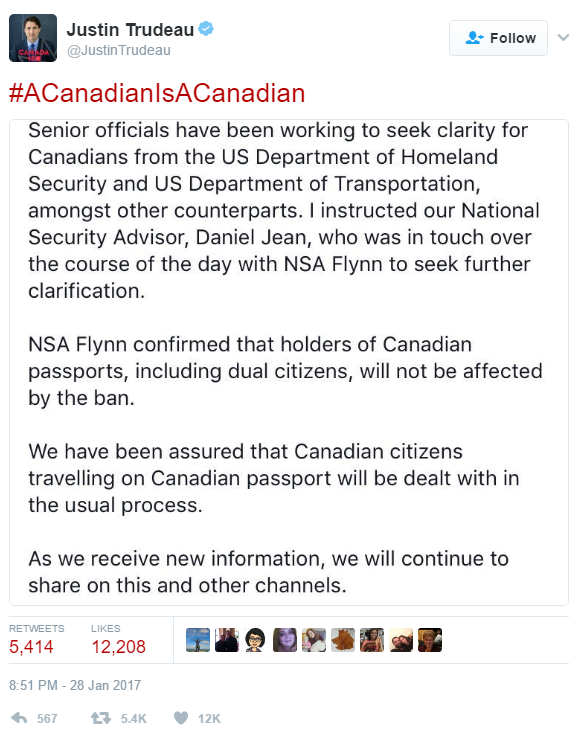 Senior officials have been working to seek clarity for Canadians from the US Department of Homeland Security and US Department of Transportation, amongst other counterparts. I instructed our National Security Advisor, Daniel Jean, who was in touch over the course of the day with NSA Flynn to seek further clarification.

NSA Flynn confirmed that holders of Canadian passports, including dual citizens, will not be affected by the ban.

We have been assured that Canadian citizens travelling on Canadian passport will be dealt with in the usual process.

As we receive new information, we will continue to share on this and other channels.

“Travelers who have nationality or dual nationality of one of these countries will not be permitted for 90 days to enter the United States or be issued an immigrant or nonimmigrant visa,” a State Department official said.

It also applies to people who originally hail from those countries but are traveling on a passport issued by any other nation, the official said.

Edit on January 30, 2017. In an Updated Guidance on Executive Order on Protecting the Nation from Terrorist Attacks by Foreign Nationals the US Embassy in the United Kingdom has this to say:

Beginning January 27, 2017, travelers who have nationality or dual nationality of one of these countries will not be permitted for 90 days to enter the United States or be issued an immigrant or nonimmigrant visa.

Emphasis mine. I am unable to find a similar guidance on the Canadian embassy site.

Yes, it seems so.

Omid Nouripour is a member of the Green Party in Germany and according to the SPIEGEL deputy of the German-American parliamentarian group, member of the management in the Atlantik-Brücke and member of the Deutsche Atlantische Gesellschaft which is the German part of the Atlantic Treaty Association.

According to the SPIEGEL article Nouripour is now unable to visit the USA because while he has the German nationality, he is also an Iranian because Iran does not allow to give up its nationality.

Nadhmi Zahawi, a British citizen, even has no Iraq nationality, but was still denied entry because he was born in Baghdad, Iraq.

If the ban is extended beyond the current 90 days, you are probably affected, like a German politician with both German and Iranian passport. It was reported that rescinding Iranian citizenship is nearly impossible. Note that he also holds a diplomatic passport, which reportedly doesn't help.

Omid Nouripour, a Green Party MP with German-Iranian citizenship, is reported to be one of ten thousands of German citizens believed to be banned from entering the US under new rules. Nouripour is the vice chair of the German parliament’s American-German group and a member of the steering committee of Germany’s Atlantic Bridge programme. (3)

So let's hope that the ban is not extended, which would mean that you could travel again in May.

Look at the statement by the US embassy in Ireland:

All US sources say dual nationals are denied but I would wait a few days for 100% clarity.

CBP put out a series of questions and answers on February 1, which said that the ban on entry and visas will only be enforced based on the passport that is presented by the traveler. Even if you have dual nationality with one of the 7 countries, it wouldn't matter as long as you present the passport of another country:

Does this Executive Order apply to dual nationals of the seven countries who want to enter the United States? If they apply for entry based on their citizenship from one of the countries NOT on the list, will they be allowed entry?

Travelers are being processed and, when eligible, admitted according to the travel document they present.

Can a dual national traveling with a passport from an unrestricted country travel to the United States?

Dual nationals with a valid immigrant or nonimmigrant visa in a passport issued by any country not restricted under the Executive Order will be permitted to apply for admission to the United States.

Can a dual national who holds nationality with a restricted country and is currently overseas, apply for an immigrant or nonimmigrant visa to the United States?

Not the answer you're looking for? Browse other questions tagged usa transit dual-nationality event-based-effects denial-of-entry or ask your own question.

110
How does President Trump's travel ban affect nationals of Iran, Iraq, Libya, Somalia, Sudan, Syria or Yemen coming to the US for tourism/transit/etc?
41
Can I be refused entry due to my place of birth?
21
Are dual US citizens affected by President Trump's ban on Iran, Iraq, Libya, Somalia, Sudan, Syria, Yemen?
21
I was born in Yemen, but to British parents and never had Yemeni citizenship. Can I travel to the USA under the Trump ban?
2
Canadians Iranian passport travel USA from Iran

110
How does President Trump's travel ban affect nationals of Iran, Iraq, Libya, Somalia, Sudan, Syria or Yemen coming to the US for tourism/transit/etc?
21
Are dual US citizens affected by President Trump's ban on Iran, Iraq, Libya, Somalia, Sudan, Syria, Yemen?
6
Dual Citizen (US-Iranian) seeking travel to Canada. Visited Iran 2011
33
Can I enter the USA? I have dual citizenship (Japan and USA), but I have been to Iran with my Japanese passport
3
What's different about the December 4 US Supreme Court ruling to allow the full travel ban to go into effect?
9
Do Italy and Canada share travel and citizenship information of dual citizens?
1
Can a dual citizen of UK/Canada with both passports travel to US from the UK without ESTA?
9
Dual citizen traveling to Canada and US