Are bus tickets acceptable for Air Asia as a proof of onward travel?

I will be flying with Air Asia from Bangkok (DMK - Don Mueang International Airport) to Cambodia (Phnom Penh). I have purchased bus tickets from the Mekong bus company as a proof of onward travel. They have sent me an email confirmation. 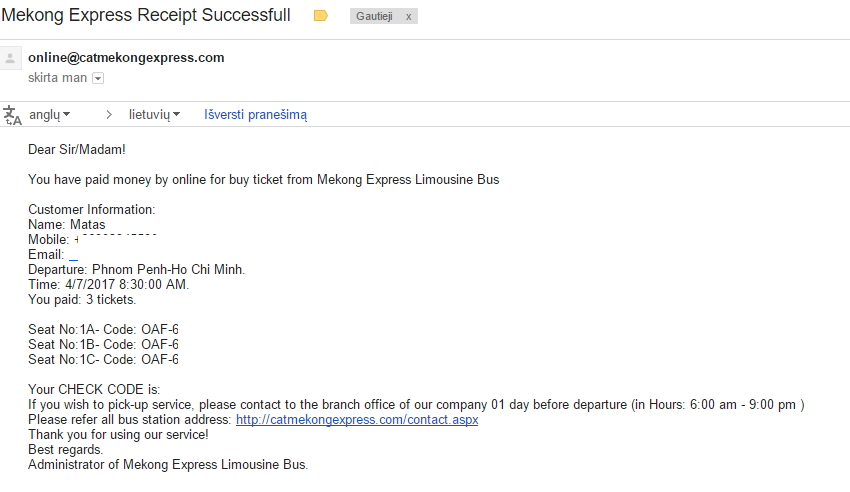 There's a word going around that bus and train tickets are not acceptable proof of onward travel and only airline tickets are.

Could someone confirm to have travelled with Air Asia and have used bus or train ticket as proof of onward travel.

I can't answer the general question, but for your specific case, at last check Cambodia does not require proof of onward travel at all.

Officially Cambodia's policy is possession of a "return ticket", which by definition means a ticket that takes you back whence you came on the same type conveyance. A "return ticket" is the most common specification for proof of exiting the country within the time allowed used by countries all over the world.

However, most countries will accept an "onward ticket" in lieu of a "return ticket", as it shows your exit plans from that country.

Unfortunately most airlines check-in policies mandate an air ticket as the only acceptable POOT (proof of onward travel). This is due in part to the fact that most buses or trains go to the border, you then cross on foot and pick up a different bus on the other side, so your bus ticket doesn't actually take you across the border (even though your reservation might). Whereas on a plane you clear immigration before embarking and can only disembark at the destination.

Also airlines have been in the game long enough to know that a $5 bus ticket to the border is a cheap way to try and get around the rules. And while people still buy cheap airfare as throwaways, the number of people scamming with this routine is much smaller.

All that said, it is really up to the check-in counter agent to determine if you meet entry requirements. Travelers have talked their way onto planes with only a bus ticket or a hotel booking. But likewise travelers have been left behind at the airport for the same reason. Do you feel lucky?

Not the answer you're looking for? Browse other questions tagged air-travel thailand cambodia proof-of-onward-travel airasia or ask your own question.

3
Must I have return or onward tickets when getting a visa-on-arrival Cambodia (Phnom Penh)?

24
What happens if you arrive in Malaysia with a one-way ticket but are asked for proof of onward travel?
3
UK Citizen travelling in and out of Thailand over a 31/32 day window: what visa will I need?
7
Proof of onward travel in Japan?
6
Who is responsible for a passenger being cancelled from a flight because an international partner airline never confirmed with the domestic airline?
3
Must I have return or onward tickets when getting a visa-on-arrival Cambodia (Phnom Penh)?
2
Going from Cambodia to Europe via Thailand and back. Do I need proof of onward travel for the return flight?
0
Is it possible to get Thailand visa in embassy in Malaysia or Cambodia without airline tickets or personal vehicle?
15
Who should I go after (Expedia, Finnair or Bangkok Airlines) for a missed flight?
2
Crossing the Cambodia/Vietnam border and single/multi entry visas
3
Connecting separate Airlines in Thailand