Where is the best possible location that I might have to hear humpback whale sounds?

This is kind of a follow up to my previous question, which was about where I can go for whale watching on budget within 3000 USD. I am from Bangalore, India. I want to hear the songs of whales (which are loud, melodic and very musical from what I have heard).

I know it is impossible to say where a humpback whale might start singing. But is there any place where there is greater probability of hearing these sounds along with watching them?

Try going to Hawaii in late February and March. That is when the Humpbacks are most commonly seen, young and their mothers spending lots of time near the surface, the males deeper down.

To hear the song best you need to be underwater, so having some diving training and certification helps. But snorkelers can also catch some of the sound.

Airfare will unfortunately eat up a bunch of your budget going that far, so you will need to shop carefully ;-)

I would like to suggest one of two location. One being that of Hawaii and the other being that of the Gulf of Maine. Hawaii is probably your best place to hear the song of the humpback whales.

During the summer months which is their feeding season these whales can be found inhibiting the colder regions of the world such as Alaska and Antarctica where large quantities of fish, squid and krill can be found.

Once the winter time rolls around and large ice caps begin to form these whales can be seen migrating to locations such as Hawaii and the Gulf of Maine where they spend the majority of their time mating and bearing offspring.

Here is some more information on the North Pacific stock of the humpback whales:

Most of the North Pacific stock of humpback whales winter in three near shore lower latitude mating and calving areas: Hawai‘i, Western Mexico and the islands of southern Japan. During the spring and summer they migrate as far as 3,000 miles to feeding areas over the continental shelf of the Pacific Rim, from the coast of California north to the Bering Sea (between Alaska and Siberia). Humpbacks continuously travel at approximately three to seven miles per hour with very few stops. The main Hawaiian Islands may contain the largest seasonal population of North Pacific humpbacks in the world.

Hawai‘i is the only state in the United States where humpback whales mate, calve, and nurse their young. Humpbacks may find Hawai‘i suitable because of the warm waters, the underwater visibility, the variety of ocean depths, and the lack of natural predators. Mothers can be seen breaching alongside their calves and males can be seen competing with one another for females in fierce head-to-head battles. - Where the Whales Go. 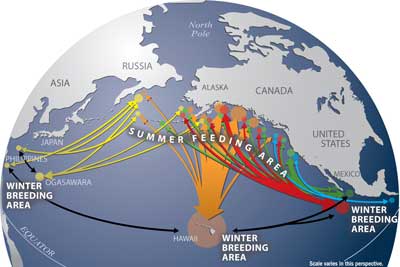 Not the answer you're looking for? Browse other questions tagged nature-and-wildlife whalewatching or ask your own question.

10
How can I choose a good destination to see whales, especially blue and humpback, preferably from a boat?