Can you fairly quickly get a Visa-on-Arrival in Cairo Airport around midnight?

Currently there seem to be quite a lot of good value fares for departures from Egypt, and it looks like I should be able to save a fair bit on a planned trip if I break my journey into two tickets and fly via Cairo.

Having read about some interesting experiences with airside transit at Cairo, I was planning to fly in one evening, then depart on a different ticket this next morning. As I'll be changing tickets, that overnight break should give me enough time to still make the 2nd flight in the event of delays, and also means I don't have any issues with trying to through-check luggage between tickets (I'll just collect and re-check)

Based on the FCO guidance and the Egyptian Embassy in London's website, I gather that EU citizens (+ some others) are able to get a visa-on-arrival in Cairo. That's as an alternative to getting a visa at the embassy before, which seems to be a bit more expensive plus takes longer.

With about 10 hours between one plane arriving and the next leaving, and a desire to get as much sleep as possible in a hotel by the airport, spending an age queueing up to get a visa-on-arrival wouldn't be much fun. (If it's as bad as Colombo airport in Sri Lanka on previous trips, I'd barely make it out in time to check in for the next flight!). However, if it's nice and quick to get one though, then that'd be better than 2 trips to the embassy.

What is the typical situation with getting a visa on arrival in Cairo airport late at night, eg 11pm-1am? Is it fairly quick and easy, or does it tend to have huge queues with lots of delays and formalities?

Based on only one instance that I can now remember (I suspect I have forgotten others, though more recent, for being such 'non-events') at shortly after 2 a.m. the VOA process took me less than one minute - I was presumably one of the first off the aircraft. However even less than one minute was enough time for others exiting the aircraft after me to have beaten me to Immigration, where there was a queue, so presumably not many passengers required VOAs.

From memory there were two VOA counters available but only one in use. So if one of the last to disembark it may take quite a lot longer. However I doubt that a little over two hours earlier (ie midnight) would have been much different, unless other aircraft were then discharging passengers.

It might have been at a time when few tourists were visiting Egypt and hence most of the passengers were Egyptian nationals.

Even had the VOA process taken a lot longer I doubt I would have left the airport any later, the delay is usually for luggage so how long to get to the carousel makes no difference.

This is exactly as I remember it: 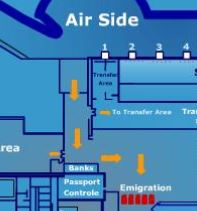 right down to the bypass gate between 'Passport Control' and 'Emigration' attended by a couple of loiterers and with a stream of people passing through it. The only difference is that the narrowing of the vertical corridor appeared to be greater than shown on the map (maybe because I'd turned sharp right to reach that corridor so turned into what is on the map its left side, hence needed to zigzag at the narrowing.) The vertical corridor was quite dark, but 'Emigration' and its holding area less so. 'Banks' (the two counters) was where I exchanged £10 or $15 for a receipt filled in by hand. I think I may have received a few coins in change.

Not the answer you're looking for? Browse other questions tagged visas-on-arrival cai or ask your own question.