Are cyclists allowed to use National roads in South Africa?

Can I cycle from Cape Town to Colesburg along the N1?

South Africa's Arrive Alive site says that no cyclists are allowed on freeways, but is the (entire) N1 a freeway?

Google maps seems to say yes to cycling on the N1 starting from Worcester. The first 130km from Cape Town are over Wellington and Bain's Pass.

Found this blog entry. The man traveled on the N7 with his bicycle. Screen shot of the route.

Whether or not cycling is allowed depends more on the type of road than how it is named.
Since you're already aware that "no cyclists are allowed on freeways" and you suspect that the entire N1 may not all be a freeway, you're half-way there.

Freeways in South Africa are designated by one of these 2 signs: 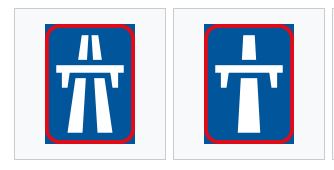 So if the road you're on does not have one of these at least every few km, then you're not on a freeway and the no-cyclists-on-freeways prohibition doesn't apply.

So unless there's another prohibition preventing it, you should be allowed to cycle on the N1 on any section which is not designated a freeway.

If you'd like to start your trip closer to Cape Town, you could follow the R101 out of Belville as this road parallels the N1 for large sections and in some areas like the DuToits Kloof Pass actually is the original N1 route from before the Huguenot Tunnel was built.